"What are you going to do with a liberal arts degree?"

This is the question students attending the inaugural College of Liberal Arts ‘Connecting College to Career' night were hoping to answer. The University of Nevada, Reno event hosted a variety of panelists who hold liberal arts degrees to discuss how valuable a liberal arts degree can be in the job market.

Dean of the College of Liberal Arts Debra Moddelmog hoped that the event, held Wednesday, Oct. 4, in the Joe Crowley Student Union Milt Glick Ballrooms, would provide relief to liberal arts students who may be concerned about the job market, especially with the changing job landscape of Reno.

"Reno is changing very rapidly with a lot of influx of tech-oriented business and a lot of emphasis on STEM majors and STEM careers," Moddelmog said. "So we want to make sure people don't lose sight in the fact that a liberal arts degree is still a really fabulous degree to have for the job market."

The panelists provided their own insight for students looking into the future. Aaron Benedetti and Karen Vibe both received liberal arts degrees from the University, but both have different outcomes out of college.

Benedetti received a bachelor's of arts degree in English with a minor in political science from the University, and is now on track to pursue his doctorate degree. He provided insight for students trying to articulate their worth.

"This is why it matters to people who don't know the discipline or don't see it as valuable," Benedetti said. "This is quintessentially the problem that liberal arts people have articulating their qualifications to a STEM employer." 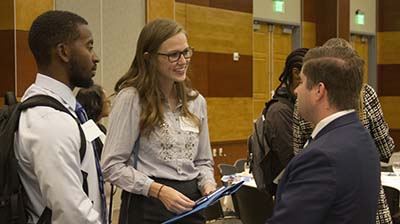 Vibe has had an unusual track from her studies to career, as she has a master's degree in music from the University but currently works for Morgan Stanley as a financial advisor.

"Regardless of your major, if you have a passion for something in life and you're going to the University to get more knowledge on that passion it can be directly correlated to anything in the workforce," Vibe said.

Students at the event enjoyed the opportunity to network with the panelists and professors at the University. Alec Brown, an English writing major and journalism minor, feels more comfortable now with his future career goals with his liberal arts degree.

"This event has been fabulous; it is such a good opportunity to hear that the liberal arts is totally a viable option and the scope of this event really verifies that," Brown said. "These are people who have been through so much and they're here to tell you that it okay to choose a liberal arts degree and still have a career in the end."