College of Science receives $1.5 million from DOE for Phase III of project to find “blind” systems

College of Science receives $1.5 million from DOE for Phase III of project to find “blind” systems

The University of Nevada, Reno received funding to begin drilling geothermal test wells this fall in the final phase of a multi-year research project to refine exploration strategies and reduce the risks in developing new geothermal systems capable of producing commercial electricity in Nevada's Great Basin.

In July, the Department of Energy announced  funding for the continuation of the Nevada Play Fairway Project, which seeks to find geographic areas over which the most favorable combinations of heat, permeability and fluid are thought to exist, but no obvious surface signs would indicate an underground geothermal reservoir. These are known as "blind" or "hidden" geothermal systems and are thought to represent the bulk of the region's geothermal resources. These blind systems don't have wet marshy areas or other surface clues, such as hot springs or fumaroles spouting steam.

Phase III moves the project into an exploratory drilling campaign that will test the ability of the models developed in Phase I and II to discover new resources. The University, through their Nevada Bureau of Mines and Geology, received $1.5 million from the DOE to finish the third and final phase of the renewable energy project.

"We're excited to be chosen to continue this work," Jim Faulds, lead scientist on the project and director of the University's Nevada Bureau of Mines and Geology, said. "We are striving to improve exploration strategies for conventional geothermal systems in order to facilitate development of new geothermal power plants at reduced risks and costs to the geothermal industry." 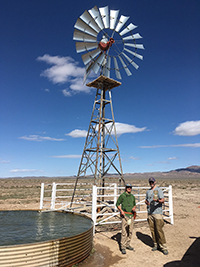 The Play Fairway project, administered by the DOE's Geothermal Technologies Office, has the promise of yielding significant results to target geothermal well sites with temperatures greater than 130 degrees Celsius (266oF), the typical temperature for a productive well to produce electricity. The project seeks to identify new, economically viable geothermal systems in the state. Geothermal is truly renewable energy. Conventional geothermal systems extract the hot water from underground, exchange the heat and return the fluid back underground.

"There is potential in the Great Basin for much greater amounts of geothermal energy than the current 670 MW produced from the 25 power plants already in place," Faulds said. "The geothermal wealth of this region can be attributed to its active faulting, which allows hot fluids to rise more quickly to levels accessible through drilling.  The Play Fairway project can potentially provide a catalyst for accelerating geothermal development in the region."

"Due to its tectonic setting, Nevada is richly endowed in geothermal resources," Faulds, who is also the Nevada State Geologist and a professor in the University's College of Science, said. "However, many of the obvious sites, for example near surface hot springs, have already been discovered. Because most of the geothermal resources in the Great Basin region are blind, it's important to characterize the favorable characteristics of the known systems and then utilize that information to discover new systems hidden beneath the surface."

Mapping Renewable Energy
The Play Fairway Project began in 2015 with mapping and analysis of a 40,000 square mile section of the Nevada Great Basin, which identified a few hundred viable sites for geothermal activity using nine critical parameters. In the second phase of the study, Faulds and his team - which includes several other faculty, graduate and undergraduate students at the University - scoured their geothermal potential map and narrowed the study to 24 of the most promising sites in several areas and then narrowed that to five particularly promising areas. They found evidence for commercial-grade geothermal systems at all five of these sites. Phase III will now test their methodologies with drilling at two or possibly three of these sites.

To choose the final sites for drilling, the team looked at proximity to existing electrical transmission corridors, excluded sensitive habitat and wilderness areas, and reviewed permeability factors and other geological, geophysical and geochemical features indicative of geothermal activity.

"In Phase III, we'll do the drilling to test the methodologies that we've used in phases one and two," Faulds said. "We'll be drilling temperature gradient wells, to see if we have hot water, from about 500 to 750 feet deep. Full development of a geothermal system usually requires drilling to much greater depths (a mile or more) and is much more expensive, but the presence of commercial-grade systems can usually be identified at 500 to 750 feet deep. If proven, this play fairway methodology then can be adopted by companies and they can invest in exploration and development with more confidence."

The first two drilling sites are in northern Granite Springs Valley, about 25 miles west of Lovelock, and in southern Gabbs Valley, southwest of the town of Gabbs. The other sites are in the Sou Hills just north of Dixie Valley, Crescent Valley and Steptoe Valley.   The team will initiate drilling this fall and finish by the end of next summer. They will also complete new geophysical surveys, with the nine attributes as a guide. The final report is scheduled to be complete in March 2019.

Other institutions selected to continue their Play Fairway project are Utah State University, University of Hawaii, University of Utah and Washington Division of Geology and Earth Resources.

"The work conducted by the University of Nevada, Reno under the Play Fairway program has resulted in the advancement of geothermal exploration technologies and the discovery of several new and exciting geothermal prospects within the Great Basin," Michael Weathers, Technology Manager with the Department of Energy's Geothermal Technologies Office, said. "This work has delivered a blueprint for managing risk in geothermal exploration that can be applied beyond the Great Basin to expand our domestic energy resources. GTO looks forward to monitoring this methodology as it is validated in the upcoming drilling phase of the project and the eventual adoption by others in the geothermal industry."

Three decades of helping children and teachers across Nevada with unique, complex needs

Creating behavior detectives: methodology for teachers and caretakers to look after infants

Detailing how and why modern teachers should be investigating problematic behaviors

Most ever CAREER Awards received by University faculty

The civil engineering doctoral student is also a GAANN Fellow focused on improving the earthquake-resiliency of structures to reduce their carbon footprint.