The Great Basin Center for Geothermal Energy got a new director last spring, and she travelled a long road to get to her new post.

Bridget Ayling was born in New Zealand. She has worked in Australia, Papua New Guinea, the United States, Mongolia, India and Antarctica.

"I've been really lucky to travel to some amazing places through my job, and get to some pretty rugged locations to do science," Ayling said. "Everywhere you go, every country you go to, it's a different landscape." 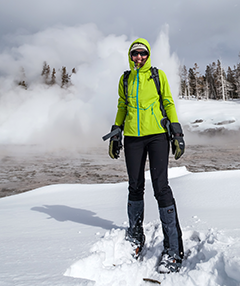 The high desert of the Great Basin is the latest landscape to welcome Ayling, who has been interested in geology from a young age. Early fascination with limestone rocks and the fossils contained therein was met with encouragement by her parents, who fostered it with the gift of numerous earth science books.

Ayling has spent over a decade working in the geothermal energy sector, most of that time for the Australian government. After dabbling briefly in the oil and gas industries, she saw the post at the GBCGE as a unique chance to get back into the geothermal work that she loves.

"Nevada is a state that has many geothermal resources," Ayling said. "We're really richly endowed with geothermal."

Since her arrival at the University, Ayling has been hard at work on a number of projects, such as reviving the National Geothermal Academy, which operated on campus from 2011 to 2014 before going dormant for the last two years. The academy is a summer program where students spend time studying geoscience and engineering topics relevant to the exploration and development of geothermal resources. In 2017, the NGA will be offering two courses: geothermal drilling and geothermal reservoir engineering. She is also a faculty member in the Nevada Bureau of Mines and Geology.

Additionally, Ayling has been working on the Frontier Observatory for Research in Geothermal Energy (or FORGE) project, a Department of Energy initiative seeking to develop a field test site for geothermal system technology development and testing. A site in Fallon was one of five potential test sites initially chosen by the DOE, who narrowed their options to two in September, with Fallon being one of those sites. Ayling and the GBCGE are involved in the Fallon project led by Sandia National Laboratories and are currently waiting to see if the site is the one ultimately chosen by the DOE.

As of the fall semester, Ayling has not taught any classes, but that is set to change in the spring. Ayling's class, Geology 407/607, will focus on Earth's energy resources. She describes it as "a pretty ‘big picture' course."

She is also working to set up her own independent research that will shape the center.

"It takes time to build a team and I have visions for what the Great Basin Center can be in the future," Ayling said. "It's going to take time to realize that and actually get the funding to support it. Some of my key activities so far have been conducting outreach to raise awareness of the center, and presenting talks at public forums, such as the Geological Society of Nevada, the Desert Research Institute and at conferences. The Center exists, I'm here, and am hopefully going to take it to some pretty cool places."

University research professor Jim Faulds, a colleague of Ayling, is very happy about the work that she has done so far, and the work that lays ahead.

"She has hit the ground running at the University and is already pursuing many new opportunities in geothermal research that will earn enormous rewards for the state and Great Basin region," Faulds said.

"The Great Basin Center is an exciting place to be," she said. "I am thrilled to be here at UNR, working in one of the most promising geological regions in the USA for geothermal energy."