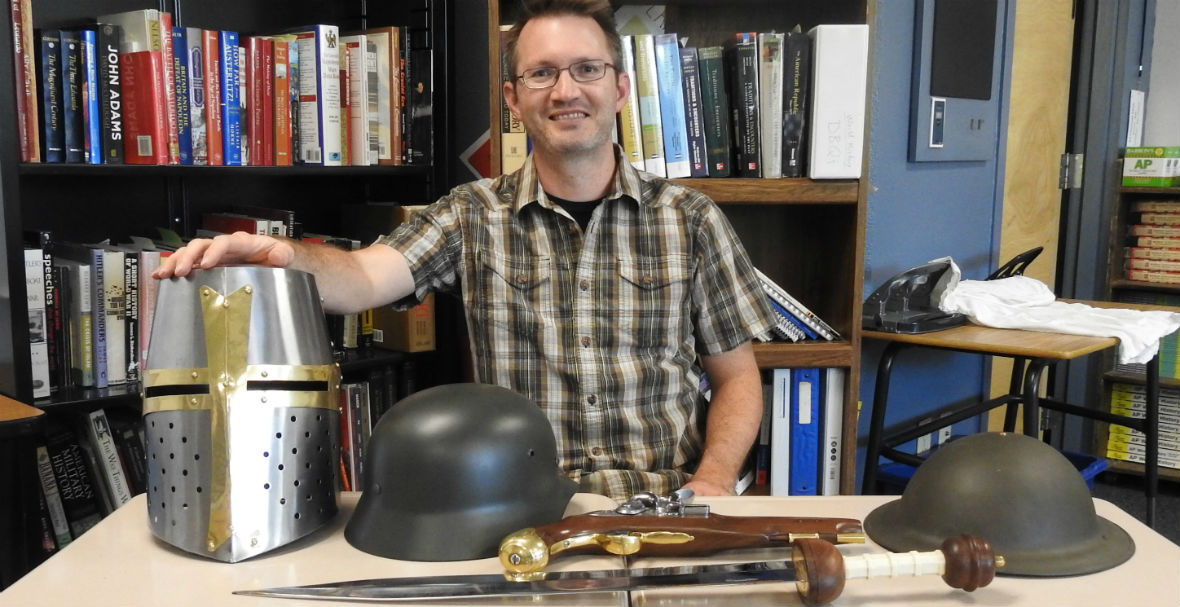 Ethan Petite, a 2000 University of Nevada, Reno alumnus and social studies teacher at Douglas High School, has been named the 2017 Nevada History Teacher of the Year, an award presented annually by the Gilder Lehrman Institute of American History, the nation's leading organization dedicated to K-12 American history education.

Inaugurated in 2004, the History Teacher of the Year Award highlights the crucial importance of history education by honoring exceptional American history teachers from elementary school through high school. The award honors one K-12 teacher from each state, the District of Columbia, Department of Defense schools and U.S. territories.

Nevada native Petite attributes his success in teaching to two factors: a love of public service instilled in him by his parents and the educational experience he received through the University's College of Education back in the late 1990s.

But Petite didn't come to the University directly from high school; he was accepted to the West Point Military Academy and attended before discovering his calling was elsewhere. As a young man exploring his career options, he attended Western Nevada College and then the University of Nevada, Reno where he became hooked on history after taking a few general education history classes.

He fell into teaching while coaching track at Douglas County High School, his own alma mater, where he graduated in 1995.

"I fell in love with the Educational Leadership 101 class taught by Kathryn Obenchain, who was new to the University at that time," he said. "She would model teaching activities with us and then break it down into hands-on experiences."

He said he is grateful to the University's College of Education because "it offered practical experience and I was ready to hit the ground running...I was very comfortable when I started student teaching."

Other sage career advice he received from the College of Education at the University: learn to teach two subjects for flexibility. He chose English and speech along with social studies, which was his passion. He taught English for several years at Carson Valley Middle School before moving over to Douglas County High in 2005 to teach history and social studies.

In order to keep his students interested in history, a topic they hadn't experienced personally, he knew he had to make it interesting and fun, while still meeting the educational requirements. He started buying historical artifacts - authentic or reproductions - such as crusader and Roman helmets and chain mail. What he couldn't buy, he figured out how to make.

"With the artifacts in hand, I'd ask them to compare-and-contrast or figure out how they were made or the note the changes over time," he said. He even invited a Spanish sword instructor to class to demonstrate sword fighting techniques.

A cabinet in his classroom now holds those artifacts, with more arriving each semester.

Petite's work with students has included U.S. Government, World History, World History Advanced Placement, and a new course he developed with input from his students, called History of Human Conflict.

Petite said he didn't have to encourage the students to sign-up for this class because they were already enthusiastic, having been involved from the beginning by providing their ideas.

"You get better student work when the students get to choose the topic or subject (within the curriculum parameters)," he said.

To help students learn about the Civil War, he reached out and invited re-enactors to Douglas High.

For their final class projects, students had to research and build an artifact from the era they were studying.

This fall, the 2017 National History Teacher of the Year will be selected from the pool of state winners and presented by Pulitzer Prize-winning historian Eric Foner at a ceremony in New York City. Past presenters at the ceremony include the Honorable Sandra Day O'Connor, Good Morning America's Robin Roberts, First Lady Laura Bush, former U.S. Secretary of Education Arne Duncan and former New York City Mayor Michael Bloomberg.