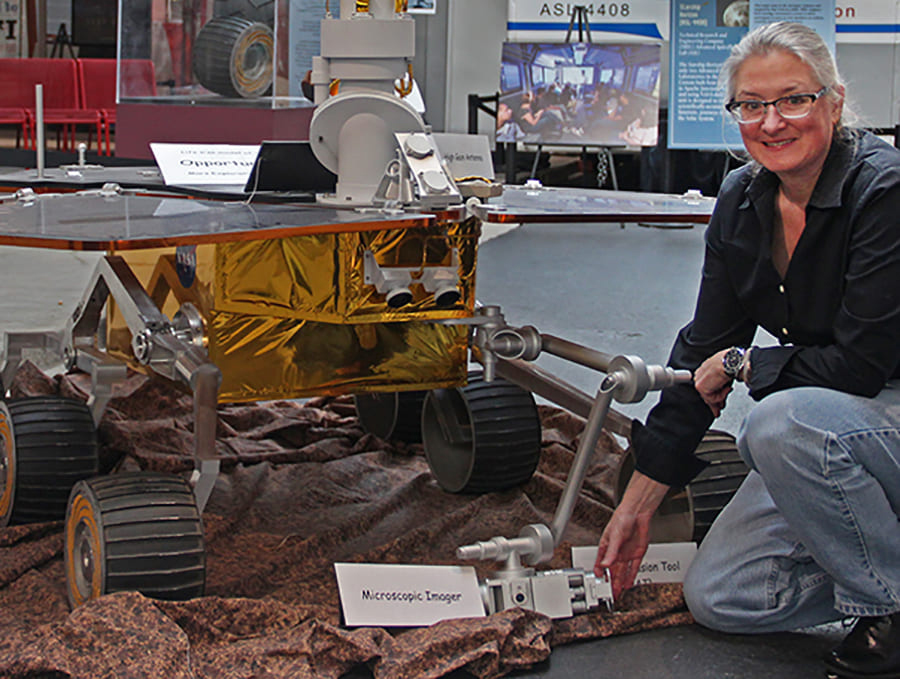 Wendy Calvin has been working on Mars for 12 years. She is the Science Operations Working Group Chair on a team that has been exploring the Martian landscape with the rover Opportunity.

"We are exploring an area called Marathon Valley now, looking for clay minerals that have been identified in images from the MRO (Mars Reconnaissance Orbiter)," Calvin, a geophysics professor at the University of Nevada, Reno, said. "Opportunity is on the rim of the Endeavour crater up on the steep slopes of Knudsen Ridge."

A NASA Jet Propulsion Laboratory mission, the rover Opportunity bounce-landed on Mars in January 2004 along with its twin, Spirit. The two vehicles were expected, worst case scenario, to last about three months and go about 600 yards. As of Feb. 23, 2016, Opportunity has traveled 26.5 miles. Spirit stopped in 2010 after traveling 4.8 miles.

The 12-year anniversary for Opportunity slipped quietly by this January, and Calvin's team of about 60 scientists and engineers raised a glass to toast the longevity of the mission at their regular annual team meeting following the anniversary.

"I work with the team about three or four days a month, much less than, say, five years ago when I was leading operations about a week each month," she said.

Calvin's work with the two instruments are right up her alley. As an expert in mineral spectroscopy, she uses CRISM, a spectrometer that observes visible and infrared light, to identify minerals on the Martian surface. MARCI, Mars Color Imager, helps the team plan their missions by producing global weather maps to record changes in the Mars climate on a daily to yearly basis and is able to track dust storms.

The Martian dust storms were expected to clog the rovers and coat the solar arrays that power the vehicles, limiting their usefulness. However, while parked on small slopes, light winds carry dust off the solar arrays, and while many components are not functioning, the rover is mobile and two cameras and other instruments continue to feed information to the scientists.

"Initially, I proposed to work with the miniature thermal emission spectrometer, an instrument whose mirrors ultimately got coated in dust and that we haven't used in quite a while," Calvin said. "The cameras, a particle x-ray spectrometer and the rock abrasion tool are still working."

Calvin has led the daily tactical flight operations for the rover, guiding the science team to a consensus on what the rover should do and then moving the plan through the process of generating the commands that go to the rover. She has conducted scientific investigations as well as linked projects between the rovers and the orbiter specializing in surface mineral alteration.

"It's an incredible experience - it's been exciting to see each day what challenges and accomplishments are in store," she said. "It's an honor to be part of a project that is unlocking the history of water on Mars."

Calvin was appointed chair of the Department of Geological Sciences in the University's College of Science last semester. She has been the director of the University's Great Basin Center for Geothermal Energy and was instrumental in instituting and guiding to success the National Geothermal Academy - a program designed for industry and academics to learn the latest techniques and information about the science and technology of geothermal exploration and development.