Tilting the Basin: University artists partake in a rising culture of art

Artists from northern and southern Nevada participate in an art show through Oct. 23 at the Nevada Museum of Art

Tilting the Basin: University artists partake in a rising culture of art

Artists from northern and southern Nevada participate in an art show through Oct. 23 at the Nevada Museum of Art

The rising tide of culture in Nevada has brought together artists from the northern and southern regions of the Silver State to display their talent and hard work in an exhibition titled "Tilting the Basin." The show opened Aug. 5 and runs until Oct. 23 at the Nevada Museum of Art in downtown Reno, and will move to Las Vegas in spring 2017.

According to the "Tilting the Basin" fact sheet, the exhibition is named after the water that once filled the Great Basin in Nevada. Although the ancient bodies of water are long gone, a tide of culture is now arising in Nevada. The tilt of the basin will allow the tide to be examined for the quantity and quality of its artistic and cultural contents.

"Tilting the Basin" is attempting to bridge the divide between Northern and Southern Nevada by bringing together the artwork in one place. Many of the participants in the show are University of Nevada, Reno alumni of the School of the Arts' Department of Art, who are given the opportunity for their name and artwork to become recognized. These alumni include Nick Larsen, Chris Bauder, Nate Clark, Jen Graham, Jeffrey Erickson, and Ahren Hertel. Other participants in the show include University professors, faculty and other artists from around Nevada.

The show will display approximately 90 paintings, displays, objects, sculpture, and many other forms of art created by artists throughout Nevada. The geography of Nevada is an inspiration to many of these artists, as it provides a feeling of freedom brought on by the large open spaces the state offers. Although all of the pieces differ, they all share the same western culture with themes such as the body, food, space, repetition, nature and many more.

One talented participant in the show is Jeffrey Erickson, assistant director of the John Ben Snow Sculpture Center and assistant chair of the Department of Art at the University. He has previously worked at the Nevada Museum of Art as the Chief Preparator and exhibit designer, but his passion for creating art brought him to the University where he now teaches sculpture courses.

As a born-and-raised Nevadan, Erickson has developed an interest in the space between Lovelock and Fallon, also known as the 40-mile desert, because of the migration of immigrants and pioneers to the West. 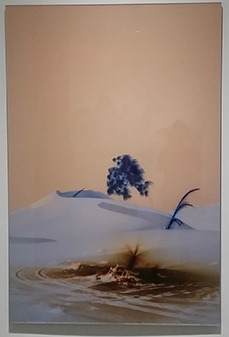 "I find that the difficulty and the struggle that happened in that space was pretty profound," Erickson said. "When you see it now there is nothing there, but I still think that something remains - there is a phantom quality about it."

Erickson's piece references a photograph that western photographer, Timothy O'Sullivan took in 1867 of a wagon train at Sand Mountain, which Erickson assumes is possibly the first photograph of the mountain just outside of Fallon.

Erickson photographed an ATV carcass that he had stripped and sculpted at Sand Mountain. He posed and placed the ATV in almost the exact area where O'Sullivan's wagon train was photographed in the 1860s. Erickson planned the photo at night to coincide with fireworks, and later did a color inversion to rid the darkness of the night sky. He printed the photo on a piece of metal and then sandwiched the metal between two pieces of acrylic. His goal was to create a piece that was more sculptural than just a photograph with a frame.

"I believe "Tilting the Basin" is taking the geography of Nevada and then adding a conceptual shift to it," Erickson said. "Hopefully that is what my work does, where you take what is there, then add another several layers of concept, context and meaning to make it resonate on multiple levels, resulting in a tilt or twist of geography."

To experience Erickson's piece and other artworks on display, visit the Nevada Museum of Art before Oct. 23. Profiles on each of the artists, including the University's professors and faculty members, Megan Berner, Rebekah Bogard, Joseph DeLappe, Ahren Hertel and Erickson are available to read in the Tilting the Basin fact sheet, and general information on the show is available on the Nevada Museum of Art website.