Like a diamond in the rough, a small cut of beef that meat cutters throw in with ground meat is now being looked at as a high-end delicacy by researchers at the University of Nevada, Reno.

The small, quarter-moon-shaped slice of beef that has a taste and tenderness that outclasses any other cut except filet mignon made its debut this week for media, meat industry representatives and University officials in a private tasting.

Assistant professor of meat science and food safety Amilton de Mello, who has redeveloped the use for the piece of meat, talked about the science behind the cut, its ease of trimming and profitability for the meat processing industry, as well as the potential for restaurants to offer it as a premier menu item. The Bonanza Cut is juicy, extremely tender and very marbled. The petite slice of beef is ideal for grilling and practically melts in your mouth.

"Chefs and restaurants will love this cut, it can be portioned for many sizes of servings," de Mello, from the College of Agriculture, Biotechnology and Natural Resources and the University of Nevada Cooperative Extension, said. "And for meat producers, it offers a higher price point and more profits by taking this cut in a new direction." 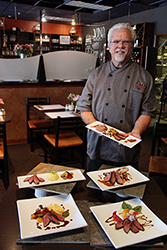 "It can be served in a variety of ways, grilling on a flat top, grill or even a cast iron skillet," Coonrad said. "A light marinade will complement the innate flavor of the meat. The first bite gives a blast of flavor and then the pure flavor of the beef comes through."

Coonrad, with 20 years of experience as a chef, trained at both the California Culinary Academy in San Francisco and the Culinary Institute of America at Greystone. He created two themes for the Bonanza Cut: Mediterranean and Southwest, with six recipes. One of the recipes, The Southwest Bonanza Cut, El Paso style, features a tangy southwest marinade for the cuts served with roasted corn and black bean salad with baked potato wedges and a jalapeno aioli garnish.

"It melts in your mouth, the marinade was nice and light, not overshadowing the flavor of the Bonanza Cut," Stan Omaye, chair of the University's Department of Agriculture, Nutrition and Veterinary Science, said at the tasting.

"No matter which style you prepare this, you don't want to marinate this cut for long, only 30 minutes," Coonrad said. "The meat is tasty all on its own, and these recipes make it great for either lunches or dinners. It's easy to portion and will have a good price point for restaurants."

Consumers won't find the Bonanza Cut in the meat department or restaurants yet. It will be up to the meat producers, such as JBS who funded de Mello's research, to make the cut available.

The quest for a new cut of meat the industry will love
De Mello started developing this new cut in 2014 while working for the beef industry. With support from JBS, a world leader in processing of beef products, he conducted research on the cut at the University beginning in 2015 and found it compared extremely well against other cuts of beef.

The objective of the experiment was to evaluate tenderness and cooking yields of the m. infraspinatus caudal tip (the very far end of the flat iron steak) and verify the opportunity of exploring this cut as an added-value product. Research found that the Bonanza Cut has superior marbling and higher fat content compared to other meat cuts, including the flat iron steak. 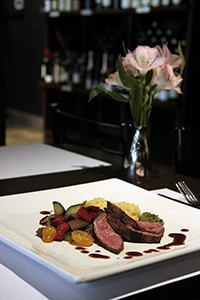 "Meat processors will like this specialty cut for a number of reasons, one because it's very easy to trim," de Mello said. "When you separate the chuck and the ribs, the Flat Iron steak goes one way - with the Chuck - and the relatively small end stays with the rib side; this is the Bonanza Cut.

"The industry will also like it because instead of selling it for $1 a pound as lower quality meat, they can showcase it for what it is, a premium cut worth more like $5 a pound."

The small cut yields two pieces per beef carcass that combined weigh about a half of a pound. By angling the cut when breaking the ribs, meat cutters will gain more volume for the Bonanza Cut.

"This small volume makes this cut even more special based on its high quality and low availability," de Mello said. "Due to its eating characteristics and unique texture, The Bonanza Cut is a new alternative to replace traditional beef cuts in many different recipes."

Also at the Bonanza Cut unveiling and tasting was Chris Calkins, Professor of Animal Science at the University of Nebraska, Lincoln, who was part of the team that developed the flat iron steak from a project funded by the Beef Checkoff.

"The Bonanza cut is rich and succulent - a tender, savory piece of beef that should prove popular with consumers," he said. "In an industry with a small profit margin, any opportunity to increase value is appreciated. Upgrading this meat from a ground beef/trim price to steak-quality price should return more dollars to the industry. I anticipate a positive reception for the Bonanza Cut, especially from countries that recognize U.S. beef for its quality and flavor."

The meat science program at the University was invigorated with the hiring of de Mello in December 2015 and the opening of his new meat research lab. In addition to his research, he teaches about the meat industry, food safety and quality systems and advanced meat science in the University's Department of Agriculture, Nutrition, and Veterinary Sciences.

"We are creating a very broad meat science program," he said. "We have meat-quality projects and experiments involving animal welfare and food safety. We offer students research and teaching experiences by using our main meat lab and three collaborating ones here on campus. Students can go to our Nevada Agriculture Experiment Station in the morning, follow animal harvest activities in our USDA-inspected meat processing plant, learn about animal welfare practices and spend the afternoon in the lab developing research."

"Amilton brings an abundance of energy and expertise to the program," Bill Payne, dean of the College of Agriculture, Biotechnology and Natural Resources, said. "He's one of 12 new faculty in the College who will allow us to better connect with and support agricultural producers in ways that have not been possible for many years."