A bridge that bends in an strong earthquake and not only remains standing, but remains usable is making its debut in its first real-world application as part of a new exit bridge ramp on a busy downtown Seattle highway.

"We've tested new materials, memory retaining metal rods and flexible concrete composites, in a number of bridge model studies in our large-scale shake table lab, it's gratifying to see the new technology applied for the first time in an important setting in a seismically active area with heavy traffic loads," Saiid Saiidi, civil engineering professor and researcher at the University of Nevada, Reno, said. "Using these materials substantially reduces damage and allows the bridge to remain open even after a strong earthquake."

Saiidi, who pioneered this technology, has built and destroyed, in the lab, several large-scale 200-ton bridges, single bridge columns and concrete abutments using various combinations of innovative materials, replacements for the standard steel rebar and concrete materials and design in his quest for a safer, more resilient infrastructure.

"We have solved the problem of survivability, we can keep a bridge usable after a strong earthquake," Saiidi said. "With these techniques and materials, we will usher in a new era of super earthquake-resilient structures." 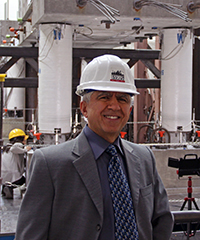 The University partnered with the Washington Department of Transportation and the Federal Highway Administration to implement this new technology on their massive Alaska Way Viaduct Replacement Program, the centerpiece of which is a two-mile long tunnel, but includes 31 separate projects that began in 2007 along the State Route 99 corridor through downtown Seattle.

"This is potentially a giant leap forward," Tom Baker, bridge and structures engineer for the Washington State Department of Transportation, said. "We design for no-collapse, but in the future, we could be designing for no-damage and be able to keep bridges open to emergency vehicles, commerce and the public after a strong quake."

Modern bridges are designed to not collapse during an earthquake, and this new technology takes that design a step further. In the earthquake lab tests, bridge columns built using memory-retaining nickel/titanium rods and a flexible concrete composite returned to their original shape after an earthquake as strong as a magnitude 7.5.

"The tests we've conducted on 4-span bridges leading to this point aren't possible anywhere else in the world than our large-scale structures and earthquake engineering lab," Saiidi said. "We've had great support along the way from many state highway departments and funding agencies like the National Science Foundation, the Federal Highway Administration and the U.S. Department of Transportation. Washington DOT recognized the potential of this technology and understands the need to keep infrastructure operating following a large earthquake."

In an experiment in 2015, featured in a YouTube video, one of Saiidi's bridge's moved more than six inches off center at the base and returned to its original position, as designed, in an upright and stable position. Using the computer-controlled hydraulics, the earthquake engineering lab can increase the intensity of the recorded earthquake. Saiidi turned the dial up to 250 percent of the design parameters and still had excellent results.

"It had an incredible 9 percent drift with little damage," Saiidi said.

The Seattle off-ramp with the innovative columns is currently under construction and scheduled for completion in spring 2017. After the new SR 99 tunnel opens, this ramp, just south of the tunnel entrance, will take northbound drivers from SR 99 to Seattle's SODO neighborhood.

A new WSDOT video[youtu.be] describes how this innovative technology works.

The University of Nevada Reno's Earthquake Engineering Laboratory combined with the Large-Scale Structures Laboratory comprise the biggest, most versatile large-scale structures, earthquake/seismic engineering facility in the United States, according to National Institute of Standards and Technology.