Following its successful stay at the Terry Lee Wells Nevada Discovery Museum in downtown Reno, Monster Fish: In Search of the Last River Giants opened to the public at the Tennessee Aquarium in Chattanooga Oct. 1. The traveling exhibition by National Geographic features the work of Dr. Zeb Hogan, a researcher at the University of Nevada, Reno since 2006, a National Geographic Explorer and host of the NatGeo WILD television series Monster Fish. The University's College of Science is the Presenting Sponsor of the exhibition as it continues its travels.

Hogan visits exotic places around the globe in search of the earth's largest freshwater fish, and the exhibition engages visitors in his decade-long quest to study and protect these fascinating and increasingly rare creatures. 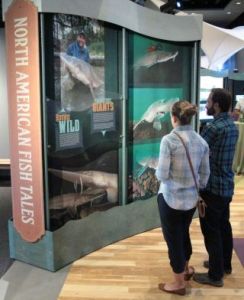 "These giant fish are real life Loch Ness monsters, a diverse assemblage of amazing and poorly understood fish," said Hogan. "Many of these fish are endangered, and so it's become a race against the clock to study and protect these gargantuan aquatic animals before they disappear forever."

The exhibition's Reno run opened Nov. 25, 2015. The exhibition close, initially scheduled for April 24, was extended to September 5, 2016. During its stay, visitors to The Discovery were up more than 30 percent, and an extensive education outreach effort brought thousands of northern Nevada school children and their teachers to the exhibition.

In early 2015, Hogan collaborated with Sudeep Chandra, associate professor of biology in the College of Science and director of the University's Global Water Center, and Dave Crowther, professor of science education in the College of Education and executive director of the University's Raggio Research Center for STEM, to develop the Monster Fish Educator's Guide. Geared to grades 4 through 8, connected to Next Generation Science Standards and sponsored by the University's College of Science, the guide outlines classroom activities for before and after a tour of the exhibition. The free guide was introduced for the inaugural showing of the Monster Fish exhibition at the National Geographic Museum in Washington, D.C. in 2015. The guide was made available and widely used in northern Nevada, and it is now offered to educators through the Tennessee Aquarium.

"A moment of discovery or engagement with science can set a young student on the path toward a college degree and a career in science," Jeff Thompson, dean of the College of Science, said. "Dr. Hogan's work is intriguing to all ages, but especially to young people. He has generously contributed time to school visits, museum activities and public presentations, and in this science-ambassador role he continues to inspire many to explore science."

"Together with the River Giants exhibit in River Journey, and the aquarium's work to save animals such as Lake Sturgeon, visitors will have a chance to experience and learn about these fish in a totally immersive way," said Hogan.

Monster Fish continues at the Tennessee Aquarium through March 1.