President Barack Obama talked about "riding off into the sunset" soon with the man behind the annual Lake Tahoe Environmental Summit, Nevada Sen. Harry Reid.

Both Obama and Reid will be leaving office following the November elections. Yet, if there was a theme to Wednesday's 20th Lake Tahoe Summit - which was highlighted by Obama's keynote address, before a standing-room-only crowd of about 9,000 in the sun-splashed Harvey's Outdoor Arena at Stateline - it was one of celebration, mixed with the realization that there is still work to be done at Tahoe.

"Lake Tahoe is better today than when we started two decades ago," said Reid, whose invitation to President Bill Clinton and Vice President Al Gore led to the first Tahoe Summit and brought unprecedented attention the Tahoe's declining clarity in 1997. Since then, about $2 billion in federal, state, local, individual and private funding has reversed Tahoe's ecological decline. "We've had the best scientific research in the world here," Reid added, "the best minds at the universities in Nevada and California are working on this 12 months of the year. ... Today's Lake Tahoe Summit is a celebration of progress, of unity, though there is much more work to be done." 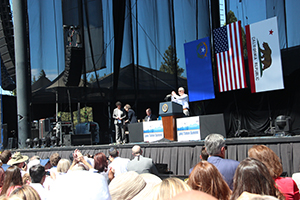 Obama, who was visiting Lake Tahoe for the first time, cast the effort to save Lake Tahoe against the much broader backdrop of the issues associated with global climate change. Obama said global climate change is being felt at Lake Tahoe through rapidly warming waters and air temperatures that will lead to new challenges in the management of the lake and the science and innovation developed to save it.

"The challenges of conservation and combating climate change," Obama said, "are interconnected."

Later, he added: "So this isn't just a challenge. This is an opportunity. We share a sacred connection with those who follow us. ... The important changes are the changes made by us ... Our healing of Lake Tahoe proves we can pass along this incredible bounty to future generations."

Obama praised Reid for the central role the 30-year Nevada senator has played in defending the environment and in ensuring that Lake Tahoe remained a top priority for the congressional delegations of Nevada and California, as well as the governors and state legislatures of those two states.

"As he prepares to ride into the sunset, this 20th anniversary Summit proves that the light Harry lit burns brightly as ever," Obama said.

Obama also joked that he's learned with Reid, who is known to cut off phone conversations in mid-sentence with individuals ranging from the media to Obama himself, to not take such occurrences personally.

"He's not mad at you," Obama said, smiling broadly. "He just doesn't have much patience for small talk." Then Obama grew more serious: "I could not be prouder to work alongside with the Democratic Leader of the Senate."

"It was his leadership that made the first Summit possible, and it was Harry Reid who brought President Clinton to Lake Tahoe to really dramatize it," Feinstein said.

California Sen. Barbara Boxer, who like Reid will be retiring after the November elections, reminded the audience that passage of the Lake Tahoe Restoration Bill - which would provide $415 million over the next 10 years in additional Tahoe funding - remains an important priority for both delegations.

"It's working its way to the Senate floor and I hope you keep the pressure on," Boxer said. "If we get that done, we're on our way."

Obama showed a mix of the type of soaring language that has made him the most gifted political orator of his generation, and, as well, provided needed humor at what seemed to be just the right moments.

When he noted it was his first time at Tahoe, the audience sounded a loud, disapproving groan.

"It's not like I didn't want to come," he said, drawing cheers from the crowd. "Now that I've been here, I'm going to come back. ... This place is spectacular."

It was a sentiment that was shared well before the President hit the stage. At nearby educational booths, University researchers were sharing their latest discoveries, technologies and plans to help combat Tahoe's biggest challenges, from invasive species to wildland fire.

Graham Kent, director of the Nevada Seismological Laboratory, displayed maps of the series of high-definition cameras that are perched on Tahoe's mountaintops and are part of the lab's statewide earthquake monitoring network. The 360-degree cameras can scan hundreds of square miles of the Tahoe and nearby forests for signs of wildfire. Kent and his team have partnered with firefighting agencies that use the system to keep a watchful eye on the forests in and around the Tahoe Basin. The cameras had actually spotted a small 1 1/2-acre fire near Pioneer Trail on Tahoe's South Shore overnight. The camera's capabilities have enabled firefighters to mount rapid response based on early discovery and/or actionable intelligence.

A few feet away from Kent, Sudeep Chandra, associate professor of biology in the College of Science and one of the prime forces behind one of the University's newest research and policy initiatives, the Global Water Center, stood next to a miniature, unmanned autonomous boat developed in concert with the University's Nevada Advanced Autonomous Systems Innovation Center. The boat will help researchers broaden even further their water health studies at Lake Tahoe, sending scientific data to on-shore researchers.

Chandra, ever the teacher, had the attention of three young boys, who were fascinated by the colorful orange boat and information that Chandra's good friend and fellow University researcher Zeb Hogan had provided about some of Tahoe's fish, an offshoot of Hogan's work in saving the world's largest "Monster Fish."

Chandra asked one of the boys what their favorite fish was. The boy was too enamored with the information on fish and Tahoe's waters to utter a reply. He looked a little awe-struck by the boat, the fish, and the moment.

Chandra smiled and shrugged his shoulders. It was a magical Tahoe moment, inspiring in how, yet again, Tahoe had managed to capture yet another imagination.

Just as the President of the United States would say a little while later, the beauty of Tahoe and the hard work to save it, though planted firmly in the present, was actually work that, if done right, would benefit future generations in ways that were both magical and inspiring.

"We do it," Obama said of the work of the past 20 years and the work that is still to come, "because places like this nurture and restore the soul ... and we want to preserve treasures like this for our kids, too."