Pick up a book for someone special this holiday season

Add books written by University professors, students and faculty or printed by the University Press to your wish list this year

Pick up a book for someone special this holiday season

Add books written by University professors, students and faculty or printed by the University Press to your wish list this year

Give the gift of imagination and knowledge this holiday season and choose from any of these books written by University of Nevada, Reno professors, alumni and faculty. Also on the list are books published by the University of Nevada Press. Ranging from fiction to nonfiction to environmental to autobiographical, there is sure to be a book perfect for someone on your shopping list.

"Worthy" by Denice Turner was selected as an award-winner in the autobiography/memoirs category of the 2015 USA Best Book Award.
"Worthy" is a memoir of loss and the search for acceptance. Raised in a Mormon household, Denice Turner strives to find her place in the church, longing to be worthy of her mother's love. When her mother dies in a suspicious house fire, Turner is forced to face the problems with the stories she inherited. Contemplating the price of worthiness, Turner grapples with the mystery of her mother's death, seeking to understand her mother's battle with chronic pain.

"Worthy" can be purchased on Amazon 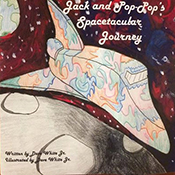 "Jack and Pop-Pop's Spacetacular Journey" inspires children to dream big. Born with cerebral palsy in 1990, David White faced a lot of challenges during childhood, including executive processing disorder and ADHD. Despite the challenges that White has faced, he has already written a sequel to "Jack and Pop-Pop's Spacetacular Journey" and is currently on a book tour.

"Jack and Pop-Pop's Spacetacular Journey" can be purchased on etsy.

The Country I Call Home: Stories of Growing Up a Citizen in Every Way but One

By Emma Sepulveda professor in the world languages and literature department and director of the Latino Research Center and Ivon Padilla- Rodriguez, University alumna

"The Country I Call Home: Stories of Growing Up a Citizen in Every Way but One" showcases 41 first-person essays of undocumented youth known as DREAMers, tied together by the chapters of two immigrants' rights advocates, Emma Sepúlveda Pulvirenti and Ivón Padilla-Rodríguez. Their voices coalesce in "The Country I Call Home" to form an inspiring series of narratives about the lives of undocumented and immigrant students living in the United States who are from all around the world.

To purchase a copy of "The Country I Call Home" contact the Latino Research Center at latinocenter@unr.edu or call 775-784-4010.

Do You Hear my Accent When I Write? The Voice of a Latina Immigrant

This is a collection of columns about Latino issues that Sepulveda has written for the Reno Gazette-Journal, Reno's daily newspaper, throughout the past 10 years. She often receives letters and e-mails in response to her column and she has included some of those responses in this book. She said the feedback has created a dialogue between her and her readers and that she invites everybody to openly discuss issues that affect Latinos and the community at large. Sepulveda also speaks of her views on a wide rage of other topics. The entirety of the proceeds from the sales of "Do You Hear My Accent When I Write: The Voice of A Latina Immigrant" are being donated to the Latino Research Center to promote its mission.

To purchase "Do You Hear my Accent When I Write? The Voice of a Latina Immigrant," contact the Latino Research Center at latinocenter@unr.edu or call 775-784-4010.

By Justin Gifford, associate professor in Department of English at the University of Nevada, Reno

"Street Poison" is a biography of Robert Beck, known as Iceberg Slim, one of America's most infamous pimps of the 1940s and 1950s. Slim refashioned himself as the first and still the greatest of "street lit" masters, whose vivid books have made him an icon to such rappers as Ice-T, Jay-Z, and Snoop Dogg and a presiding spirit of "blaxploitation" culture.

"Street Poison" can be purchased on Amazon.

That Old Bilbao Moon: The Passion and Resurrection of a City

"That Old Bilbao Moon" can be purchased at the Center for Basque Studies.

Mythology and Ideology of the Basque Language

This small book is an academic and yet accessible account of how different theories about the origin of the Basque language - a language isolate with no known genealogical relationship to any other language and therefore one of the great linguistic mysteries for scholars - developed between Medieval times and the 20th century. Moreover, Tovar extends his discussion to encompass a broader understanding of the pre-Roman linguistic history of the Iberian Peninsula as a whole, and along the way he skillfully demonstrates how the social, political and cultural context of each era influenced these contrasting (and often conflicting) theories.

"Mythology and Ideology of the Basque Language" can be purchased at the Center for Basque Studies.

Beyond Guernica and the Guggenheim: Art and Politics from a Comparative Perspective

This book brings together experts from different fields of study, including sociology, anthropology, art history and art criticism, to share their research and direct experience on the topic of art and politics. How art and politics relate with each other can be studied from numerous perspectives and standpoints. A main focus is on the politics of art in the Basque Country, complemented by case studies and reflections from other parts of the world, both in the past and today. This book is unique by gathering a rich variety of different viewpoints and experiences, with artists, curators, art historians, sociologists and anthropologists talking to each other with sometimes quite different epistemological bases and methodological approaches.

"Beyond Guernica and the Guggenheim: Art and Politics from a Comparative Perspective" can be found on Amazon.

The Main Event: Boxing in Nevada from the Mining Camps to the Las Vegas Strip

" The Main Event" is an in-depth look at the rich history of boxing in Nevada. The book is the result of years of research and expertise as one of the country's best sports historians. Davies has written and edited 15 books and was inducted into the Nevada Writers Hall of Fame in 2013.

"The Main Event: Boxing in Nevada from the Mining Camps to the Las Vegas Strip" can be found at the Nevada Wolf Shop.

This collection of essays examines the relationship between environmental injustice and the exploitation of working-class people. Twelve scholars from the fields of environmental humanities and the humanistic social sciences explore connections between the current and unprecedented rise of environmental degradation, economic inequality, and widespread social injustice in the United States and Canada.

"Working on Earth: Class and Environmental Justice" can be purchased on Amazon.

In northwestern Nevada, the waters of the Truckee, Carson, and Walker river systems are fought over by competing interests: agriculture, industry, Native Americans and newer residents, and environmentalists. Much of the conflict was caused by the Newlands Project, completed in 1915, the earliest federal water reclamation scheme. Diverting these waters destroyed vital wetlands, polluted groundwater, nearly annihilated the cui-ui and the Lahontan cutthroat trout, and threatened the existence of Pyramid Lake. "Water Politics in Northern Nevada" examines the Newlands Project, its unintended consequences, and decades of litigation over the abatement of these problems and fair allocation of water.

"Water Politics in Northern Nevada: A Century of Struggle, Second Edition" can be purchased on Amazon.

This completely revised and updated edition of "A Short History of Reno" provides an entertaining and informative account of Reno's remarkably colorful history. Richard Moreno discusses Reno's efforts, from its early beginnings in the 1850s to the present day, to reinvent itself as a recreation, entertainment, education, and technology hub. Moreno looks at the gamblers, casino builders, and performers who helped create the world-famous gaming industry, and he considers the celebrities who came to end unhappy marriages, back when Reno was "the divorce capital of the world." Moreno brings the city's history up-to-date with coverage of the businesspeople and civic leaders who helped make Reno an attraction that still lures millions of visitors each year. Today's travelers and residents explore Reno's flamboyant heart and scenic wonders, topics the author examines in an accessible and lively fashion.

"A Short History of Reno," Second Edition can be found on Amazon.

By Xabier Irujo, faculty at the Center for Basque Studies

On April 26, 1937, a massive aerial attack by German and Italian forces reduced the Basque city of Gernika to rubble and left more than sixteen hundred people dead. Although the assault was initiated as part of a terror bombing campaign by Francoists against Basque Republican forces during the Spanish Civil War, its main intent was to test the effectiveness of the rising German Luftwaffe's new equipment and strategies.

"Gernika, 1937: The Market Day Massacre" can be purchased on Amazon.

In addition to these twelve books, the Nevada Writers Hall of Fame honored 2015 Inductee Ellen Hopkins and 2015 Silver Pen Award recipients Mark Maynard and Laura McBride. These three writers were selected based on their body of work, recognition and a strong connection to Nevada through the themes of their writing of residence in the state.

Hopkins, a Carson City native, is a New York Times best-selling author of 11 young adult novels, including the Crank trilogy and three novels for adult readers. In addition to writing, Hopkins founded Ventana Sierra, a non-profit helping at-risk youth with housing and other necessary resources, including educational support and career guidance.

Maynard, Silver Pen recipient and Tahoe native has been a strong part of the Northern Nevada writing community for many years. Maynard taught Composition, Fiction and Creative Writing at Truckee Meadows Community College, the University of Nevada, Reno, and Sierra Nevada College. His short fiction has appeared in numerous magazines and he's been featured as part of Sierra Nevada College's Writers in the Woods Series and as part of the Squaw Valley Community of Writers Alumni Reading Series. Currently Maynard is the program coordinator for the Nevada Humanities Reno Literary Crawl, and the co-founder of the Sierra Literary Alliance.

Next Silver Pen recipient is Las Vegas native, McBride. McBride's debut novel, We Are Called to Rise, has skyrocketed since being published, ending up on seven "Community Reads" lists, including Nevada's, as well as being a lead fiction title for Simon & Schuster in 2014 and a #1 IndieNext pick. Currently, McBride is a tenured professor of English at the College of Southern Nevada, where she has been actively involved in all aspects of teaching and college life.

Also, in the Boston Globe article "The best books of 2015," Professor Jennifer Ring from the political science department was recognized for her novel "A Game of their Own: Voices of Contemporary Women in Baseball."