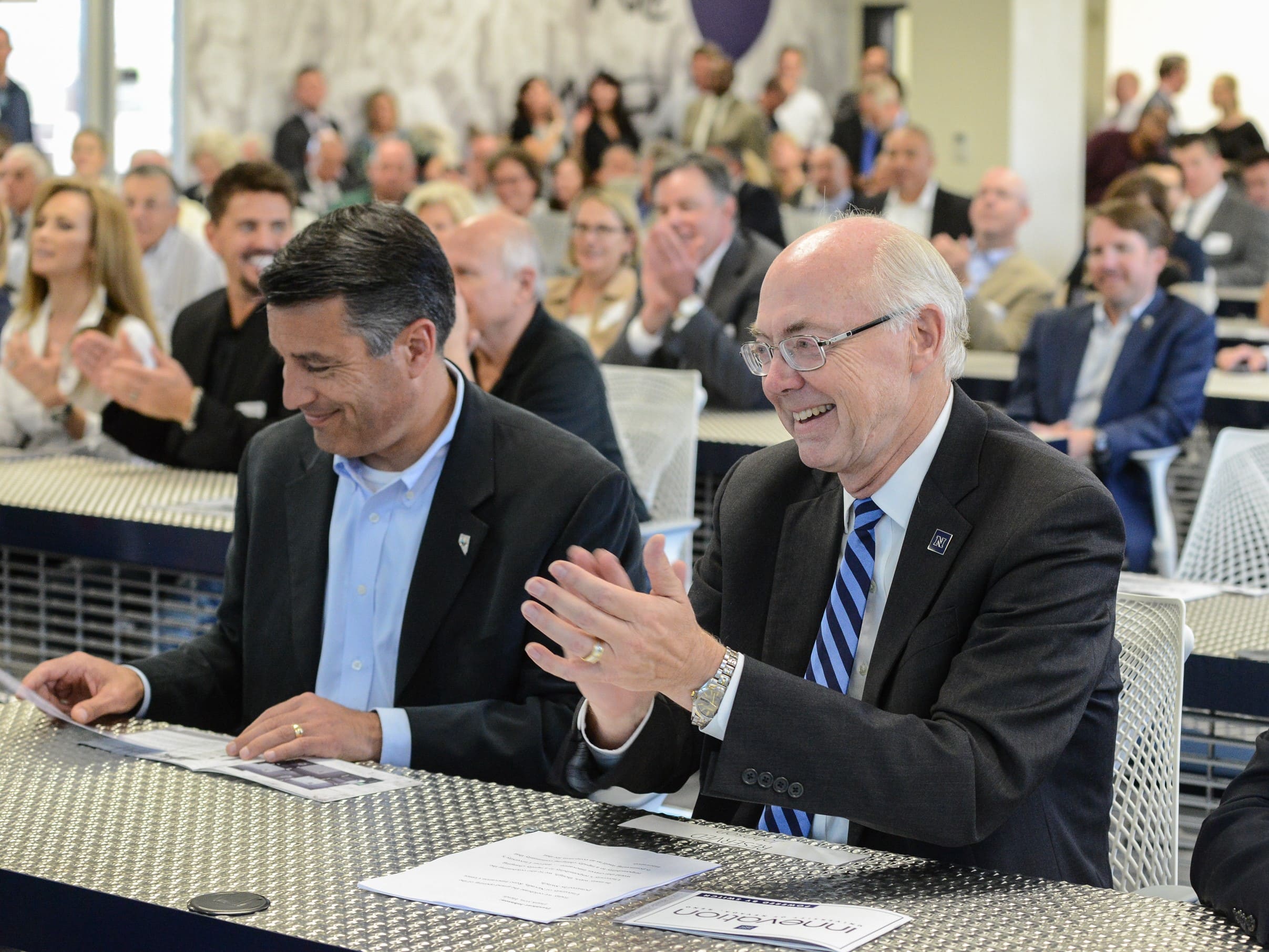 A twist on the traditional ribbon-cutting ceremony marked the Sept. 22 opening of the University of Nevada, Reno Innevation Center, Powered by Switch, in downtown Reno. As a packed room of guests that included Nevada Governor Brian Sandoval and Reno Mayor Hillary Schieve looked on, the laser cutter from the facility's new makerspace cut out an intricate image of The Innevation Center logo.

What is The Innevation Center? Mridul Gautam, University vice president for research and innovation, describes it as "a collaborative space that will stimulate ideation, creation, incubation, mentoring and acceleration of start-ups and new ventures. It is an important addition to the vibrant, knowledge-based ecosystem taking hold in Nevada."

Located at 450 Sinclair Street at the edge of Reno's emerging Midtown district, the exterior of the four-story facility is identified with a bold, large-scale University Block "N" logo. The Innevation Center is approximately 1.25 miles from the University's main campus and three blocks from Reno's City Hall.

Switch, the recognized world leader in data-center development and mission-critical operations, generously provided a half-million-dollars toward the interior build-out of the University of Nevada, Reno Innevation Center, Powered by Switch. It is similar in style to The Innevation Center in Las Vegas, created and built by Switch founder and CEO Rob Roy. The two centers - named to take the "no" out of innovation - create a new foundation for economic collaboration statewide.

The University acquired the 25,000-square-foot building from the City of Reno through a lease-to-purchase agreement in early 2014, and city officials have continued to lend support to the planning and development of the project.

"We appreciate our partnership with the City of Reno," Heidi Gansert, University executive director of external affairs, said. "We are excited to serve as a catalyst for the continued resurgence of Reno's downtown and midtown districts and to see our community increasingly embrace what comes with being a University Town."

At The Innevation Center

The Innevation Center will bring the University community together with entrepreneurs, investors and commercialization experts. It will offer co-working, conference and meeting space, and a makerspace with resources and equipment to support development of prototypes and minimize the design-cycle time. Mentoring by industry executives and experienced entrepreneurs, plus the opportunity to make connections with external networks and access to capital, will be extended through The Innevation Center.

Reno Mayor Hillary Schieve: "We're not just saying it, we're doing it. We are becoming a University Town now more than ever. I am thrilled to see Switch and the University join together to further solidify downtown Reno as an emerging, energetic center."

Rick Trachok, chairman, Nevada System of Higher Education Board of Regents: "From the moment you walk into this building, you realize that it is a collaborative environment. It's a place where it's very easy to imagine University students and faculty and researchers coming together with entrepreneurs, investors, and community leaders all working toward the same goal: innovation that will transform how we work together, toward a common purpose; innovation that will transform how we do business, including the incubation and the know-how needed to nurture and create emerging new industries; and, innovation that will lessen physical boundaries and serve as a magnet for further partnership between this city and its university."

Adam Kramer, Switch vice president of strategy: "We have been able to bring the community together (through The Innevation Center in Las Vegas). So when we had the opportunity to partner with the University of Nevada, Reno to create this Innevation Center, we didn't hesitate."

Kristi Overgaard, Switch executive vice president of awesomeness: "Rob Roy started The Innevation Center in Las Vegas to be a collaborative workspace to drive Nevada's new innevation economy. With the addition of The Innevation Center at the University of Nevada, Reno, we will now be able to collaborate statewide. This will make Nevada an example for the rest of the country."

Mridul Gautam, University vice president research and innovation: "Our entire state will be one big innovation hub: this building, the Start-Up Row just up the street, the University campus, the University's Applied Research Facility, the nationally renowned DeLaMare Library, The Ozmen Center for Entrepreneurship, Carson City, Sparks, down to Vegas. Everybody in this region - the University, the city, the Governor, GOED, EDAWN, entrepreneurs, the Sierra Angels and other investors - everybody is pulling the wagon in the same direction. You don't see this very often, if at all."