Public access to significant Native American collection will open by October 2015 in the University of Nevada, Reno Special Collections Department 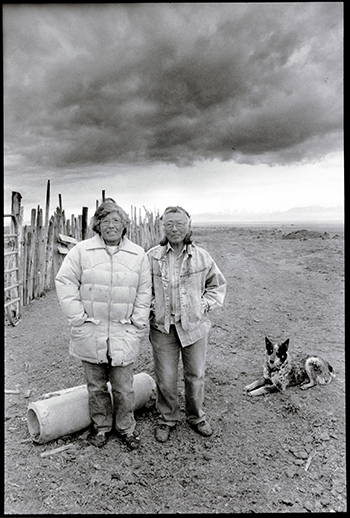 Public access to significant Native American collection will open by October 2015 in the University of Nevada, Reno Special Collections Department

Native American ranchers, activists and sisters, Carrie and Mary Dann, spent most of their lives in a legal battle against the federal government's control of Western Shoshone ancestral lands in northeastern Nevada, an issue eventually decided against them by the U.S. Supreme Court. For nearly 50 years, the materials they collected and those from the nonprofit Western Shoshone Defense Project were only available to members of the Western Shoshone Nation. Carrie, now in her 80s and the only surviving sister - Mary died in 2005 - recently donated this 120-carton collection of documents, ranging from the mid-1960s to 2010, to Special Collections & University Archives in the Mathewson-IGT Knowledge Center at the University of Nevada, Reno.

"Because of the extraordinary scope and historical significance of the records for not only Western Shoshone history but also Native American issues concerning the role the U.S. government assumed over their ancestral lands, the collection will appeal to a wide array of researchers who wish to understand the legal, cultural and environmental issues which face indigenous peoples in the West," Jacquelyn Sundstrand, Knowledge Center manuscripts and archives librarian, said. "This is the first manuscript collection of the Western Shoshone we have in Special Collections."

A grant of more than $77,000 from The National Historical Publications and Records Commission is making it possible to organize, preserve and create an online exhibit and make the documents available to the public. Special Collections was one of only 15 organizations nationwide to receive an NHPRC grant for a project that has national significance.

Another dimension of the project is the woman who is serving as the project archivist, Mary Gibson, a relative of the Dann sisters who spent summers and weekends on the ranch with them throughout her childhood.

"They were my mother's first cousins," Gibson said. "I called them 'my aunts' because in our culture they really were considered aunts. There is no distinction in our extended families; we are all intertwined, and their concern about the Shoshone land is also in my blood."

Gibson said she would listen to her grandmother, who was a mentor to Carrie Dann, talk about the 1863 Treaty of Ruby Valley, a peace and friendship treaty that allowed U.S. citizens safe passage through Western Shoshone territory. It also stated the Shoshone would never have to give up their land. Gibson's grandmother said the Indian voice was not being heard, and the tribe was being ignored by the federal government. This was the basis for the Dann sisters' decades-long journey through the court system as they claimed the Shoshone land was never deeded to the government. The Bureau of Land Management charged the Danns in 1973 with trespassing and grazing their cattle illegally.

"Archiving these papers is so important because there are young people today who won't have the benefit of knowing our elders and what they went through," Gibson said. "The fact that we have the written testimony of who they were and what they stood for will live on. There will always be something to reference when speaking for our culture and our land. It is quite a responsibility to tell this story well, not only for the Western Shoshone but also for other indigenous people who are experiencing similar things in their lands."

"With the addition of this collection, we can expand the information and sources related to the three Great Basin tribes in our area: the Paiutes, Shoshones and the Washoe," Sundstrand said. "We have collections from anthropologists and ethnographers who worked with Paiute and Washoe tribal members and materials from the Pyramid Lake Paiute Tribe, but this is a significant contribution from the Western Shoshone. There is an underlying trust issue here for Native Americans particularly because of their history and treatment, and we are grateful to have been entrusted with the safeguarding of this collection and meeting Carrie's wish that this archive be used for educational purposes."