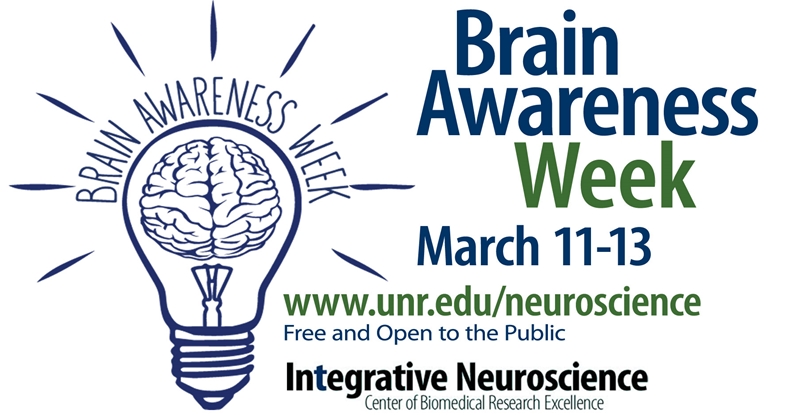 A guest appearance and address by the world's leading visual neuroscientist headlines a series of student- and campus-oriented events during Brain Awareness Week at the University of Nevada, Reno, March 11-13.

Brain Awareness Week is part of a global campaign to increase public awareness of the progress and benefits of brain research. The Integrative Neuroscience Center of Biomedical Research Excellence and the Sierra Nevada Chapter of the Society for Neuroscience are the week's sponsors.

The Integrative Neuroscience Center of Biomedical Research Excellence is funded by a prestigious $10 million competitive grant from the National Institutes of Health designed to build resources and faculty that will allow a university to become a leading force in important areas of biomedical science. Programs awarded the grants have significant expertise already established in the area of study. The University's grant is helping to bring together neuroscience researchers from many units on campus including psychology, biology, biomedical engineering and the School of Medicine who are using diverse approaches to understand the brain and neurological disorders, and provides funding for promising junior researchers in these areas. The Center's Director and Principal Investigator of the NIH award is Michael Webster, a psychology professor at the University.

The week's events will include the inaugural induction of students into the University's newly established chapter of Nu Rho Psi, the National Honor Society for Neuroscience. The University has a rapidly expanding undergraduate degree program in Neuroscience - currently with 300 active students - and membership in the society recognizes academic excellence in the major. The ceremony will be on Wednesday, March 12 at 5:30 p.m. in the Rotunda of the Mathewson-IGT Knowledge Center; Melvyn Goodale, known for his research on the human brain as it performs different kinds of visual tasks, will be on hand as guest speaker and to offer his advice and perspective to students  about to enter careers in the field.

On Thursday, March 13 at 7 p.m. in the Davidson Math and Science Building's Room 110, Goodale will deliver the week's keynote address on "Human echolocation: How the blind use tongue-clicks to navigate the world."  Goodale is known the world over for his neuroimaging and psychosocial research that has had an enormous influence in the life sciences and medicine. His "two-visual-systems proposal" is now part of almost every textbook in vision, cognitive neuroscience, and psychology.  He is a member of the Royal Society, joining the likes of Sir Isaac Newton, Charles Darwin, Albert Einstein and Stephen Hawking.

Goodale is considered a pioneer in the functional organization of the visual pathways in the cerebral cortex and visuomotor control in neurological patients. His research has used functional magnetic resonance imaging to look at the activity in the normal human brain as it performs different kinds of visual tasks. His development of virtual-object technology has helped to better understand visual information used to program and control grasping movements. His book with David Milner, "The Visual Brain in Action" (Oxford University Press), is considered influential, providing compelling arguments that the brain mechanisms underlying your conscious visual experience of the world are separate from those involved in the visual control of skilled actions. Goodale's ideas not only have implications for understanding visual deficits in neurological patients, but also offer new directions for the design of robots and artificial visual systems. His research agenda with its clear and innovative model of visual processing and how each type of vision employs a distinct pathway in the brain is considered a critical link in designing new technology with visual capabilities, as well as refining how we use vision to operate and interact with machines.

Joining Goodale will be Brian Bushway.  Bushway lost his sight at 14, and has learned to use echolocation to "see" and navigate the world, even becoming an accomplished mountain biker. He now trains others to use echolocation through his work with the nonprofit organization World Access for the Blind.  Bushway is known for his highly inspirational and entertaining talks that reveal the amazing and often untapped capacities of the human mind.

In addition to these talks, Brain Awareness Week includes the following events which are all free and open to the campus and community:

Dr. Harris explains his team's project to build a computational model of a brain - starting with the behavior of a single neuron and multiplying it hundreds of thousands of times to simulate brain activity. This model then drives robots who scurry through a maze like a mouse searching for sustenance.

A live performance of approximately eight minutes that explores ways of presenting different forms of data in new and interesting musical and visual contexts. Streams of numbers, or data, are sent into a Max/MSP patch and converted to produce sound. The data is also used to manipulate video of brain MRIs. During performance, all this technology is artfully sculpted to create a stunning aural and visual experience.

Rhetoricians study how people persuade others to share their point of view. Recently, images of brains and brain activity have become intensely involved in persuasion, particularly in public media. Research has shown that simply showing an image of a brain in a media article, no matter how remotely related to the content, causes people to take the article's claims more seriously. The new field of neurorhetorics investigates this phenomenon, as well as the other side of the equation:  What can current neuroscience tell us about the way people argue and persuade each other? This talk gives a brief orientation to recent work both on the rhetoric of neuroscience and the neuroscience of rhetoric.

Nu Rho Psi is the National Honor Society in Neuroscience, founded in 2006 by the Faculty for Undergraduate Neuroscience. World-renown neuroscientist Melvyn Goodale will deliver the keynote address at the University's  inaugural induction ceremony.

Google "Inception" and "neuroscience" and you'll understand why this film has been included  in the Brain Awareness Week lineup. It's a neuroscientist-movie critics' gold mine. Dom Cobb is a skilled thief, the absolute best in the dangerous art of extraction, stealing valuable secrets from deep within the subconscious during the dream state, when the mind is at its most vulnerable. Cobb's rare ability has made him a coveted player in this treacherous new world of corporate espionage, but it has also made him an international fugitive and cost him everything he has ever loved. Now Cobb is being offered a chance at redemption. One last job could give him his life back but only if he can accomplish the impossible-inception. Instead of the perfect heist, Cobb and his team of specialists have to pull off the reverse: their task is not to steal an idea but to plant one. If they succeed, it could be the perfect crime. But no amount of careful planning or expertise can prepare the team for the dangerous enemy that seems to predict their every move. An enemy that only Cobb could have seen coming.

7 p.m.           KEYNOTE
Human echolocation: How the blind use tongue-clicks to navigate the world
Davidson Math and Science 110
NOTE: Continuing Medical Education credit available for this event.

Mel Goodale, (The Brain and Mind Institute) and Brian Bushway
(World Access for the Blind)

"I can hear a building over there"

Everybody has heard about echolocation in bats and dolphins.  These creatures emit bursts of sounds and listen to the echoes that bounce back to detect objects in their environment. What is less well known is that people can echolocate, too. In fact, there are blind people who have learned to make clicks with their mouth and tongue -- and to use to use the returning echoes from those clicks to sense their surroundings.  Some of these people are so adept at echolocation that they can use this skill to go mountain biking, play basketball, or navigate through unfamiliar buildings.  In this talk, the audience will learn about several of these echolocators -- some of whom train other blind people to use this amazing skill. Testing in Goodale's laboratory has revealed that, by listening to the echoes, blind echolocation experts can sense remarkably small differences in the location of potential obstacles.  They can also perceive the size and shape of objects, and even the material properties of those objects -- just by listening to the reflected echoes from mouth clicks. It is clear that echolocation enables blind people to do things that are otherwise thought to be impossible without vision, providing them with a high degree of independence in their daily lives.

Using neuroimaging (functional magnetic resonance imaging or fMRI), Goodale has also shown that the echoes activate brain regions in the blind echolocators that would normally support vision in the sighted brain. In contrast, the brain areas that process auditory information are not particularly interested in these faint echoes.  This work is shedding new light on just how plastic the human brain really is.

This large-scale (8' x 8' x 4') Café Wall optical illusion begs you to ferret out whether the lines are parallel or skewed. Turn the wheel to straighten out your thinking. Test your perception with additional large mounted illusions and learn why things aren't always as they seem.

These events will include morning sessions for school field trips only at 11 a.m., with afternoon sessions open to the public at 4:45 p.m. Admission is free. Location: the Planetarium's newly refurbished exhibit hall.

Perform hands-on activities to understand how different parts of the brain work and how illusions use shortcuts in the brain to trick us.  Hear about recent research into how you can exercise your brain to keep it sharp and performing its best.  See real brains from mice, sheep, and fruit flies to see how our species have shared brain structures and abilities but also key differences.  Touch and hold preserved (but very real) human brains from the University of Nevada School of Medicine to appreciate the amazing wonder that is inside your head.   Dr. Amanda Burnham-Marusich, a post-doctoral scientist at the University of Nevada School of Medicine and two University neuroscience students will lead the class and demonstrations.

The Nevada SBDC and Made in Nevada aim to further support small businesses through the COVID-19 pandemic.

" We believe that providing an option to shop authentic Made in Nevada businesses in an online setting improves consumer safety and keeps our local economy strong.

The University of Nevada, Reno’s Knowledge Center: Before & During the Pandemic

Exploring what the University of Nevada Reno’s campus library looks like now in 2020, during the worldwide COVID-19 pandemic; compared to in 2010, 2 years after its official opening.

Lyon County educator is connecting with the community virtually