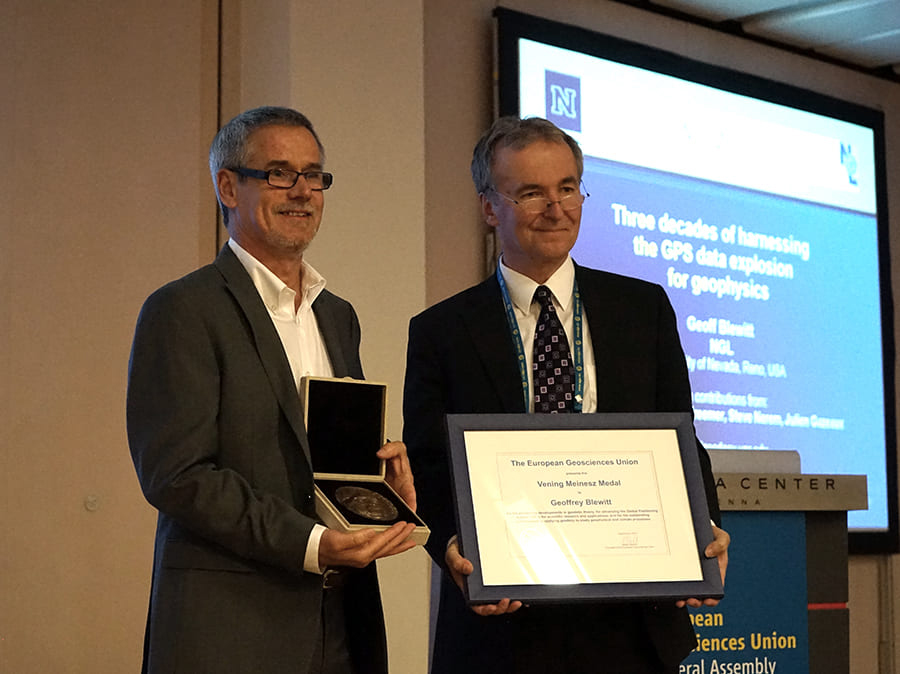 Whether measuring the Earth, watching the Sierra Nevada mountain range creep slowly upward or inventing GPS-based tsunami warning systems that track sudden movements of the earth's surface, Geoff Blewitt, director of the Nevada Geodetic Laboratory at the University of Nevada, Reno conducts imaginative and interesting research in the field of geodesy. His fellow scientists around the world have taken notice.

Blewitt has been named the 2015 recipient of the European Geosciences Union's prestigious Vening Meinesz Medal for distinguished research in Geodesy. This medal was established as a Geodesy Division award in 1998 to honor scientists who have achieved exceptional international standing in geodesy. Geodesy uses the principles of mathematics, astronomy and physics, and applies them within the capabilities of modern engineering and technology to study the measurement and representation of the Earth.

As the surface of the Earth moves, as the Earth changes shape or as the tectonic plates nudge one another, the effects can be tracked with GPS, and they are, by the Nevada Geodetic Lab's GPS network, and the largest GPS data-processing center in the world. The lab processes data from 12,000 stations around the globe, continuously, 24/7.

"Observing the Earth using geodetic satellite data is incredibly challenging, hi-tech, fun and rewarding in itself," Blewitt said. "I especially like the camaraderie in geodesy of openly sharing data and everything we do with our fellow scientists around the globe. I feel especially honored that it was my international peers who chose me to win this medal, Europe's highest award in geodesy. It feels like being appreciated by family."

Blewitt has been a professor in the College of Science's Nevada Bureau of Mines and Geology and Nevada Seismological Laboratory for 15 years. His professional career started after earning his doctorate in physics at Caltech in 1986 with Nobel Prize winner Richard Feynmann on his thesis committee. While at Caltech, Blewitt was a co-winner of the American Astrophysical Society's Bruno Rossi Prize for the discovery of extraterrestrial neutrinos from Supernova 1987 together with a team under Nobel Prize winner Fred Reines.

Blewitt then joined the NASA Jet Propulsion Laboratory to pioneer the development of GPS tracking systems, for which he won the JPL Director's Award and numerous NASA awards. He then moved into academia in 1994, becoming a professor in the Department of Geomatics, University of Newcastle in Tyne, England.  He has published over 100 peer reviewed journal articles with more than 7,000 citations, with an H-index of 41.

In April, Blewitt will present a plenary lecture at the EGU's annual meeting in Vienna when he receives the medal.

The EGU is a non-profit international union of scientists with more than 12,500 members from all over the world. It is the European counterpart to the American Geophysical Union, of which Blewitt is President-elect of the AGU Geodesy Section.