Soccer is known across the world as "the beautiful game." And for three University of Nevada, Reno students, the experience of serving as interns during the just completed 2010 World Cup soccer tournament in South Africa proved to be the stuff of the most beautiful memories imaginable. 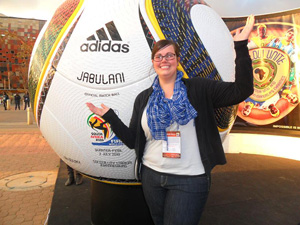 "My whole trip," said Rachel Wright, a 22-year-old senior journalism major from Las Vegas who arrived in South Africa in early May and worked as intern through the tournament’s conclusion on July 11, "feels like a highlight."

Karen Tshimanga, a 23-year-old senior majoring in journalism and communication, agreed. Everything, from the far-from-euphonious plastic horns known as "vuvuzelas," to the friendly South African people to the amazing spectacle of the world’s most-watched sporting event, was something that Tshimanga will not soon forget.

"I’m happy I was a part of it," said Tshimanga, who along with Wright and Shirley Diaz, a 20-year-old political science and international affairs major, gained their internships through the non-profit South African organization, DAD Fund, which is dedicated to helping students and young adults get jobs, internships and scholarships.

For Diaz, her World Cup experience was too vast and meaningful to fold neatly into just a few highlights. Each day, she said, was different, each with its own memorable touchstone. 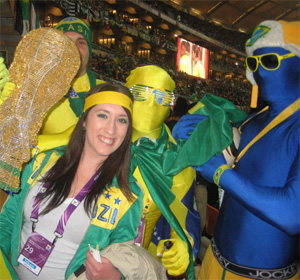 There was the monumental moment, for example, when Diaz was one of 84,000 fans crammed into Johannesburg’s Soccer City stadium for the Brazil-Ivory Coast match on June 20.

The mood was beyond festive, said Diaz, who added that she and her friends who attended the match, "made sure to rock our Brazil gear."

"There were thousands and thousands of people from all over the world, and the excitement was intoxicating," she said.

At one point, the crowd gathered in the largest, most thunderous "wave" Diaz had ever been part of.

"I’ve been part of plenty of waves before at football games and even other soccer matches, but nothing can compare to this mass wave of 84,000 people sitting on four levels screaming and yelling," she said. "It actually felt like a real wave was just coming and that when it hit us we would just drown.

There were smaller, more personal moments as well.

As part of their experience, which was arranged through a partnership between the Northern Nevada International Center and DAD Fund, interns would do service projects during down time when they were not working in media or VIP relations.

For Diaz, this meant helping teachers in local township schools, often where the socioeconomic level was not high. Diaz found students who were motivated, engaged and happy to have visitors from foreign countries. One day Diaz saw the school children receive a soccer ball from a school in England. New sports equipment was hard to find, Diaz said, and the sparkling soccer ball was received with great glee by the schoolchildren.

"It was the first time that I saw the receiving end of donations in Africa," Diaz said. "Those donations really do get somewhere, really do make a difference." 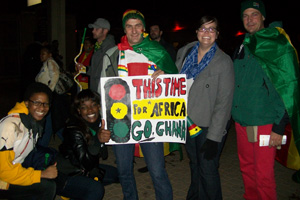 Tshimanga found her South African experience personally moving. Born in Paris, with parents who are from the Democratic Republic of the Congo, Tshimanga said she found her time in South Africa "different and interesting."

"What I’ve noticed is an identity crisis when it comes to being African, and when I meet (South African) people and we talk about where I am from, they don’t see me as ‘African,’ but as a black person from ‘there’ … aka the United States," she said. "They are still very sensitive with race and color still, and they differentiate black from South Africa, Zambia, the USA, Europe, which makes sense because it is a different experience and culture. But at the end of the day, we are all black. They don’t see it as something bad because they don’t have much knowledge about other blacks (from other places in the world).

"So I’m happy I was able to share my story and hear theirs to educate the both of us. It’s probably the most important point I’ve learned here."

Tshimanga said she quickly found a soft spot for something most Americans wished they had never heard while watching World Cup matches on ESPN: the plastic horns that sound like a swarm of nagging bees, the vuvuzelas.

Unlike the average American sports fan, who probably wished they could turn down the volume on the background noise on their televisions as the vuvuzelas buzzed incessantly, Tshimanga was more forgiving. She clearly understood that vuvuzelas were part of the World Cup experience for the South African sporting public.

"The people are very nice, and proud to be South African," she said. "They shoot their vuvuzelas – which I LOVE – at every single game and down the streets."

Wright, who worked as an intern at the Sandton FIFA Fan Fest, where a giant HD screen daily broadcasted live matches for free, said the breadth of the event was hard to imagine until she had actually arrived, and then saw it play on a daily, utterly global, level.

"Being in South Africa while the World Cup is taking place here has felt thousands of times more epic and intense than the Super Bowl," she said.

People in the United States can talk all they want about the fans of "America’s Team," the Dallas Cowboys, or the generational loyalty possessed by the Middle American fans of the Green Bay Packers or Chicago Bears, but nothing, Wright said, can compare to the world’s soccer fans.

To call them "rabid" is to diminish the joyous fervor and surging passion soccer fans feel, she said.

"People (in the United States) love their football teams, and I love my baseball team, but for the World Cup, an entire continent got behind their teams," she said. "Everyone had flags flying from their cars and wore the yellow Bafana Bafana (South Africa) jerseys on Football Fridays."

Wright got so caught up in the tournament, at one point she even lost her voice.

Like many fans, the unlikely Cinderella story of Ghana caught Wright’s attention, and when Ghana advanced to the tournament quarterfinals on July 2 with Uruguay, Wright rooted with all her might.

"I lost my voice and got even sicker than I already was shouting and cheering and blowing my vuvuzela for Ghana, and it was heart-breaking when they lost to Uruguay in penalty kicks," she said. "Being at that game and seeing (Ghana) play their hearts out was definitely a highlight for me."

The passing kindness of strangers, and the genuine interest everyone took in all of the interns, was something that Wright said constantly surprised her.

"South Africa has been wonderful and the people here could not have been nicer or more welcoming," she said. "Co-workers and even strangers have offered to cook me traditional food for dinner and invited me over to their homes for braais (barbecues).

"When I was volunteering at the Thathani Primary School in Soweto, the teachers and principal gathered all of the children to dance and sing for us and put on a big performance. Everyone wants to make you feel at home here, and it’s an amazing feeling."

"I’d come back here and travel more in a heartbeat," she said.

This event has grown exponentially since 2011