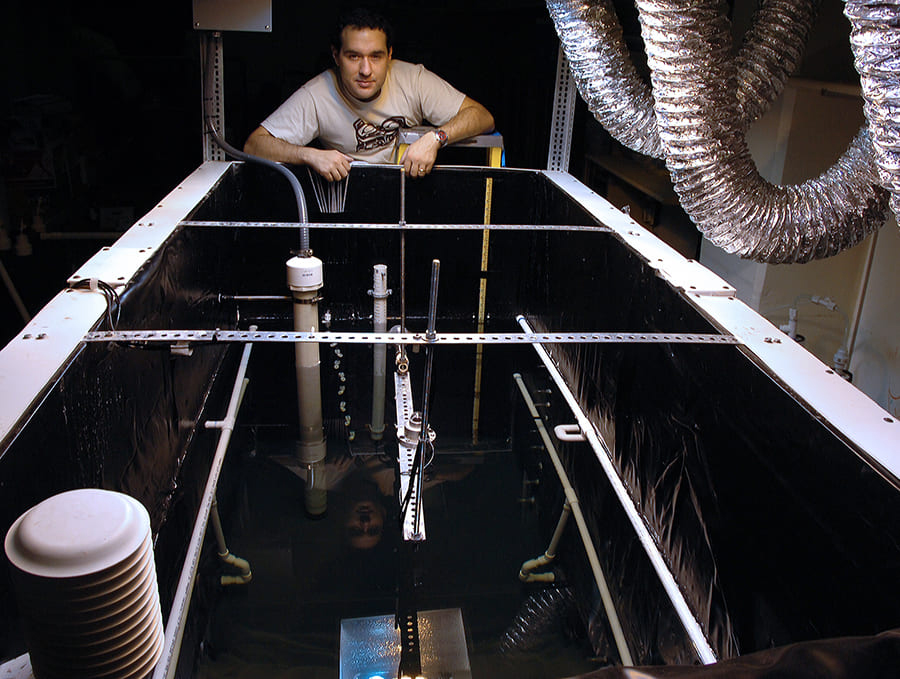 Ecosystems of terminus lakes around the world could benefit from a new system being developed at the University of Nevada, Reno to desalinate water using a specialized low-cost solar pond and patented membrane distillation system powered by renewable energy.

“These lakes – hundreds worldwide – such as the Great Salt Lake, the Salton Sea, the Aral Sea and Walker Lake here in Nevada, see a decline in water levels and an increase in salinity from both human and natural processes,” Francisco Suarez, a doctoral student in hydrological sciences at the University, said. “The high levels of salinity are dangerous and unsustainable for aquatic life.”

He presented a portion of his solar pond research last month at the annual Fall AGU (American Geophysical Union) Conference in San Francisco that was attended by 16,000 geophysicists from around the world. A paper on his project will be published in the International Journal of Heat and Mass Transfer in early 2010.

Suarez is developing an artificial salt-gradient stratification process that traps solar heat at the bottom of the solar pond and uses the collected energy to power the membrane distillation system recently patented by the University. The system is designed to help sustain the ecosystems of these closed-basin regions where there is no outflow for the water and a high evaporation rate, leaving a high concentration of minerals and salts.

The hot brine in the lower storage zone of the pond, which can reach temperatures greater than 195 degrees Fahrenheit, may then be used directly for heating, thermal desalination, or for other low-temperature thermal applications.

“Our model results show that in a two-week period, the temperature in the bottom of the solar pond increased from 68 to 126 degrees Fahrenheit and, even though the insulating layer is being eroded by double-diffusive convection, the solar pond remained stable,” Suarez explained.

The process has been highly successful in the lab in a small-scale experiment using a 400-gallon tank, where dissolved solids and precise fiber-optic temperature sensing are being used to track the process as it desalinates the water. The next step for Suarez and the research group is to build a pilot-project, demonstration-scale, low-temperature desalination system in an open environment.

Suarez is working on this novel approach for sustainable production of freshwater with Civil and Environmental Engineering Department Professor and Chair Amy Childress and Professor Scott Tyler of the Department of Geological Sciences and Engineering. Childress and colleagues developed the patented membrane distillation system and Tyler developed the distributed temperature sensing system that uses a laser and fiber-optic cable to record temperatures in the solar pond.

“We’re working on funding and permissions to build a system at Walker Lake where dissolved solids have increased by a factor of five to an unhealthy level for aquatic life, and water levels have dropped 140 feet in the past 100 years,” Tyler said.

The cost to run the system is negligible because it uses the renewable energy of the sun, trapped as heat in the bottom, to power most of the system.

“This can operate 24 hours a day using the stored energy. Very little electricity would be used,” Suarez said. “For every surface acre of solar pond we can make three acre-feet of freshwater in about one year.

“The major advantages of this system are that renewable energy is used, the system is low maintenance and the stratification process that helps drive the process uses the salts from the lake itself.”

Hydrologist Tyler said the process could serve as one component of a salinity management program and, coupled with other remediation efforts, could desalinate Walker Lake enough to make it a safe aquatic habitat. The new technology he and his colleagues have developed could be applied to declining water systems anywhere, with preference to areas with good solar capabilities and adequate freshwater flows.

Suarez also presented his research at the International Symposium on Terminus Lakes held at the University of Nevada, Reno in October 2009, the 33rd International Association of Hydraulic Engineering & Research (IAHR) Biennial Congress in Vancouver in August 2009, the Chilean Congress of Hydraulic Engineering in October 2009 and the 24th Annual WateReuse Symposium in Seattle in September 2009.

Suarez won the “Outstanding Student Paper Award” at the 2008 fall meeting of the AGU and “The George Burke Maxey Award in Water Resources Research” given by DRI.