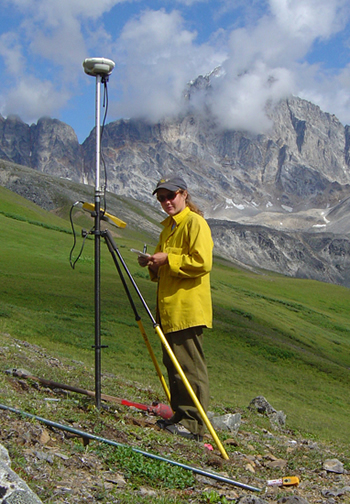 One reviewer said it was beautiful and worthy of hanging on the wall of his home. Another said it’s attractive up close and far away, which usually it’s one or the other, if any.

The reviewers, part of the Cartography Specialty Group of the Association of American Geographers, were referring to a map made by University of Nevada, Reno Ph.D. student Cassie Hansen. Her work won the 2007 National Geographic Award for mapping.

This is only one of Hansen’s many accomplishments over the years.

In May 2008, Hansen finished her master’s degree in geography at the University of Nevada. For her thesis, she looked at synoptic weather patterns and Class 5 natural avalanches in Mount Shasta, Calif.

For a class this past winter, she went to Colorado and examined the characteristics and changes of a snowpack in a two-week period as the weather changed.

“I think being a T.A. here just has been an amazing experience,” Hansen said. “I think I’m really growing and learning a lot.”

"Cassie is very confident in what she teaches," said Man, a 21-year-old Geography major from Las Vegas, Nev. "She enthusiastically shares her experiences."

A great addition to the University

“She’s more than valuable,” said Underwood, also the Nevada State Climatologist. “She’s extraordinarily valuable to the university. She’s something else.”

Her work ethic as a student and researcher, according to Underwood, is incredible.

“She’s probably the hardest working person in our department,” he said. “She has a different energy level than others, including me.”

Underwood considers his relationship to Hansen to be like a partnership. He helps her generate ideas, sets boundaries and then she makes it happen. He doesn’t have to encourage her to get something done, she just does it. She doesn’t need someone to hold her hand, he said.

“We’re very complementary,” Underwood said. “When it comes to putting projects together and making them work and getting them done, I think we have two things you’d need: someone who’s idea oriented and someone oriented with tasks.”

Growing up in a small town

Hansen grew up in Mount Shasta, a small city in Northern California. She enjoyed how close-knit the town was.

“People looked out for you,” she said. “Your friends and parents knew what you were doing … it was nice.”

Hansen’s high school graduating class consisted of about 60 students. There, her dad taught science and her uncle taught math. Though her dad was harder on the class if Hansen and her sister were in it, Hansen didn’t find it to be too awkward having her dad as her teacher.

“He pushed us and he pushed all my friends so we all got a great education,” she said.

While growing up, Hansen’s family would go hiking together at different spots and learn everything about the areas they went to. These excursions sparked an interest for Hansen in geography.

“Really, that’s an actual discipline?” Hansen remembers thinking. “I can study that … that’s for me.”

After high school, Hansen attended Skiringssal Folkehøyskole, a college in Sandjeford, Norway. She earned a certification of completion and took courses in outdoor survival skills.

“It was a great two years of discovering myself,” she said.

Hansen earned her bachelor’s degree at Humboldt State University with a major in geography and a minor in geology. There she also completed her GIS (geographical information systems) certificate.

The outdoor survival skills she learned at Skiringssal Folkehøyskole came in handy when she was surveying in the Talkeetna Mountains of Alaska a few years ago. During two days especially, possessing these skills was pertinent.

The skies were clear the day they landed on the peak. Within 20 minutes of setting up instruments, a storm came in fast.  Snow and fog quickly surrounded Hansen and the other two members of the crew. A helicopter could not pick them up due to snow cautions. They weren’t sure how long they’d be there.

The crew remained stranded for a day and a half. As she learned in her classes, Hansen prepared herself beforehand by wearing wool and bringing an emergency backpack filled with just the right supplies.

Hansen faced danger another time while working in the Talkeetna Mountains. Their crew had three groups of people working on different peaks. A helicopter transported groups between the peaks. It was a beautiful valley with no trees in sight. The other two members of Hansen’s group were on a different peak and needed to be picked up from the pilot. The helicopter pilot was on the peak Hansen was on. She told him to go pick them up and to not worry about her.

“I felt very safe there,” she recalls.

“I felt crazy amounts of adrenaline,” she said.

The female grizzly bear began charging head-on at the helicopter and towards the side where Hansen was sitting. They had no firearms. Finally, the helicopter started and the noise scared the bear away.

“Looking back on it I could have easily told the pilot to take off and leave me there and I would have been toast,” Hansen said.

After Hansen finishes her Ph.D., she wants to teach at a junior college in Northern California while doing research in snow and mountain meteorology on the side.

During these professional pursuits, Hansen wants to travel all over. She’d like to go visit friends and family in Norway. She’d love to visit Antarctica. She truly enjoys traveling and wants to go out and enjoy the world. She also hopes to ski and hike more in the future. She doesn’t get to do it as much now as she’d like to because of her busy schedule.

Hansen will be teaching a cartography course next semester at the University. This makes her one of the first Ph.D. students in the Department of Geography to fill the lecturer role for a class and not just an assistant role.

“That just goes to show you how competent she is,” Underwood said.