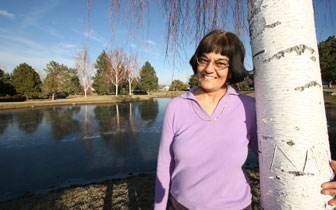 Say the name Indira Chatterjee to many of the students in the College of Engineering, and more than likely the response will be a smile, a recognition of a supremely talented teacher who has influenced many students.

In a 21-year career as a professor of electrical and biomedical engineering at the University of Nevada, Reno, few have earned a reputation like Chatterjee’s. In 1995, she was recipient of the F. Donald Tibbitts University Distinguished Teacher Award – the campus’ most prestigious teaching honor. She was given the Silver Compass Award for Extraordinary Commitment to Students in 2005. And, she has been selected and honored as faculty mentor by the Senior Scholar in the College of Engineering on three different occasions.

Given her sterling record, it might have been a bit of a surprise that Chatterjee, at least for the next few years, will be leaving the classroom to become the College of Engineering’s associate dean.

“I won’t be teaching at all,” Chatterjee said recently in her third-floor office in the Scrugham Engineering and Mines Building. “I think I will miss that. I’ve promised my students, though, that I will get them someone good (to teach her classes).”

College of Engineering Dean Manos Maragakis firmly believes that the classroom’s loss will be the college’s gain with Chatterjee’s move.

“Indira is truly a remarkable person, certainly one of our most gifted teachers, but also extremely well-rounded,” Maragakis said. “She has so many talents that go beyond the classroom. She is well-suited for this position, which will be one of the more critical pieces for our college going forward.”

Chatterjee’s responsibilities are numerous. She will be involved with overseeing the “three A’s” of the college’s operations: advising, assessment and accreditation. In addition, she will also play a role in recruiting. But more importantly she will play a key role in forming a college-wide initiative to foster research collaboration within the college. The effort will aim to land major federal research grants, will work with partnering research institutions such as the Desert Research Institute to fortify future collaborative efforts, and will work to help forge new partnerships with private industry, both locally and regionally.

“The College of Engineering must be a research-leading college,” Maragakis said. “The college needed an associate dean with a focus on the development of competitively funded research programs for many years. I am glad we are starting with this position now. I am confident Indira has the record, the capabilities, the personality and the enthusiasm to do an outstanding job in this role and I am looking forward to working with her to help our college establish the research productivity it deserves.”

Chatterjee, who admits that she enjoys the “people” aspect of being a professor and dealing with students and other professors, said she is looking forward to her new role.

“I do like working with people,” she said. “And for the most part, I have good relationships with our faculty. In fact, one of my goals is to get to know the faculty members in our college that I don’t know well. Everything these days is about teamwork. You can’t just work in isolation.”

Chatterjee said she hopes to capitalize on many of the college’s alumni who are already working in private industry as a bridge in furthering the offering of the college’s expertise and talent to the business community.

“We have a number of former students who are working at many of the companies, both large and small, here in town, so those are contacts that could prove to be beneficial,” she said. She smiled as she remembered another student-focused aspect of her former position that could be of help in her new position. “I’ve been the internship coordinator for electrical engineering for all these years, so that should be a help. Even with that background, just over the past few days, there are one or two companies that have been around for a while that have surfaced (as a possible college partner). Everything takes time, and (forming relationships) can take months at a time. If we can give these companies confidence that we have excellent students, faculty and facilities, then we have a good place to start.”

One of Chatterjee’s primary areas of focus will be the fledgling Renewable Energy Center. The Center will focus efforts and coordinate programs for competitive research with plans to increase Nevada’s national stature in the renewable energy field. It will be overlooked by a council of the deans from the Colleges of Business, Engineering, Agriculture, Biotechnology and Natural Resources, and Science. The director is a person that Chatterjee knows relatively well – her husband, Manoranjan Misra, a professor of chemical and metallurgical engineering who has long been considered on the campus’ most gifted researchers.

“I’m hoping the center will become self-sufficient in the sense that we get it started and we get people working together to get grants and establish its reputation,” Chatterjee said. “It’s an initiative that is representative not only of the many renewable resources we have in Nevada, but what can hopefully be accomplished on a national scale. I don’t know if it can depend on state funding alone. That’s why it’s important that the researchers, the colleges and the institutions involved must work together to make it work.”

Drawing on her instincts as one of the campus’ best classroom teachers, Chatterjee said another important goal is to reinforce the wonder of engineering and renewables for future University students.

“It’s always a good thing to have the public interact with things like wind or solar, where kids can push buttons and say, ‘Oh wow, so this is what happens when you talk about renewable energy,’” she said.

Chatterjee said she has enjoyed working with Maragakis.

“The dean has been very open to suggestions and he asks my opinion,” she said. She has been impressed by Maragakis’ seeming never-ending source of energy. “He’s got a lot of energy, he really does,” she said of the Maragakis, a former successful chair of the Department of Civil and Environmental Engineering. “I’ve enjoyed watching him in action. I can see why he has been so successful. I’ve seen him interact with people – he’s very good at encouraging people to come to him with ideas.”

Of course, Chatterjee isn’t bad on interaction herself. She hopes that if anything, her new post will simply be a continuation of what she has done best for more than 20 years at the University.

How has the University Libraries managed to make resources available for use by students, staff, and faculty while in quarantine? A lot of behind-the-scenes work, creativity and collaboration

A list of award winners; annual ceremony to be held at later date during fall semester