Building the VR culture at Nevada

The multimedia production specialist for University Libraries talks about virtual reality culture and emerging technology on the University campus.

Building the VR culture at Nevada

Virtual reality holds the key to a whole new world of possibilities. When you put the headset over your eyes, you may be standing on a serene mountainside or playing as an robot avatar shooting drones out of the sky. The transportative experiences of virtual reality (VR) are fully immersive.

Within the walls of University Libraries, we're watching this technology emerge as a powerful tool in many different ways. In addition to entertainment and gaming applications, VR has inspired new approaches to storytelling, teaching, vocational training, engineering and beyond. The unrestrained exploration of various VR use cases, as they're called, was the catalyst for constructing the @Reality in the Mathewson-IGT Knowledge Center. There was a little bit of "if we build it, they will come" mentality in the proposal to invest in such an early technology. But with more than 700 visitors since November, it seems like University students and faculty are beginning to catch the same VR bug I have.

In order to harness some of the buzz and energy around the @Reality, I suggested we host workshops to spur content creation and programming for virtual reality. We wanted to make it open for both students and faculty.

Even though some people may view science or technology as a rigid, problem-based world, I have always been intrigued by the creativity of technology. I originally came to the University of Nevada, Reno curious about audio engineering. There wasn't a major available for my interests so decided to make my own path with both technical and creative elements to my studies. I combined a Bachelor of Science in Electrical Engineering with a Minor in Music Industry in 2014. The knowledge that I learned throughout my undergraduate journey taught me that there are so many avenues to be both technical and creative outside of the audio engineering realm. It lead to my eventual position as Multimedia Production Specialist in the @One of the Knowledge Center.

To be completely honest, I was unsure of the direction I wanted to focus my skills on when I started my new position. With a background in electrical engineering and a passion in the arts, I started focusing on video production. I thought it was fascinating how media could have an impact on the world. Simply watching a television monitor could bring someone to tears, or inspire someone to make changes to their lifestyle. And then I learned about 360 video, an immersive style of video where you actually feel part of the story.

Tod Colegrove, head of the DeLaMare Library, reached out to see if I would like to join in a 360 video archival project he was applying for through Burning Man Media Mecca. At the time I thought it sounded like a fun and interesting opportunity. I didn't know that it would change my life forever.

After bringing back the 360 footage from the playa, I became completely enamored with virtual reality. The challenges I faced while putting that footage together was both technical and creative, something that was right up my alley. However, another thing I didn't realize was the impact it would have on other people's lives. It was incredible to be able to bring "Burners" back to the playa, but it was even better to share that experience with those who had never been. And that's when I met Evan Gadda.

For those of you who have spent some time in the @One of the Knowledge Center, you may have heard Evan's infectious laugh. For those who do not know him, Evan has cerebral palsy and ambulates in a power wheelchair. This has never slowed him down, though, as he has earned two degrees and is working towards a masters in musical theatre. He also has always dreamed of attending the Burning Man festival, but his asthma and the unyielding playa dust made this particular dream physically impossible. But not virtually impossible. With the Burning Man 360 video I created, our team in the @One was able to actually bring Evan there. We filmed his reaction to Burning Man and other VR experiences, and it inspired a short documentary, "Walking With Reality." We were able to capture the true potential of virtual reality. With this amazing technology, Evan was able to walk in our shoes just as much as we were able to step into his.

Harnessing the "What If" Factor

Every time a new person tries out VR, it's amazing to see the new ideas each person comes up with. People take the headset off and the "What If" statements begin. Every person can dream up wonderful innovative and practical uses for the technology. It's capturing this motivation and arming people with the skills to bring their "What Ifs" to life. VR Sessions aims to encourage the entire community of the University of Nevada, Reno to learn, create, and develop whatever curiosity you have about virtual reality. We offer training in 360 video and 3D programming. We created a forum for people to share their visions. We created a community.

In addition to these sessions, the Wolf Shop in the Joe is also encouraging students to create and submit their work to the VR contest they will be hosting throughout the semester. The contest has two categories, 360 Video and Immersive Content, with an Oculus virtual reality headsets as the main prize for each category. This is another way to encourage the creative and technical spirit on this campus. The Wolf Shop will be promoting this contest throughout the rest of the semester. Their website contains the details. Deadline for the contest submissions will be April 27th.

VR Sessions will take place every Tuesday at 5:00 pm until the end of April. There will be many activities throughout the semester including workshops on 360 video, 360 audio, Unity programming, and even guest speakers working in the field. The Dynamic Media Lab, Equipment Checkout, and @Reality in the @One already have the tools needed to create virtual reality. There are 360 cameras available through the checkout and software installed on the computers to already start developing. Through advanced trainings, students and faculty can also gain access to the GoPro Omni 360 camera, which can creates high quality 360 videos. VR Sessions is a place where ideas can be developed into a true reality. 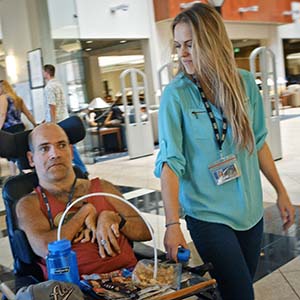