Graduation: 'The worst and best part is that it's not over yet'

Graduating from college can mean many things, including that the journey is far from over

Good Evening my fellow Asian Americans and Pacific Islanders. I would like to thank Mr. Derek Furukawa for giving me the honor to be your student speaker tonight. Though, as an immigrant, I am still confused whether or not I am considered Asian, Pacific Islander, or other. I'll have to wait for my "23 and Me" test results to come back, if it comes out 50% White, then I'm definitely Pacific Islander. I'd also like to thank Derek for choosing me, because I definitely don't fit the mold of the model minority. I wasn't even aware of the term until I reached high school, however, I indirectly experienced the negative side-effects of what it meant to be a model minority and I'd like to share with you how.

Like some of you, I was tricked into immigrating to these United States, California to be exact. My mom said, "We're going Disneyland, SeaWorld (before blackfish was a documentary), Legoland, all the lands" and I was so excited. I was 9 years old and I thought I'd be having the best vacation in the fourth grade. After my mother took me to the promised lands, I asked her, "Can we go back soon?" She told me, "You can go back as much as you'd like!" I said, "Isn't that expensive?" She looked at me and said, "I have something to tell you."

Next thing I know we moved into a two bedroom apartment in Temecula, California... nine years later I graduated High school... longest vacation so far.

My status in this country changed as I grew up here. I was an immigrant all throughout elementary school and middle school, a permanent resident in high school and college, and I just became a naturalized citizen last semester in my senior year of college. It's been almost 14 years since my mom clickbaited me to move from the Philippines. I say clickbait because she described America to be this amazing country, with Disneyland and SeaWorld, but in reality, it's been a rough 14 years. My first year in the States, I moved to three different cities across Southern California, switched schools twice, made new friends, lost new friends, and I got a hip disease out of nowhere and I couldn't walk for a year. However, knowing that my parents uprooted their lives and gave up everything in the Philippines to give my brother and me a better education and a chance at a better life, I just knew I couldn't let it all go to waste. I'm sure most of you are familiar with how the story goes.

Like all of you, school was the number one priority. I'd study really hard and get nothing less of an A, otherwise risk the chance of being deported by my own parents. They didn't travel thousands of miles for me to get a C! This ongoing pressure to excel followed me through my adolescence, and then I reached a point where I developed what is called today, "clinical depression." I always had a hard time making friends because I never stayed long enough in one place to keep them, or I was afraid they'd leave once they found out how broken I was. I had "friends" but because of depression, I felt like I was always alone. I didn't feel understood. I didn't think anyone would truly understand the hardships I faced as an immigrant. Mental illness always had a negative stigma in most Asian households, and you were lucky enough if your parents didn't try to cure it with Vicks VapoRub or Tiger Balm.

The pressure felt higher once I hit high school, that's when it was really bad. I was enrolled in a rigorous honors program that took a huge toll on my mental health. The pressure to get perfect grades so I could attend a great college was at an all time high. Eventually, I couldn't keep up. There would be days where I would shut down, I wouldn't touch my assignments or talk to anyone in my class. This would happen every year, where I just couldn't mentally find the strength to keep going. I wasn't sure what was happening, but it was like trying to remove a half-way cooked waffle from a waffle iron but you forgot to spray it with cooking oil so you're just struggling trying to get it out of the pan. Basically that's what it was like to get me out of bed. I was a half-way cooked waffle.

Well, this waffle transferred to UNR. I started my first two years in community college, which was frowned upon and almost looked at as a sign of failure - failure that I didn't attend a top public university or an Ivy League. Though I did apply to Harvard - just to frame the rejection letter. After two years, I thought I'd be transferring to my dream schools in Boston, instead I found myself being more practical and realistic. That's when I decided to transfer to the University of Nevada, Reno. I get asked a lot, "Why did you move here from LA?" It's really simple. It was cheaper. My family couldn't afford to put me through college, so I needed a more affordable option. Had I been to Reno before? No. My first time in Reno was the day I signed a lease to my apartment. I knew nothing about it. I thought the Wild Orchid was an amusement park, only to figure out it was half of what I thought. However, I don't regret it one bit. I was excited that maybe moving to a new city, new school, with new friends, it would help me with my academic success and mental health. I was wrong.

My grades were almost too good of a reflection of my mental health. I couldn't really seek help because I wasn't accustomed to it. I was raised to be strong, resilient, resourceful - the type of daughter who could figure it out on her own. Unfortunately, this was one of the battles I wish I sought help with the most. It wasn't until last semester I reached out for help in the counseling center. That was the first time I ever experienced professional therapy. It wasn't until this year that I've finally embraced my mental illness and used it to be a voice for those who are silenced. I openly talk about my experience with mental illness so that those who feel pressured to be silent can have someone to relate to, or even talk to. Throughout my journey in college, I aimed to shed light on those who are quietly suffering and can't speak out because of the stigma on mental health, especially in the Asian community.

Forging my own identity was something I now have control over, free from my parents and everyone else's expectations. While it's taken me this long to be okay with this decision, I know that this is not uniform among the people I am speaking for today. During my time in college, I grew to be a person who is not victimized by it all. I know I'll still have my days, but it wasn't until this past year where I've come to terms that I was not defined by my setbacks. I'm creative. I'm resourceful. I'm strong. I'm smart. I survived and I'm graduating. That's what matters. What matters is that despite the challenges you've faced, the constant pressure you've all felt to make your parents and friends proud, and going through life with unrecognized efforts just because you're Asian and it's expected of you, what matters is that you didn't give up to get there. The worst and best part is that it's not over yet. Because until I can see a job offer with a salary, matching 401k and health benefits, plus dental and vision, I have yet to achieve the American Dream. To attend college because of our parents' sacrifices is an honor, and for them to bear witness of this accomplishment only proves that their American Dream came true, too. 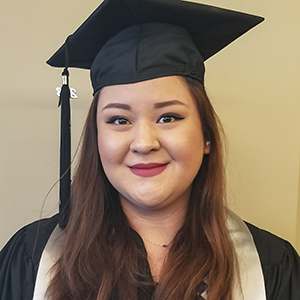