'Because I'd Hate to Just Disappear'

Emeritus English Professor Don Hardy and his wife, Heather Hardy, the emeritus dean of CLA, have a new book detailing in real-time how the couple weathered Don's leukemia and chemotherapy.

(Editor's note: Earlier this year, Don Hardy, an emeritus professor of English and a former winner of the Tibbitts Teaching Award, along with his wife, Heather, the emeritus dean of the College of Liberal Arts, released the book, "Because I'd Hate to Just Disappear: My Cancer, My Self, Our Story" (University of Nevada Press, 2018). In the book, Don and Heather explore in real-time the two-year period in which Don is diagnosed with leukemia and then undergoes chemotherapy and treatment. In the excerpt below, Don writes about his love of animals, the prospect of an afterlife, why he is known as "Twerk" among his bicycle-riding English professor friends, and the sort of macabre humor that can help make chemotherapy bearable. The accompanying photo is from the day in April 2016 when Provost Kevin Carman interrupted Don Hardy's class to give Don the news he'd been awarded the Tibbitts as the campus' finest teacher.)

ONE OF MY VERY SMARTEST STUDENTS said to me once, "All dog books end the same." I'll never forget that bold statement about mortality because although I can't say for sure (I haven't read all dog books), it is nevertheless likely true because that's part of the dog-human contract, unfortunately. Now that I'm in the position of possibly being survived by my current dog love object-Lyle-and my wife-Heather-it seems especially important to make the most of our time together and to rethink the plot not just of my life but of my afterlife.

When I think of an afterlife, what I think of most frequently is not heaven or hell or dispersal of my atoms among the stars or even, more likely, among the dirt and rocks in the backyard. I think of all the animals who have befriended me without a word. I think most human souls are far too complicated to reunite with after death, at least immediately. I don't know about you, but I'm not especially anticipating immediate and eternal bliss in the presence of God-after judgment, of course. I feel just now that I would need a long rest from anything that I was created in the image of, or from others who were created in a similar image. Mostly I feel that I would need a break from creatures gifted with language. I love my human friends and relatives now, but really, wouldn't it be nice when we're done with this life to just sit by a river with all the souls of the dogs, cats, hamsters, and other furry friends that we've shared precious time with and simply watch the river and play and nap for, oh, I don't know, a thousand years?

Talk is important to me now. Before cancer barged into our lives, Heather and I used to enjoy eating dinner while watching television. We talked through the show or movie usually, because Heather does that. She talks to the actors, to the directors, to the producers. She asks me questions when she is really puzzled by something. My usual honest response is "I haven't got a clue" because she normally wants to know why humans behave in the odd ways they do, especially in movies. Now we never watch television during dinner. We sit at the dinner table and talk over the day, or she just keeps me company if all I can do is slump over a plate in chemo exhaustion. But we normally talk. I've learned that she has a secret identity; her secret identity name is Tanya. I never get it right. I call her Tonya or Sonya or, even worse when she's in that mood, Heather. I haven't got the fuzziest idea what this is all about, but Tanya shows up every now and then.

Most of my friends are academics, because you make friends with people you spend time with, and university work is a time-consuming occupation-wonderful but time consuming. Just last year I learned something about nicknames from my academic friends. In my bicycle gang of English professors, I wanted to be called Thunder. I was very early on in my own mind designing my own spandex Thunder clothing line. But I learned pretty quickly that you don't get to choose your own nickname. My biker nickname is now firmly established as Twerk, and it has spread to other contexts. It's not the name I chose; it's the name I earned!

Unlike the afterlife, where I suspect language won't be necessary, in this life it's inescapable. And sometimes what you hear can break your heart. Last week, I overheard a friend of a napping patient in chemotherapy say to another friend, "We're considering stopping the chemotherapy and going into hospice because the chemo doesn't seem to be working and it's increasing her suffering too much." She wept as she said this. You can't unhear something like that.

I have a notebook full of random thoughts on language and chemotherapy: "My nurse listed the drugs for the first day last week: ‘Decadron, Benadryl, Aloxi, Emend, Pepcid, rituximab, fludarabine, cyclophosphamide. All the eight reindeer.'" The nurses have their jokes that get me every single time: "Now you're on drizzle" for the start of the first saline drip; "Now you're on the rinse cycle" for the start of the final saline drip. I love the macabre humor of the infusion room. Some of us are sufficiently lucky to be healthy enough to laugh in the face of the brutal drugs, the assaults on our well-being, the start of the long slog through the treatment week and the following recovery week. "You're cookin' now!" In a hundred years, I hope cancer patients can look back on standard treatments of today and be thankful that cancer treatment has progressed both in its humaneness and its effectiveness so that laughter can always be about something other than chasing away fear-gallows humor without the noose.

I have only one chemo treatment week left, in the third week of March. I'm going to miss my nurses most of all. Some of them have discovered that I love documentaries on Netflix, and this last time around we swapped favorites. They recommended Samsara, Tiny, Burt's Bees, and I Am. I recommended So Much So Fast, The Queen of Versailles, Blackfish (they'd seen it), and Honey Badgers: Masters of Mayhem. Samsara is probably the most visually rapturous documentary I've ever seen; and it has not one syllable of human language. I won't ruin it for you with language.

This past week, I played a game with a nurse who weighs me every single day before the chemo starts.

I was wrong every single day. How can one's weight change three days in a row? I even wore the same clothes to try to win. I'm going to miss my nurses.

(From Don Hardy, with Heather Hardy, "Because I'd Hate to Just Disappear: My Cancer, My Self, Our Story." Reno & Las Vegas: University of Nevada Press, 2018.) 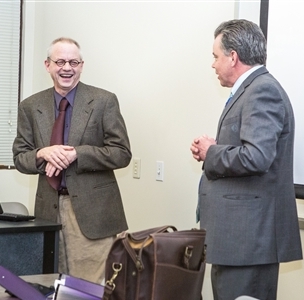 By: Don Hardy
Emeritus Professor of English, Department of English