The University as an economic anchor

VPRI Mridul Gautam's speech at Governor's Conference explains how things move "at the speed of Nevada."

September 05, 2017
By: Mridul Gautam
Vice President for Research and Innovation

(Editor's Note: By anchoring Nevada's burgeoning innovation ecosystem, Nevada's research-universities are connected to the upswing in smaller, high-tech, knowledge-based, entrepreneurial businesses and the creation of jobs. In an address to the 600+ attendees at the Governor's Conference on Business on Aug. 17, Vice President for Research and Innovation Mridul Gautam discussed the connection of Nevada's high-impact research universities to the state's successful economic development efforts. His remarks follow.)

It's an honor and a privilege to stand here and talk to you about our collective efforts that are helping build the high-energy, vibrant innovation ecosystems anchored by Nevada's research-universities.

Our state's economic resurgence is often characterized by the many worldwide brands that have chosen to do business in Nevada. It's an impressive list that includes Tesla, Switch, Apple, Google and many more.

New faces, new leaders and new technologies are showing up in Nevada from all over the country and the world: Chicago, Santa Barbara, Bay Area, Australia, Israel ... I could go on.   However, the upswing in smaller high-tech, knowledge-based, dynamic and entrepreneurial businesses is helping in the creation of high paying jobs in Nevada, and these are more often than not connected with our research-universities.

I'll start with a story about Roger Chen.

Roger is a highly successful entrepreneur whose first, Bay Area biotech startup contributed to the next generation of DNA sequencing. His startup was acquired by a significant, international pharmaceutical company. Soon after, Roger - who is a true serial entrepreneur - was ready to pursue his next private-research venture.   He began to explore several states as a potential option, and - wisely - Nevada was on his list.

I was in Washington, D.C. in April 2016. It was a Friday when I got an email from folks back in Nevada who had learned of someone who contacted the state about potentially relocating his venture. A few of us connected about this over the weekend and by Tuesday, I was communicating with Roger Chen.   Days later he was on the University of Nevada, Reno campus to meet with a group of individuals, each representing a resource or area of expertise that could have a touch point to his new research venture.

It moved quickly - it moved at the speed of Nevada.

All of this coincided with our development of the unique Biosciences Entrepreneurial Lab at the University. The BEL, as we call it, is a "wet lab" space available to start-up companies and operated as part of the Nevada Center for Applied Research. This innovative approach provides industry and entrepreneurs with access to the talent, facilities and equipment on campus, through customized agreements. Together, the Nevada Center for Applied Research and the BEL are contributing to high-tech business incubation and the emergence of a regional biotech hub.

Roger was drawn to this amazing wealth of world-class, high-tech services, the talent pool we could provide, Reno's quality-of-life and cost-of-living for his employees. A few meetings and visits later, Roger made the decision to move his business to Reno and the BEL.   In Reno, he got what he could never get in the Bay Area, and if he could have, it would have been cost prohibitive.   Today, his company, Bioelectronica, is expanding. Roger and his team are connecting with our researchers, creating jobs and have hired some of our graduates.

Another wonderful example is Flirtey, a pioneer in the development of drone delivery.

About two and a half years ago, Doug Erwin of EDAWN introduced me to these two dynamic young Australians outside Campo. They wanted to start a drone delivery company. Within three months they came on campus with two duffle bags and some equipment.   Flirtey started with us on campus, it grew, raised millions of dollars in capital, hired lots of employees, and moved on to a new location that was significantly larger. As we like to say, Flirtey graduated. Flirtey is back though, and is conducting a new round of collaborative research with our faculty.

What's especially good about the Bioelectronica and Flirtey stories is that they are two of many such stories unfolding in and around this state, and many of them are connected with our universities.   We are seeing something happen here in Nevada, and the research universities are anchoring this resurgence, as all high impact universities should do in their respective regions.   We've produced a new video that includes several of the new faces in Nevada sharing how this is all coming together.

We have a pretty dynamic Innovation Ecosystem in place.

It has come together brick by brick, and every brick plays a role. The University is taking responsibility for several bricks, but the ecosystem is working and is strong because so many bricks are firmly in place: a visionary Governor, a will-do Governor's Office of Economic Development, a committed NSHE Board of Regents, the economic development authorities across our state including EDAWN here in this region, the Nevada Department of Business and Industry, all the higher education institutions, and all of the investors, mentors, and businesspeople who participate in organizations such as the Chambers of Commerce, NCET, various business incubator spaces, and in gatherings like this.

When you think about it, none of the bricks I am describing is new. Everything was here.  However, it was the mindset ... the approach ... that needed to change, and it has. Deeper, meaningful, action-oriented collaborations needed to happen, and they have. Our Innovation Ecosystem needed to be responsive and flexible, and it is.

Together we are seeing success, and there is a new optimism and energy that comes of this. One year in, the combined contributions of the University's Innevation Center in downtown Reno and our Nevada Center for Applied Research include more than 50 companies engaged, eight venture-funded startups and six faculty/student spinout companies.

We are not Silicon Valley. We are Nevada, and we have our own unique strengths. Nevada is an ideal alternative, the entrepreneurs and business locating here are telling us this.

If anything, the challenge ahead is continuing to listen, being nimble and coming to better understand what we are, what industry needs, what makes our region and state special, and why success is being achieved.

As I look out at this room, I see people who have come together to learn and share, and be part of this paradigm shift. You represent the larger innovation ecosystem, and the energy, optimism and focus that is making it happen.   Friends, this region, this state, this University ... we're open for business. 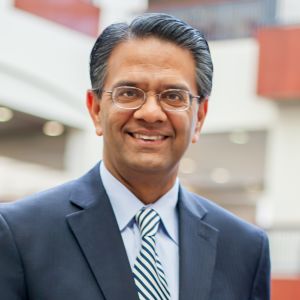 By: Mridul Gautam
Vice President for Research and Innovation