San Francisco Pride event: Embracing who you are

Student Efrain Gonzalez reflects on his recent participation in San Francisco's Pride event, and why it's an event for all people

I've always heard so much about gay culture and the richness it has brought to many places around the world, especially San Francisco. I knew that this year I would finally be able to participate in the festivities of San Francisco's Gay Pride. The only Pride Festival I had been to before was the one located in Las Vegas perhaps two years back, so I had some idea on what to expect. Let me tell you, it was nothing like what I had in mind.

The Pride Festival that lasted a whole weekend hit me like a bus. The second I stepped on those streets of downtown San Francisco, I knew I was in the right spot at the right time to finally celebrate who I was.  I am member of the LGBTQIA+ community. I am a Bisexual man. There was a different feeling in the air. The openness, the carefree attitudes, the friendliness and acceptance in the eyes of strangers that passed by you. Love was all that I felt. My friends, who consider themselves allies, found themselves in awe by the masses of crowds of people wearing rainbow headbands and gorgeous wigs that flowed all the way down men's backs.

It was a sight to see for all of us. None of us expected Pride to be so wonderful and energetic.

As we drove back, I thought to myself, "Why can't everyone see what I see? Why can't we all just accept the love around us? Why can't we treat each other like human beings and respect each other's preferences?"

That's when it dawned on me. Just like it dawned on my friend's faces. They did not realize what world they were stepping in until they took their first step. Until they were exposed to the gay culture and the atmosphere free of hate and prejudice. That is what Pride is. That is the emotion I felt when I attended the festival.

It was all pride. Pride for how far the community has come. Pride for the people that have fought the hatred. Pride in myself for accepting who I am no matter what anyone says.

For that reason, I knew I would become a yearly visitor to San Francisco's Gay Pride Festival. In a state that is considered a "political battle zone," it is just as important to have a Pride here in Reno, Nevada. To educate the community about what this group of people has to offer. Just like many communities, we are here to help and to foster acceptance and friendship. To tear away the stereotypes and show others that there are allies out there just like them. We want to show the younger and older generations that they should not fear who they are. They should be proud. Proud to be part of our community. 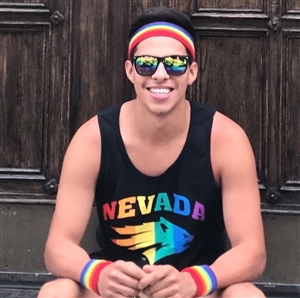