How I spend my sabbatical: Chapter 5, 'Living and working in a (medieval Italian) university town’

In his latest installment of how he's spending his sabbatical, Ned Schoolman reflects on life, work and some new academic opportunities while living in Padua, Italy.

(Editor's note: Assistant Professor of History Edward "Ned" Schoolman has been filing reports about his sabbatical in Europe. This is Chapter 5.)

Since September, I have been a visiting scholar and guest of the history department at the University of Padova.  Founded in 1222, it is one of the oldest universities in Europe, in a city with a rich history dating back to the Roman republic (for reference, the University of Nevada, Reno was founded in 1874, while Harvard was founded in 1636). The city, also known as Padua in English, and is also famous as the setting of Shakespeare's The Taming of the Shrew.  Living in Padova has offered stark differences from my normal routines in Reno, while working here has presented abundant new academic opportunities.

Padova itself is surrounded by a double set of medieval walls and is crossed by a series of canals, effectively making the center of town an island (one which is for the most part car-free). On my daily walk to my office (everyone either walks or bikes), I first pass a medieval tower that was turned into an astronomical observatory, "La Specola", in the 18th century but commonly known as the "torre di Galileo" after the famous scholar who taught at the university at the end of the 16th and the beginning of the 17th century. 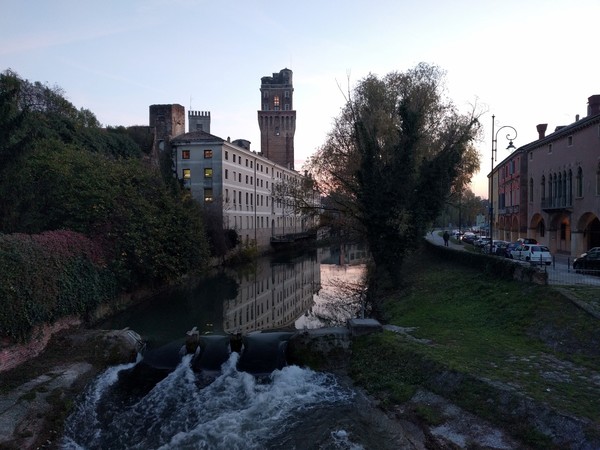 La Specola, the canal, and porticoed sidewalks in Padova.

I cross one of the major canals and move mostly under the porticos of fifteenth and sixteenth century buildings that hang over the majority of the narrow sidewalks. I pass building which have reused architectural fragments from the Roman city lying beneath the streets, and churches with amazing fourteenth century frescos. (Although the Cappella degli Scrovegni is perhaps the most famous in the city, painted in 1305 by Giotto, my favorite has been that those in baptistery completed two generations later by Giusto de'Menabuoi in 1375). The culture of coffee is strong in Padova, as in most places in Italy, and my research is fueled each day by at least two small, strong espressos (known simply as "cafè") and a new discovery for me, the "macciatone" - which is like a cappuccino but with less steamed milk. The city is littered with small bars, pastry shops, and cafes where the throngs of students are repowered, so access to coffee is too easy.  For meals, almost every day the two main piazzas are transformed into markets where fresh fruits and vegetables are sold, and in the street level of the Palazzo della Ragione (the "Palace of Reason" that served as the medieval city hall), stalls sell meats, cheeses and other local specialties.

While the city is fascinating, I spend the majority of my time in my office in the history department (did I mention that it is in a late medieval Palazzo?) or in one of the many libraries of the university. Like many medieval universities, the campus of the University of Padova is spread across the entire city, with certain buildings sometimes housing multiple departments, or single departments taking up many buildings. I feel this most acutely when using the libraries.  While the University of Nevada, Reno has four libraries on campus, the Knowledge Center (which also houses the Basque Library), DelaMare, and the Savitt Medical Library, there are 39 individual university libraries (with their own buildings and organizational systems) that form nine major libraries at the University of Padova. On any given day, I find myself using the closest library to my office in the history department (the Biblioteca del Dipartmento di Storia), but often find literary sources and texts in the "Biblioteca Interdepartimentale Tito Livio." Some of my research involves theoretical models taken from social science, so to consult some books I have to walk across town to use the "Emeroteca del Polo di Scienze Sociali - 'Ca' Borin'." In addition to these and others of the 39 university libraries there are other specialized public library - many for religious history - as will as the state archives of the city, which include note only the records of the medieval town, but the archives of documents and manuscripts from many of the city's monasteries (many which were dissolved or suppressed in the early 19th century by Napoleon).

So why go from library to library and building to building? To find the books I need to prepare for workshops! In addition to working on two major research projects, the subject of the next blog post, I have become involved in the every day academic life of the university. This has been the work of my generous host and sponsor, Prof. Cristina La Rocca, who has arranged for me to meet with graduate students and postdoctoral researchers whose interests intersect with my own, invited me to the granting of honorary degrees in some of the university's oldest buildings, and organized workshops directly related to my research.

Most recent of these was a "book presentation" and bilingual workshop on the history and development of urban elites in medieval Italy. In the morning, Irene Barbiera, a medieval historian and demographer who works at the University of Padova's department of statistical science, and I gave short introductions to and directed an hours-worth of questions on a new book, L'Aristocrazia Toscana: Sette secoli (VI-XII) (or, The Tuscan Aristocracy: Seven Centuries (6th-12th) by Maria Elena Cortese. 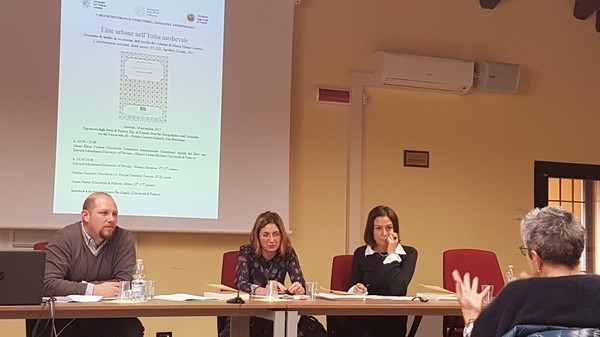 This book, a synthetic study of the elites from a single region in historical, documentary, and archaeological sources, provided a rich ground for later discussion in the afternoon with three presentations: I spoke on the elite of Ravenna, James Norrie (Oxford) spoke on Milan, and Stefano Gasparri (Venice) on the Venetian elite.

Workshops like these are regular features of my academic life at the University of Nevada, Reno, which regularly hosts internationally recognized scholars for workshops, seminars and conferences. For me, Padova allows the continuation of an active engagement in topics both close to my own interests and far from them, as I focus on winding down one book project and beginning another, the topics of the chapter.