How I spend my sabbatical: Chapter 4, 'A tale of two conferences’

In his latest installment of how he's spending his sabbatical, Ned Schoolman reflects on his time at a conference in Rome.

(Editor's note: Assistant Professor of History Edward "Ned" Schoolman has been filing reports about his sabbatical in Europe. This is Chapter 4.)

I prepared this fourth installment on what professors do during their sabbaticals at the Palazzo Falconieri, home of the Hungarian Academy (the national cultural institute) in Rome.

As noted in my earlier posts, a sabbatical provides the time to explore new projects, to take measure of current research directions and collaborations, and to mark the completion of others. 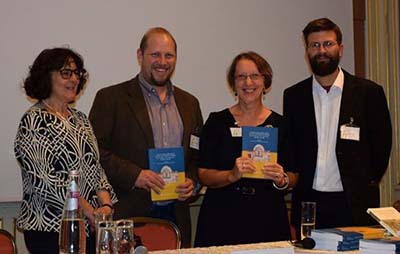 Although I have been living in the northern Italian city of Padova for the last month, where I am currently a visiting professor at the University there, I was in Rome the first few days of October at a conference The Saints of Rome: Diffusion And Reception from Late Antiquity to the Early Modern Period, sponsored by both the Hungarian and Croatian hagiography societies, and held in the seventeenth century Palazzo Falconieri.  The building itself was one of the highlights, and we were allowed to visit the upper story loggia designed by Borromini followed the second day of fantastic presentations by scholars from Italy, Hungary, Croatia, and across Europe.

At the conference, I had two roles: First, I presented on an aspect of my research engaged with history and religious culture of the city of Ravenna, a late antique capital of Italy and rival of Rome.  My focus was on the inclusion of specifically Roman saints into the religious fabric of early medieval Ravenna over a seven hundred year period (a task made possible by surviving manuscripts and church decorations).

The conference, however, also served as a book launch for a volume I co-edited with Marianne Saghy of Central European University: Pagans and Christians in the Late Roman Empire. New Evidence, New Approaches (4th-8th centuries).

Its formal presentation at the conference, with lectures by Rita Lizzi Testa (University of Perugia) and Trpimir Vedriš (University of Zagreb) and publication (made possible in part with the support of UNR's Office of Research and Innovation) mark the culmination of a process that began in 2013. That year, I presented at a conference hosted by CEU in Budapest on that very topic, and was asked to help serve as editor as the revised papers began to be returned.  In my role, I read, commented, and edited some of the papers, and helped to secure peer-reviewers for further in-depth comments on all (even my own submission on Late Roman lamps). 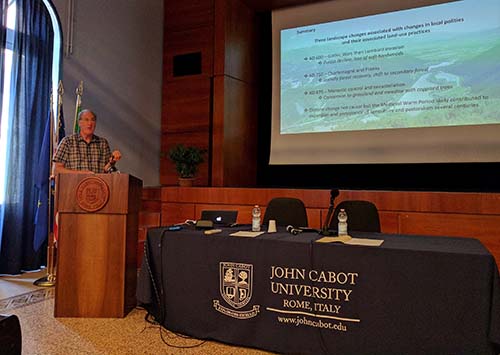 Yet the conference on the Saints of Rome was actually the second time I was in the city for an academic meeting while on sabbatical.  In June, I held a very different position as coordinator for a two-day workshop on the intersections between history, art history, archaeology, geology, and paleoecology in medieval Italy held at John Cabot University (with the amazing help of Lila Yawn, their medieval art historian):  Interpreting the Human and Environmental History of Medieval Italy: Sources, Methods, and Potential/ Interpretazione della storia umana e ambientale d'Italia medievale: Fonti, metodi e potenzialità. For me personally, this workshop checked the box of "exploring new projects" as my presentation, "From Ravenna to Rieti: Describing Landscape in Medieval Italian Charters," was my first to engage in the environmental and ecological aspects of the period I study.  But it was also a moment to take measure of the growing collaboration with an expert on forestry and a geographer: Gianluca Piovesan of the University of Viterbo and Scott Mensing from UNR's own geography department.  Scott and Gianluca helped to select and invite the other speakers of our workshop, and in addition to presenting their own approaches to interpreting local environmental changes in medieval Italy, we spent the second day of the workshop discussing the future directions of our collaborations.  At its conclusion, we had enlarged our global network and clarified the next phases of our research.

As I look at my calendar for the next few months while on sabbatical, I see a number of other workshops, conferences, and lectures, in Turku (Finland), Oxford (England), Tübingen (Germany) and right here in Padova, all of which will present new opportunities to share various aspects of my research.   And like the two in Rome, they will also mark conclusions and beginnings.

In the next installment, being on sabbatical at the University of Padova...