How I spent my summer sabbatical: Chapter 3, 'Windows in Medieval Libraries'

In his latest installment of how he spent his summer sabbatical, Ned Schoolman studies medieval manuscripts in Italy

(Editor's note: Assistant Professor of History Edward "Ned" Schoolman has been filing reports this summer about his summer sabbatical in Europe. This is Chapter 3.)

Outside of the window, I could hear the swifts battle in the afternoon light.  Glancing up from my manuscripts, I could see the upper reaches of the Arno River heading towards the medieval hilltop town of Bibbiena, framed by the Tuscan Apennine Mountains, and then disappearing into the Italian countryside in the distance.  Focusing back into my room, I noticed the fourteenth century frescos on upper portions of the walls where they meet the ceiling.

The library in which I was working, known as La Biblioteca Rilli-Vettori, serves as both the local library for the city of Poppi and as the home for an amazing collection of medieval and early modern manuscripts (handwritten books) and early printed books.[1]

The view and the frescos are features of its location, within the medieval castle of the Conti Guidi, perched atop a hill overlooking the medieval town.  The castle was built by a noble family (the Guidi) which controlled the territory throughout the valley and beyond.  They had originally come from the neighboring region of Romagna in the tenth century, and the castle they built in Poppi was just one of a number of fortifications throughout the area that they constructed in the eleventh and twelfth centuries as they solidified their power.

Although they held a strong position in Tuscany for more than 400 years, the major conflicts between factions loyal to the papacy and the Holy Roman Emperors (Guelfs and Ghibellines) ultimately led to the decline of Conti Guidi, especially following their loss to Florence in the battle of Campaldino in 1289 in the plains beneath the castle. This history was made all the more vivid by the manuscripts I had before me. 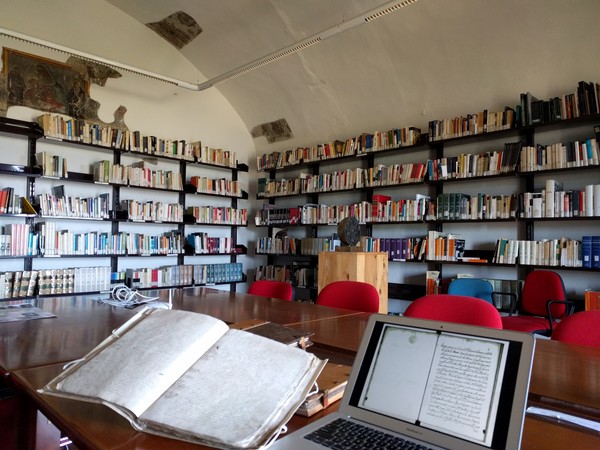 The first is a 12th century book of monastic rules, written in Latin in a fine medieval hand on animal skin parchment.  It originally belonged to a small monastery called Sant'Ellero di Galeata, and within its pages was included a calendar of feast days onto which the dates of death of the monks were recorded so that prayers could be made for them regularly.  Larger monasteries had entire books, called necrologies, where the names the deceased monks and the supporters of the monasteries would be written for this purpose, but in this case, the monks of Sant'Ellero included theirs within the guiding documents of the community: one book contained everything about the monastery.

What was even more striking was the connection between the monastery and the Conti Guidi: while the monastery had originally been in territory controlled by the family (and likely was a recipient of its donations and support), it was destroyed by an earthquake in 1279, a decade before the family's misfortunes following Campaldino.  And in yet another twist of historical fate,  I had seen parts of the monastery's church before: one column statue from the original church is in New York City at the Metropolitan Museum of Art!)

The second manuscript I was researching was from 1600 - almost modern (at least in the research I do).  It was the "Historical Memories of Poppi" written in Italian by Bernardo Lapini, a collection of anecdotes, summaries, etymologies, remembrances, and other historical tidbits from the origins of the city up to his own day.  It included the battle of Campaldino, notes about surrounding castles, and an account of the ravages of the plague.

In many ways, what Bernardo was doing in 1600 was an early version of my own kind of research - collecting and collating bits of historical information from a wide range of sources into something cohesive.  It also involves going to libraries and archives and searching through medieval charters and manuscripts looking for those bits, something we also shared in common.

This was clearest early in Bernardo's text, where he included an entire charter in Latin that had belonged to a nearby monastery in Poppi dating from 1017 (already old by the time Bernardo was reading it).

Although the collections of that monastery had long scattered, the very text the Bernardo read survives in Florence, in the State Archives, and was one that I had already studied!  Although he was working more than 400 years ago, Bernardo and I shared interests in medieval texts as windows to the past.

The next time, seeing the past in the bottoms of lakes: historians, geographers, geologists, archaeologists, and paleoecologists discuss human effects on ecology and landscapes.

[1] In the Biblioteca Rilli, I received gracious assistance from Alessia Busi, Roberto Salvi, and Roberto Municchi.