Artown Concert, "Songs From My Cuban Island" is a labor of love for assistant professor of voice, Olga Perez Flora.

Music reaches beyond borders and time. It connects families, communities and the world.

Cuban music takes it roots from Europe and Africa, but it also has greatly influenced the last century of artistic expression around the globe.

As a Cuban-American, I'm proud to share my cultural songs with the Artown audience on July 13 with "Canciones de mi Isla: Songs from my Cuban Island." The University of Nevada, Reno is a sponsor of Artown.

The evening concert will walk the audience from the beginning of Cuban song to its most contemporary composer, José Maria Vitier. I hope that the community gets a deeper sense of Cuban song and how it has developed over time. The concert explores classical and contemporary themes alike. It ends with a fun set of Ernesto Lecuona songs that were instant classics such as "Siboney" and "Malagueña."

Cuban music is considered quite young with respect to music's beginnings. Its roots take hold in the Afro-Cuban rhythms. It is influenced by the Spanish, when they colonized the island in the early 16th century. Later the West African slaves, brought over to work the sugar plantations, helped evolve the rhythm and percussion of modern Cuban music. Ignacio Cervantes is considered the "Abuelo of Cuban Music" with his classical themes jiving with Afro-Cuban rhythms. Cuban song took hold quickly, based on folk tunes that people sang around town, and Lecuona became a popular song writer, having composed more than 400 songs.

Cuban music is a daily part of the culture. Walking around little Havana, you will hear music wafting out of windows, store fronts and from the mouths of babes. It is built into the walk, the church life and the holidays ... it's pervasive, in a good way.

My parents both immigrated to the United States as early teenagers along with the rest of their immediate families, so the Cuban influence on my life has been profound. We spoke Spanish at home and exclusively with my grandparents, ate Cuban food regularly (lots of black beans and rice with plantains).

What I remember most are the holidays, which revolved around eating Cuban food and then, moving the furniture to dance with my maternal grandparents "showing us how it's done!"

I now see how it has influenced my career as a mezzo-soprano. Listening to complex rhythms and feeling them in my body helped me develop an innate sense of rhythm as a young singer. I was always able to feel the shift in the rhythms in my body and voice because I was raised in a culture that instinctively integrates those rhythms into everyday life. There was a lot of dancing in the kitchen or singing loudly in the car. When you do that every day as a child, you come back to it easily as an adult.

This Artown concert is a labor of love for me. My grandparents were everything to me growing up, and they helped to shape and influence my life. I am proud to stand on their broad shoulders, shoulders of a people who envisioned a better life and came to this country to seek it out for them and for their families.

I am so proud of them, and I hope that this concert honors their memory and continues to inspire more Latinos to go out into their community and share the joy of this invigorating culture. 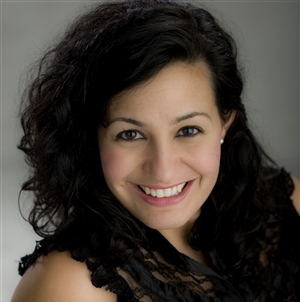