Fate, luck and decision: A new college president reflects on her important time at the University

At age 22 and arriving in northern Nevada in a 1968 Volkswagen van called "Hektor," Lynn Morton had no idea it was the first step of many that would lead her to a college presidency.

(Editor's note: Lynn Moorhead Morton is the recently appointed president of Warren Wilson College in Asheville, N.C., and a 1984 graduate of the University (M.A. British Literature). She earned her Ph.D. in Renaissance and Medieval Literature from the University of South Carolina in 1993 and served Queens University of Charlotte as faculty, associate vice president for academic affairs, dean of the college of arts & sciences, and provost prior to her appointment as president at Warren Wilson College. She took office on July 1.)

In my on-campus interview for the presidency at Warren Wilson College last spring, I was asked to speak on the interplay between fate, luck and decision in the surprising ways in which one's life plays out.

There was a reference to the film "La La Land" in the prompt, but I was one of about 10 Americans who had not seen the movie. My thoughts immediately went to one of the most uninformed, random, reckless and meaningful decisions of my life - to move to Nevada shortly after my graduation from college and marriage.

In January 1981, at age 22, I climbed into a raggedy, orange 1968 Volkswagen van (that we named Hektor, from "The Iliad") with my husband of 18 months and set out for Nevada from our home in North Carolina. We had roughly $2,500 and a plan that he would find a job making use of his undergraduate degree in geology from Guilford College in Greensboro, N.C. I had a plan to enjoy the scenery on the way.

Arriving in Reno two weeks later was like landing on the moon for these native North Carolinians, a moon-lit 24 hours a day by artificial light downtown and the brightest real moonlight I have ever seen in the desert. I was breathless with the beauty, expanse and contrasts of the desert.

After working rather listlessly and ineffectively at the Reno Gazette in advertising layout, I decided to go to graduate school at the University of Nevada, Reno in English. Mind you, I still had no plan. I just wanted to go back to school, which I loved doing. The University gave me my first real teaching job as a composition instructor, and I herewith apologize to any students who were in my composition class from 1981-84. I was in my early 20s and did not know what I did not know - a bad combination.

But the professors who oversaw my teaching were patient and kind, and although I might not have been much good at it, I loved it. I focused my academic attention on pre-1660 British literature. I applied for an open full-time teaching position in the English department after earning the M.A. but did not get it (go figure - they wanted somebody good), and that fortunate rejection led to a two-year stint teaching high school in Zephyr Cove, where I got a bit better at teaching and a whole lot better at empathy, patience and courage.

We were in Nevada for seven years and had a daughter there, who learned to, in her words, "walk in the bushes" (desert) as a toddler and appreciate the smell of sage after the rain, get thrown into deep snowdrifts in winter and disappear completely without panicking (that really happened), cross country ski on cute little toddler skis (that she despised), and grow accustomed to no humidity and no flying bugs to speak of. She grew bold and sassy, a Nevada girl. She still is.

As for me, I grew up. I arrived in Nevada a grown child, and I left a grown woman. My love of literature was fostered by my excellent professors in the English department (thank you, Dr. Phil Boardman), and I had academic experiences I never would have had, such as being taught Old Norse during the summer by Dr. Diamond, a renowned scholar sojourning in Nevada for relief of various allergies. I arrived directionless; I left with a clear internal mandate - to earn my Ph.D. and make teaching my life.  And that is what I did.

Along the way we had two more children, southern boys, courageous and kind. Our bold and sassy Nevada girl learned to get used to bugs and humidity, and now she puts her formative experiences to good use working in Washington, D.C.

My life as a Nevadan cultivated in me a certain fearlessness, independence beyond my wildest dreams, a strong work ethic, appreciation for the land and sky, and the ability to leap into the next adventure knowing I can land on my feet if I watch where I'm going. Not to mention the lessening of my southern accent and the broadening of my appreciation for other cultures than the one I grew up in.

I write to express my appreciation to the University of Nevada, Reno for setting me on the right path, which has led to this moment of intersection between fate, luck and decision - a college presidency. 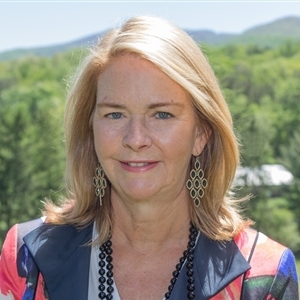