Placing the Zika virus in a broader perspective

As you all have no doubt seen in the media, we have yet another exotic public health threat on the radar: Zika virus.  While the vast majority of people infected either experience minimal symptoms, many develop dengue-like symptoms of rash, fever, and joint pain.  Worse, pregnant women who are infected are experiencing between an 18-50 percent rate of birth defects known as microencephaly ("small fetal head").  Microencephaly may lead to a child with neurological issues such as cerebral palsy.  We have also noted paralysis (Guillain Barre Syndrome) in a limited group of 20- to 30-year-old adults, where the case fatality in this group is as high as 50 percent.

Zika virus is a national security issue because in Brazil we estimate as many as 1.3 million infected, with 3,500 cases of microencephaly.  At one single hospital, they reported nearly 100 cases of paralysis in adults, of whom half died.  There is no vaccine or anti-viral medication.  Zika has spread explosively in the tropical belt of the Americas, and now the expected media hyperbole has arrived.

It is believed that Zika virus is transmitted in a primate-mosquito cycle similar to dengue virus.  However, we are not 100 percent sure of this, and we have called for studies to examine whether this virus is capable of infecting birds.  Our threat assessment for the nation will be dramatically different if the virus spreads in a similar manner as West Nile versus dengue.  West Nile is ecologically established, with locally acquired cases reported here in the United States every year.  Dengue, on the other hand, does NOT transmit locally but in occasional circumstances and in very focal areas of California, Texas, and Florida.  But many cases are imported yearly.

The World Health Organization (WHO) has drawn comparisons between the current Zika crisis and the Ebola disaster.  The two situations could not be more dissimilar.  Ebola was associated with an approximate 70 percent case fatality rate and 15,216 confirmed cases as of Jan. 20 for all of West Africa.  Recall there was great concern at the time of virus mutation leading to a more transmissible form of Ebola.  It turns out this was not the case.  And CDC's forecasts of more than a million cases in West Africa were not realized.

Zika virus infection estimates so far are as high as 2 million cases across 18 tropical American countries, with more than 3,500 birth defects documented.  Fatalities have been rarely reported among patients with sickle cell disease.  It should be emphasized that Zika was not the only Africa-origin exotic virus to recently be introduced to tropical America: Chikungunya was also introduced two years ago and spread rapidly as well.  The difference is the impact: Zika has been associated with birth defects.  So, to compare Ebola and Zika is truly not appropriate: it is apples and mangoes.

Many in the global public health community have embraced a public communications tactic of frightening politicians to action.  It is unfortunate the community feels the need to take this path.  However, repeated hyperbole associated with public communication has badly eroded credibility of the entire global public health enterprise.  Careful balancing of what is/is not known in context that avoids hyperbole is recommended.  That said, WHO is under heavy fire right now due to the perception they are again slow to respond.

Our bottom line assessment is this: Zika virus will cause great disruption in the tropical belt of the Americas.  We will see imported cases of Zika to the U.S. in multiple states, including Nevada.  It is highly UNLIKELY to see sustained epidemic transmission of Zika in the U.S.  Here in Nevada we do not have the appropriate mosquito species to support transmission.  We are advising all men and women of child-bearing age to avoid unnecessary travel to the tropical Americas until herd immunity has been established given the significant risk to the unborn.  The key tool for our clinicians in the state of Nevada is access to laboratory testing.  And our State Public Health Laboratory will soon have this test available.

James Wilson, M.D., is an associate research professor in the School of Community Health Sciences and is director of the Nevada Center for Infectious Disease Forecasting. Dr. Wilson is considered one of the world's leading disease forecasting experts. 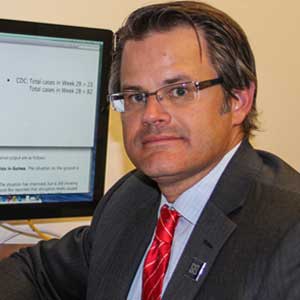