Eroding rocks can put carbon dioxide into the atmosphere. What does that mean for the climate? 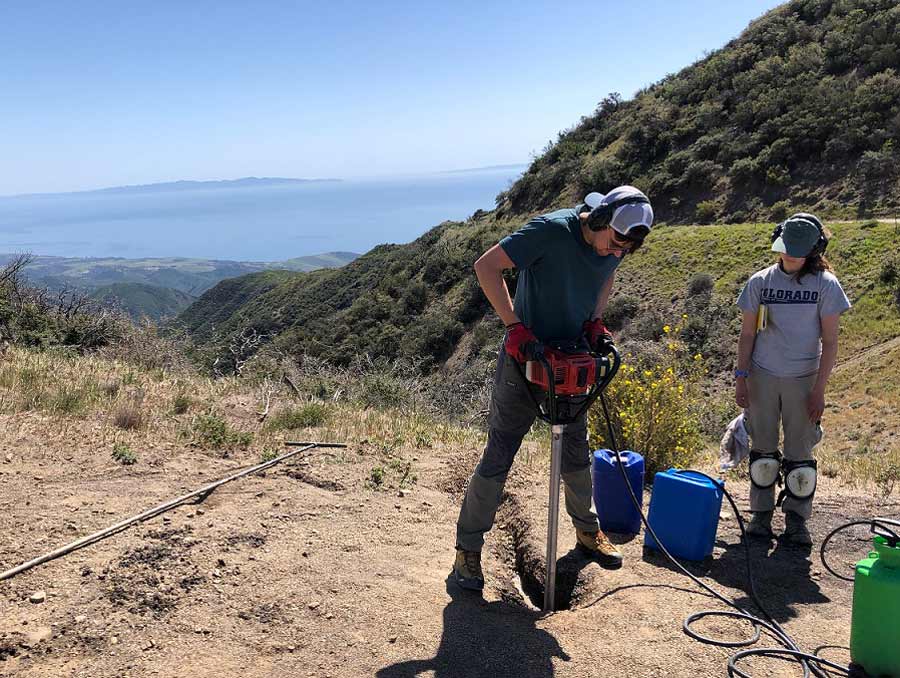 Eroding rocks can put carbon dioxide into the atmosphere. What does that mean for the climate?

Researchers in the Department of Geological Sciences and Engineering are exploring how rock erosion contributes to the carbon cycle by studying shale in the mountains of southern California. But as assistant professor Joel Scheingross points out, that doesn’t mean anybody should stop rock erosion in an effort to combat climate change.

“This isn’t something new, this isn’t something that’s necessarily bad,” Scheingross said. The research he and Mara Nutt, a graduate student in geology, are doing might affect the climate over million year timescales. “It’s so small compared to other sources.”

Nutt is interested in understanding how the erosion of shale contributes to natural variations in Earth’s climate, which is the focus of Nutt’s dissertation. Shale is a specific kind of sedimentary rock.

“Sedimentary rocks are rocks that are formed by the erosion and deposition of other rocks and organic matter, in this sense, they’re rocks that have been recycled,” Scheingross said. Shales form when layers of fine sediment, often eroded from mountains, are deposited at the bottom of oceans and lakes. Vegetation, microscopic marine organisms and other forms of organic matter can be deposited and mixed in with the sediment. When this material gets buried, it can transform from a gooey mud into a solid rock, trapping the organic matter and the carbon contained within in it, in the rock.

“It’s a natural method of geologic sequestration of carbon,” Scheingross said. “You’ve taken carbon from the atmosphere, incorporated it into some living organism, and then buried and trapped it in rock.” This is the same process that makes oil and natural gas, and shales are often mined for these resources, Nutt added.

Millions of years later, tectonics may have shifted the sedimentary rocks so that they are exposed on the Earth’s surface, rather than buried in the ocean. When the exposed shale interacts with oxygen in the atmosphere, the carbon can be oxidized, forming CO2 which then enters the atmosphere.

Scheingross said the release of carbon to the atmosphere by humans occurs on a much larger scale.

“Burning gasoline in our cars or using natural gas for electricity is not that different than shale weathering. In both cases, carbon that was trapped in sedimentary rocks is released to the atmosphere, resulting in a net CO2 release.  The main difference is that humans are actively mining oil and natural gas, and then burning these materials, resulting in much greater CO2 releases than can occur naturally from weathering of shales.”

But how much CO2 enters the atmosphere because of shale weathering depends on a number of things, and the oxidation process takes time. This is where Nutt’s research comes in.

The rate of shale erosion is important to understand, because this controls how much shale is exposed on the Earth’s surface and is in contact with the atmosphere. Nutt hypothesizes that how quickly shale weathers and how much CO2 gets released to the atmosphere is directly related to the rate of erosion.

“The longer the rock is sitting there and being chewed up by nature and oxygen, the more CO2 can be created from the organic content that’s in the shale,” Nutt said. But there’s a sweet spot to maximum carbon dioxide output.

The shale needs to have some exposure to the atmosphere for the carbon to be oxidized, but if it happens too quickly, much of the carbon is “missed” by the atmospheric oxygen and is instead eroded away and may be transported back to an ocean basin before all the carbon is oxidized.

The Santa Ynez Mountains in southern California are a great spot for the researchers to learn from, because the range has consistent exposure of the same shale unit, the range is a small area so there aren’t large variations in temperature and there is a documented gradient in erosion rate allowing the researchers to test their hypothesis. There are very few study sites around the world that meet all these characteristics, and the location couldn’t be much more convenient to the researchers.

Nutt and Scheingross plan to take their science into the community at the Sierra Nevada Journeys Family STEM Nights. Local families are invited to a school with scientific demonstrations, similar to a science fair. Nutt and Scheingross are working on developing a weathering demonstration. They will explore how different aged children interact with the demonstrations and design age-appropriate classroom visits. They’ll bring a couple of NevadaTeach students from the Scheingross lab along into the classrooms, where they will have an opportunity to practice their science communication skills.

In the meantime, they will be visiting the Santa Ynez Mountains and learning more about how the weathering of shale fits into the larger picture of the Earth’s carbon cycle.