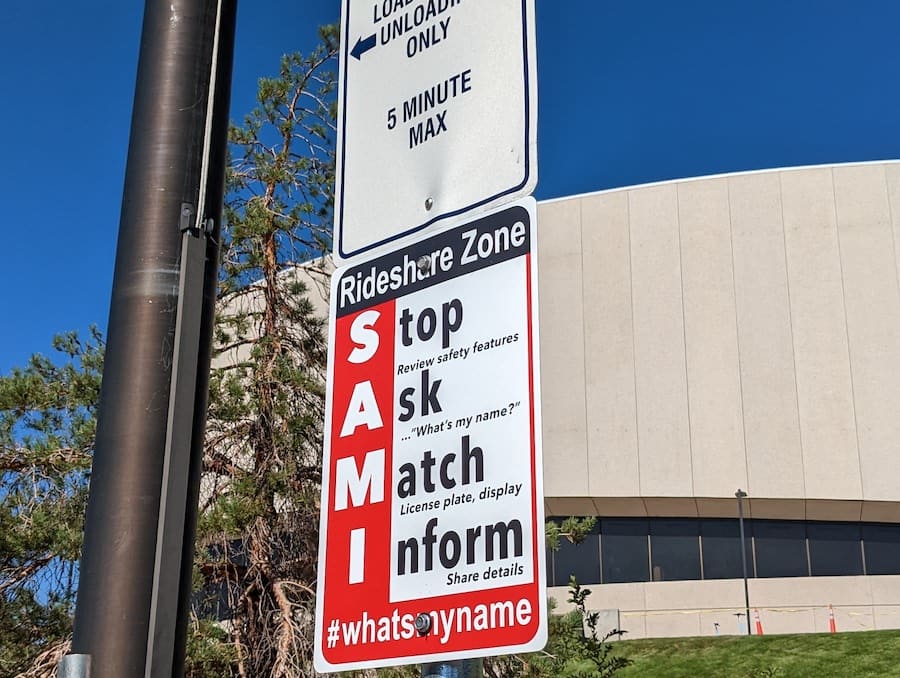 ‘Rideshare Zone’ signs have begun popping up around campus lately, have you wondered why? University of Nevada, Reno Police Department (UNRPD) Specialist of Community Relations and Support Services Madison Weeks discusses the purpose behind the signs as well as what UNRPD has planned to help educate students on keeping themselves safe when using rideshares.

“In 2019, in southern South Carolina there was a student who went out with her friends and by the end of the night she got into a car that was posing as an Uber. She was kidnapped and murdered. Her name was Samantha Josephson and her family began this foundation called the #Whatsmyname Foundation,” Weeks said.

The #Whatsmyname Foundation, created by Josephson’s family, has been on a mission to educate others, particularly college students, about how to safely interact with rideshares and how to spot danger.

“The program encourages college students in particular, but also the general public, on rideshare safety tips and how to, hopefully, never put yourself in that situation, but understand the risks you take when you do use rideshare services,” Weeks said.

Weeks attended a conference this past summer where the foundation was presenting and she was able to return to campus with ‘Rideshare Zone’ signs. Four signs have been placed around UNR’s campus in the hopes that rideshare drivers will catch on to the “designated” stops placed at higher traffic areas around UNR’s campus. Signs have also been distributed on TMCC’s campus and also around the Carson City area.

“I asked parking services where the most popular pickup areas are throughout campus. We chose one on the north end of campus near the roundabout next to the Medical School. That has a high traffic area, especially with vaccine clinics and things like that,” Weeks said. “Then, the loading zone in front of Lawlor Events Center, which is close to the bars and restaurants that are across the street. It’s a nice area to have them up there as a reminder for students. Another sign went up in front of Nye and Canada Halls, so in the residential area of campus. Finally, a sign went up in the parking lot in front of Clark Administration, just for people coming by visiting administration in the South area of campus.”

Weeks and the UNRPD are hoping to host tabling events at each of these ‘Rideshare Zones’ to provide information about each of the stops as well as teaching students to become more aware of their surroundings in regards to rideshare safety. The signs feature the acronym ‘SAMI,’ short for Samantha Josephson and stands for: Stop, Ask, Match and Inform.

“We'll cover many safety concerns during the event: If you are in a car, how do you get out of it, how do you check before you take off? When the doors lock, make sure the child lock is off. Things like that. So, the little things. We're just trying to encourage everyone to keep safety in mind. We don’t want to discourage anyone from taking rideshare services, but we want people to be aware,” Weeks said.