A historic moment for University of Nevada, Reno dancers 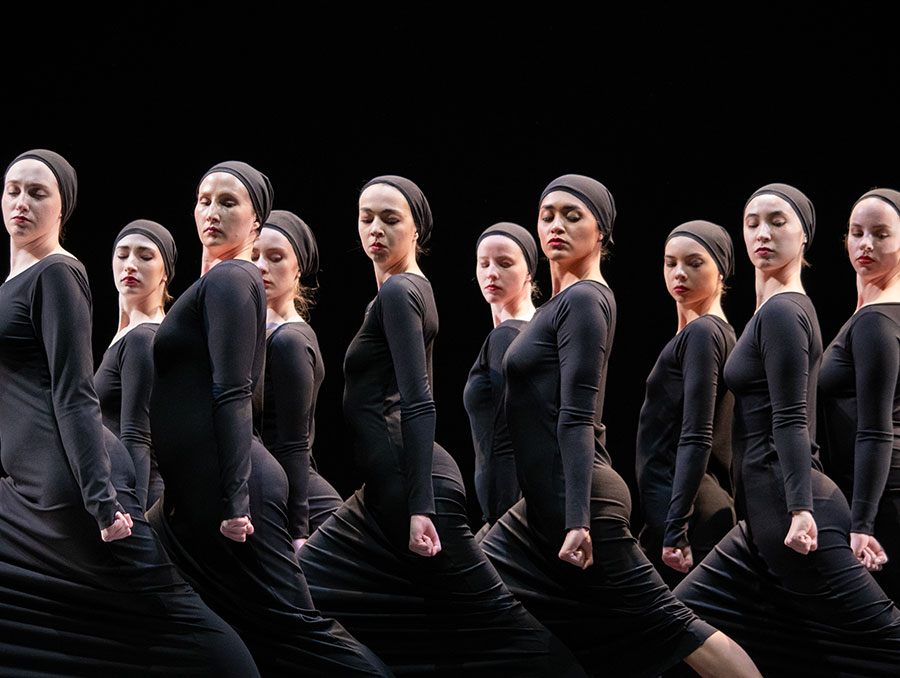 A historic moment for University of Nevada, Reno dancers

A grim group of women in black stand in a semi-circle, while a woman in white, the heretic, stands away from them, looking dejected. The heretic, starts pleading with them, going around them with her hands stretched. The women in black are rigid and relentless and are united against the heretic. They ignore her, move about with their heels crashing down in a sinister rhythm. The heretic continues to plead against the resounding notes of the piano in the background. The women in black, in the end, lean in toward the heretic aggressively, ostracizing her with a fierce hatred.

This, in essence, is “Heretic,” a powerful modernist masterpiece choreographed by Martha Graham in 1929. Ninety-three years later, it is still regarded as one of the best dance routines of all time and has been performed many times over the decades. On March 8, 2022, the dancers from the Department of Theatre and Dance in the School of the Arts at the University of Nevada, Reno opened for the Martha Graham Dance Company with “Heretic” at the Pioneer Center for the Performing Arts in Reno, Nevada.

About the Martha Graham Dance Company

“The Martha Graham Dance Company is one of the oldest and most prestigious dance companies in the United States, and having the opportunity to work with this company and to perform one of Martha Graham’s earliest, iconic dance numbers, ‘Heretic,’ was a huge honor and a special experience for our students,” Debra Moddelmog, dean of the College of Liberal Arts said.

The complete Martha Graham Dance Company repertoire has never performed in the state of Nevada until this spring. Returning to the stage after a long hiatus of 19 months, the incomparable dance company needed a strong opening for their 96th season. The dancers from the Department of Theatre and Dance were fully equipped for a challenge of this magnitude.

“Doing seven hours of school and then going to a three or four-hour rehearsal, and doing that day after day can get challenging,” said Jenna Emmons, a pre-nursing major and dance minor who was part of the core group of women in black. “Besides, I had three tests the week of the rehearsal.”

“During those two weeks of rehearsing and learning a new style, it was very hard but enjoyable at the same time,” said Halie Landers, a dance major who played the lead-role as the heretic. “I found it a bit challenging to learn the new material since it was a very precise technique.”

The students are not new to performing on a stage. However, performing for a large audience of over 1,000 people was certainly a new experience for them. Practicing day after day, doing the same routine over and over again, and perfecting every movement (and stillness) were indispensable.

“Heretic” may look simple to the untrained eye, but it is a very physically demanding routine. It involves a lot of contractions of the muscles, a lot of keeping your body still for longer moments of time. The leans, the taut twists, turns and stillness performed by the dancers take a tremendous amount of practice. Making sure everyone is in sync with each other takes time to master.

“It took a while to get the hang of the movements,” Emmons said. “The Graham technique itself is extremely demanding and can take years to perfect. We only got a little taste of it. The Graham technique not only requires poise and performance but takes extreme strength in the core, legs, arms and every muscle of the body. I remember being extremely sore throughout this whole process.”

Based on contraction (a forward curve of the spine starting from the pelvic region) and release, using different parts of the body in opposite ways, the Graham technique is known for its precision and strength. Every movement is specific and pinpointed, marking the routine demanding both physically and emotionally.

“It’s a style that I personally didn’t do on a daily basis and it was very exciting for me. Also, very strenuous,” Landers said.

The experience pushed the students to their mental and physical limits, considering they already had busy schedules with their school work.

“It was an experience I will never forget,” Emmons said. “I learned new ways to move and had a wonderful group of dancers to dance with. Moreover, performing at the Pioneer Center was so much fun. I’m truly glad I had the chance to be a part of this. Not many people can say that they opened for the Martha Graham Dance Company.”

Expressing similar opinion, Landers added, “This was the most amazing experience in our dance careers. It was an honor to have performed for a prestigious company.”

“They performed this piece beautifully for an audience of over 1,000 people at the historic Pioneer Center for the Performing Arts,” Moddelmog said. “It was a reputation-building residency for both our dance students and our dance program, and we are grateful to Beth Macmillan and Artown for collaborating with us on this incredible opportunity.”

The students will perform “Heretic” again during the Spring Dance Concert featuring the Rosie Herrera Dance Company on April 21 - 23 at 7:30 p.m., and on April 23 at 1:30 p.m. at the Redfield Proscenium Theatre inside the Church Fine Arts building on campus. Tickets can be purchased online for in-person or livestreaming.