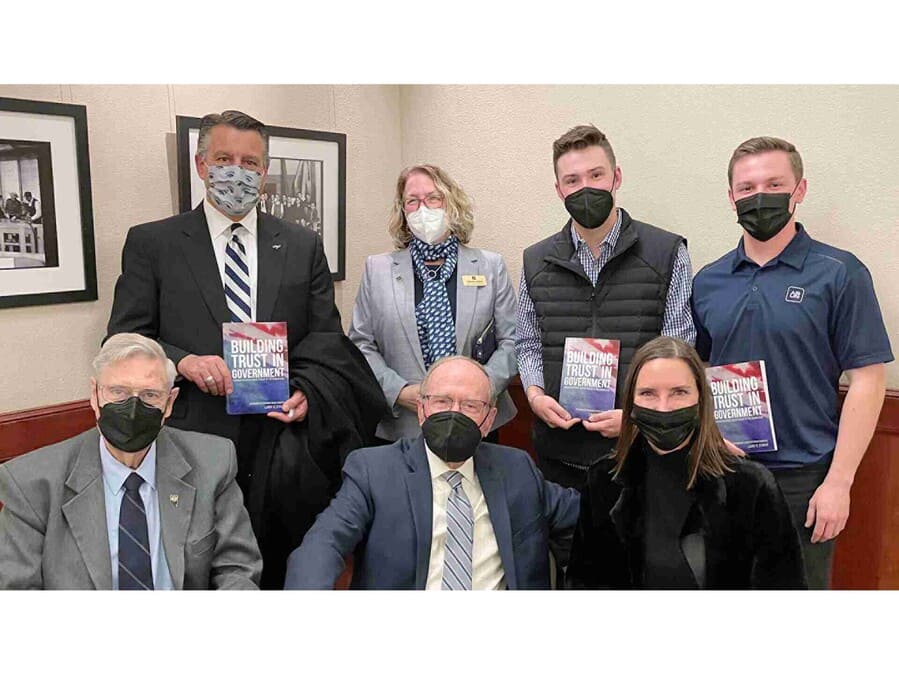 Trust is defined as the “firm belief in the reliability, truth, ability, or strength of someone or something.” It is a necessary ingredient when building both personal and professional relationships. Trust between colleagues and constituents is also key for political figures interested in collaborating with individuals and groups found on opposite sides of the political aisle in order to advance agendas for the betterment of society.

In a time where having trust in elected officials is more important than ever, the University Libraries hosted an event to bring to light how trust and the art of governance can work together to inspire the next generation of public servants, validate the decision of those who chose to pursue public office as a career and preserve a lasting memory of important political accomplishments in Nevada history.

The event featured a book signing with Larry Struve, friend of the University Libraries and member of the University of Nevada, Reno Class of ’64, as well as a conversation with former Nevada Governors Richard Bryan and Brian Sandoval.

At the event, Struve moderated a discussion between the former Governors highlighting important takeaways from his new book, Building Trust in Government: Governor Richard H. Bryan’s Pursuit of the Common Good.

When asked what motivated him to write Building Trust in Government Struve quoted U. S. Supreme Court Justice Felix Frankfurter as one of the sources of his inspiration. Frankfurter served on the Supreme Court from 1939 – 1962.

Frankfurter said, “Government is itself an art, one of the subtlest of the arts. It is neither business, nor technology, nor applied science. It is the art of making men live together in peace and with reasonable happiness.”

“It seemed timely and relevant to start a dialogue that looked at past successes as a way to get back to the bipartisanship that made Governor Bryan and Governor Sandoval so successful,” Struve said.

“Both Governors were admired for their leadership skills, and exhibited a governing style that resulted in success in practicing the art of governance,” Struve said. “Others seeking high elective public office would do well to emulate the qualities that made these two Nevada Governors effective leaders if they too want to achieve success.”

Struve, himself, is no stranger to public service. Over the course of his career Struve served as Washoe County Deputy District Attorney, Chief Deputy Attorney General for the State of Nevada, and Director of the Nevada Department of Commerce as part Nevada Governor Richard Bryan’s cabinet.

The Libraries recorded the event. It is available for viewing by clicking the video player.

Practicing the art of governance

Some of the artful practices outlined in Building Trust include: honesty, respect for others, a good work ethic, a sense of humor, loyalty, disdain for extravagance, a positive attitude, gracefulness, promotion of the common good, and sincerity in how one deals with others.

“In my role as Director of the Nevada Department of Commerce, I was able to observe firsthand how Governor Bryan applied his talents and keen intellect to benefit the citizens of his state,” Struve said. “He approached governing not as a job but as an honor and an opportunity to serve all the citizens of Nevada - not just those who had voted for him.  He built a solid foundation on which future successes could be based.”

In the book, Struve mentions how, from an early age, Bryan wanted to go into politics.

Growing up in 1940s Las Vegas Bryan said he learned early on how to get along with all kinds of people.

“In my neighborhood, we had the doctor’s kids living next to the truck driver’s kids,” he said. “It was not unusual to see all different kinds of people living, working and playing in my neighborhood. I learned to respect other people, recognize their differences and the art of compromise very young.”

“I knew I wanted to go into politics since I was in the eighth grade,” he said.

Bryan studied at the University of Nevada, Reno, where he served in the student senate and was elected student body president for academic year 1958-59. He was active in many student organizations, worked on the Student Union Board, served as sports editor for the university’s yearbook, Artemesia, and competed as a member of the intercollegiate debate team. Bryan earned a pre-legal bachelor’s degree with a concentration in history and political science in 1959.

Governor Sandoval also credited his humble upbringing in Fallon and Sparks, Nev. as one of the reasons he was able to achieve success in office.

“For me, it started at home,” Sandoval said. “I was taught to be self-sufficient and how to get along with other people at a young age.  It never occurred to me, that when I was cleaning sheep pens in rural Nevada that someday I’d hold the position of Governor! I had the family support I needed and had many wonderful mentors who helped shape me and show me the ropes of what it took to lead while in public office.”

Both Governors were involved in student government at different stages of their educational careers, and while attending the University of Nevada, Reno.

From student government to the Governor’s Office

During the event Bryan, Sandoval and Struve spoke about how their roles within the University’s student government served as a virtual internship which helped inform each of their future careers in public office.

“Serving in student government is a good training ground for those wanting to pursue public office,” Struve said. “As a student I would have never imagined that I would eventually become the Director of the Department Commerce within Governor Bryan’s cabinet.”

Each of the men shared how the student government experience helped them learned to communicate with different people and groups.

“Building trust by being honest with people, being transparent and willing to compromise were key attributes to be learned, ” Sandoval said. “I also had the opportunity to intern for Senator Paul Laxalt in Washington, D.C. while in college. That experience changed my life! Watching the Senator work was a true gift.”

“It was a formative experience for me, “ Sandoval said. “I saw each of these talented men work hard, do all of their homework and make connections across the aisle to get things done for the citizens of the state.”

Inspiring the next generation of leaders

“I left with a renewed sense of purpose,” Brown said. “I want to be a part of the solution, work even harder and do even more.”

Brown said he was motivated to serve the campus community after completing an internship with ASUN’s Chief Justice his freshman year.

“The student government internship opened up a world of possibilities for me,” Brown said. “I knew I wanted to develop my skills further, serve people and help create progress for students, faculty and staff.”

During his sophomore year Brown served as Chief of Staff, working closely with the ASUN President and Vice President. It was in this role he felt he could take on either the President or Vice President role himself.

“I ran for Vice President my junior year and I got it!” Brown said. “The students had elected me! From there I met Keegan, we worked well together and decided to run for the President and Vice President positions for the 2021-2022 academic year.”

ASUN Vice President Keegan Murphy said he hopes to be half as impactful as Governors Bryan and Sandoval.

“The Building Trust event helped humanize the politician,” Murphy said. “They go through things, deal with people and families, but work toward the common good to improve society. One person truly can make a difference.”

More than one-hundred attendees participated in the Building Trust event online and in-person inside the Wells Fargo Auditorium at the Mathewson-IGT Knowledge Center.

The Special Collections and University Archives (SCUA) Department, part of the University Libraries, is one of the repositories maintaining Nevada’s political history. Alan Bible, William J. Raggio, Paul Laxalt, Patricia Cafferata and Harry Reid are just a few of the names found the in the Nevada Political Archive. The Archive exists to collect, organize, maintain, and provide access to the personal papers of elected officials at all levels, as well as records of advocacy groups, social activists, labor unions, and other organizations. It is an essential primary resource for those interested in learning about the political life of Nevada and how public policy is created at the local, regional, and national levels. The Archive is managed by SCUA and is open to students, faculty, researchers, and the public.

“Political collections like these are not simply valuable primary sources, they are the stories of dedicated public servants championing the issues of their time,” Dean of University Libraries Catherine Cardwell said.

“The university is fortunate to have a Special Collections department serving as the entry point for the discovery and creation of new knowledge,” Cardwell said.

SCUA is currently processing the extensive personal papers of former U.S. Representative Barbara Vucanovich papers thanks to generous gifts from the Cafferata family and friends.  Additionally, the Libraries will host an event in early March highlighting the environmental legacy of Harry Reid on Nevada. Harry Reid Fellow Christian Filbrun will give a talk reflecting on Reid's long political career, one that helped create Nevada's first national park, Great Basin National Park, resource management and allocation of the Truckee River, established collaboration and funding for the protection of Lake Tahoe, and blocked the storage of high-level nuclear waste at Yucca Mountain.  During this presentation, Filbrun will share images from the Harry Reid Collection which is not yet open to the general public.

About Special Collections and University Archives

Special Collections and University Archives (SCUA), a department within the University Libraries organization is located on the third floor of the Mathewson-IGT Knowledge Center. SCUA stewards unique, rare, and historically significant resources in a variety of formats documenting the northwestern Great Basin and the University of Nevada, Reno. Its mission is to help people craft new understanding and experiences through research, teaching, and learning by collecting and expertly caring for northern Nevada's unique, historically significant materials. SCUA is open to everyone.