Who is that doggie in the photo? A personal exploration 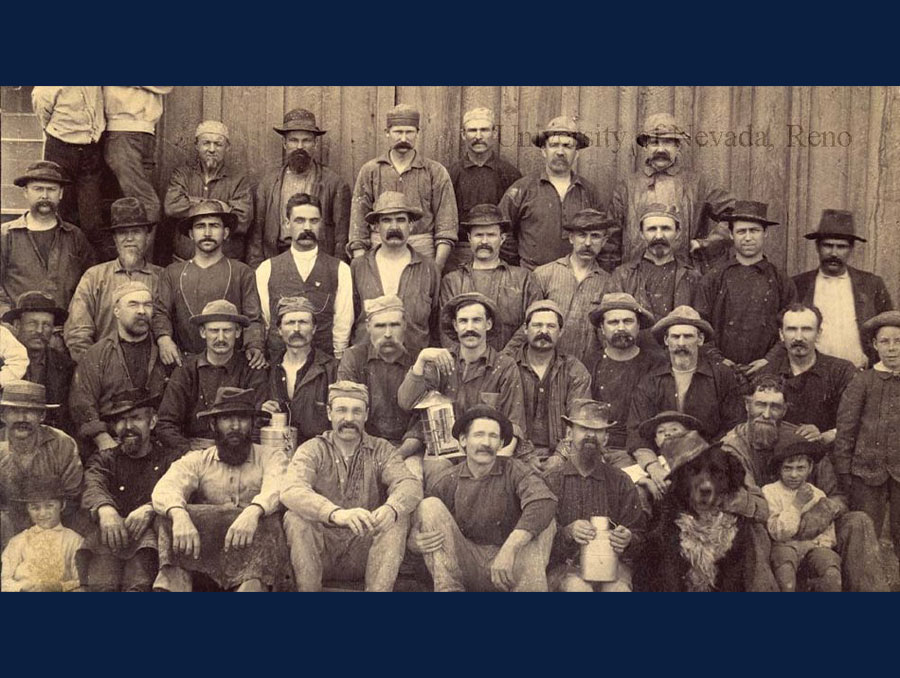 Who is that doggie in the photo? A personal exploration

During my time in the Special Collections and University Archives Department, I’ve had the privilege and the responsibility of putting together or assisting with exhibits for our department. Exhibits are a way of showing our users and our community the materials we have on a specific topic or theme. Each exhibit area often tells its own story about Nevada’s history or culture. We use items as appropriate for that theme which come from all of our collecting areas: manuscript collections, books, photographs, maps, drawings, publications and the like. By using these different materials we can tell a more complete story to those viewing the display, as well as demonstrate the types of materials we have which can be used by anyone interested.

We aren’t able to be as comprehensive as we often would like for some exhibits because we rely on the materials which we collect from those donating their personal or family papers, or records from organizations or businesses. Materials can be incomplete due to not being saved over the years. For example, people move or family members die and materials get thrown out. Disasters happen which ruin papers and photographs. Items saved come from different generations and memories about the details are gone by the time they are donated to us.

This fact is especially true when reviewing photographs. We receive a lot of photographs that have little or no identifications about them. That’s very frustrating as we want to be as accurate as possible with our information. Sometimes we can use the collateral materials which might come in with the photos to see what we can find out, but often the photos come in by themselves. It is up to us to try to figure out who the people are, what is the event, who snapped the photo, and when was the photo taken. One plus is if the image was taken by a professional photographer as the photo can be marked with that person’s name somewhere. That can be a start!

The mining exhibit currently on view in the Knowledge Center includes a very large reproduction photograph of miners from the Gould and Curry Mining Company posing for a group photo. What can this photograph tell us? The four rows of miners are most likely preparing to go down into the mines for their shift but were halted to commemorate their work by the photographer. The photographer has placed them closely together to fit them all in as best as possible. There are 33 men who are either sitting on the ground in the first row, sitting in the second row, and standing in the 3rd and 4th rows. Some of the men have their lunch pails and one has a lantern he will take underground with him. Most of the men are dressed for their dirty work with one or a second shirt layered on. They wear different types of hats covering each head, some with brims, others more like a cap, except for a man in the 3rd row who does not wear a hat. He sports a white shirt and vest upon which you can see a watch chain. He is not dressed to go underground so probably works in the office. As was the custom during the late 1800s, the men all sport either mustaches or beards.

There are some hangers-on among the rows of men. We can see parts of two people standing at the back row’s left. Are they more of the shift’s workers that didn’t get there on time and just decided to get into the photo at the last minute? Perhaps rowdy teenage boys crashing the shot? Some of the men have children with them. There’s a girl in the front row on the left, wearing a frilly blouse, and three boys on the right in the first and second rows, sitting or standing near whom we presume are their fathers. And near the boys in that front row is a large black dog with a white chest wearing a hat! The hat probably has been placed there by the smiling man whose hat is missing, holding the boy in the front row.

The image was taken by James H. Crockwell probably in about 1888 or 1889. Crockwell had a photographic studio on C Street in Virginia City during those years. He traveled throughout Nevada and also in Utah taking photos of mining camps. He closed his Virginia City studio in 1889 after his daughter died in a studio fire. While he had worked with other photographers in both Nevada and Utah during the 1880s, after that tragedy he moved and set up another studio in Salt Lake City. He became the official Utah photographer at the 1893 Chicago World’s Fair. Born in Iowa in 1855, he retired from photography in 1900, and died in Alameda, California in 1933.

The photo probably was not a spur of the moment image Crockwell took. He needed to arrange with the mining company’s superintendent about having the workers available for the group shot, and that information needed to be given to the men about the day and time the photo would be done. Knowing that information may have given some of the men, or their wives, the idea to bring along their children. But who brought the dog?

This image is one of my favorite shots because there’s humor in the image. I appreciate the man who anointed the animal with his hat. Crockwell allowed the dog to remain in the photo, becoming part of the community he was documenting. Having a dog wearing a hat in the group gives the photo a certain lightness, some level of humanity in contrast with the dangerous underground work the men shortly would take on for their employer. But I often wonder about that dog. Was he one of the worker’s dog? Was he just wandering past on the grounds of the mining company and followed the workers? Or did the dog belong to our photographer James Crockwell?

It’s not unusual to see dogs included in these photos from around this same time. Indeed, dogs have been part of our lives for centuries ever since they were domesticated. People have had a strong bond with their dogs because of their loyalty as well as their ability to guard and serve as hunters. Many dogs came West in wagon trains during the rush to California and after on the train. Who could leave their family pet behind?

One pair of photographs leads me to believe that another photographer was accompanied by his dog on his photographic travels. Romanzo E. (R. E.) Wood was a traveling photographer who took landscape images with his stereo camera. Based in California, he took images around Marysville and Tahoe and the surrounding region from 1875 to about 1905.  In his stereograph series “Views of Lake Tahoe and Vicinity” there are two views that show the same black dog in the foreground. In his “Boom of Logs” photo, logs are being towed by a steamer near Lake Tahoe’s edge.  A black dog lies with his back to the camera at the shoreline. In “Scenes at Tallac--Yanks--No. 3,” that black dog is again in the foreground. Another woman sits with her back against a tree with a dog sitting next to her and two men stand in the background among the trees. Thanks to the digital work of the staff at the Merriam Library, California State University, Chico, where there is the R. E. Wood Collection placed online, we know that the photo was taken in Pacific Grove, and we know the name of the dog! Their copy of this same image is annotated by Wood which says: “Old Bate Noir, the dog Cleo [Wood’s daughter] named, is in the front and he’s a good dog!!”

James Crockwell took another photograph at the Gould and Curry Mine of another shift of workers. We don’t know if it’s a later shift that same day or not but it has a different feeling, more formal perhaps. This time there are 42 men in the group. They still sport mustaches and beards. They wear hats and caps. More of the men have their lunch or dinner pails in hand and one holds a lantern. One man, probably from the mining office, is dressed in his suit and vest in the upper right row.  But there are no children present. The only dog you can see is the head of one sleeping who’s lying down at the edge of the photo next to the man on the far right in the first row. It is not the same hat-wearing dog we saw before.

James Crockwell took group photographs of miners at other companies in the Comstock. The photographs show men similarly decked out in their work clothes, many with their pails and lanterns, most with hats and caps, and a lot of facial hair. Only the one of the early shift at the Chollar Mine again includes children. But none of them include another dog, hat-wearing or otherwise. I’m sorry not to meet up with that good-natured dog again.