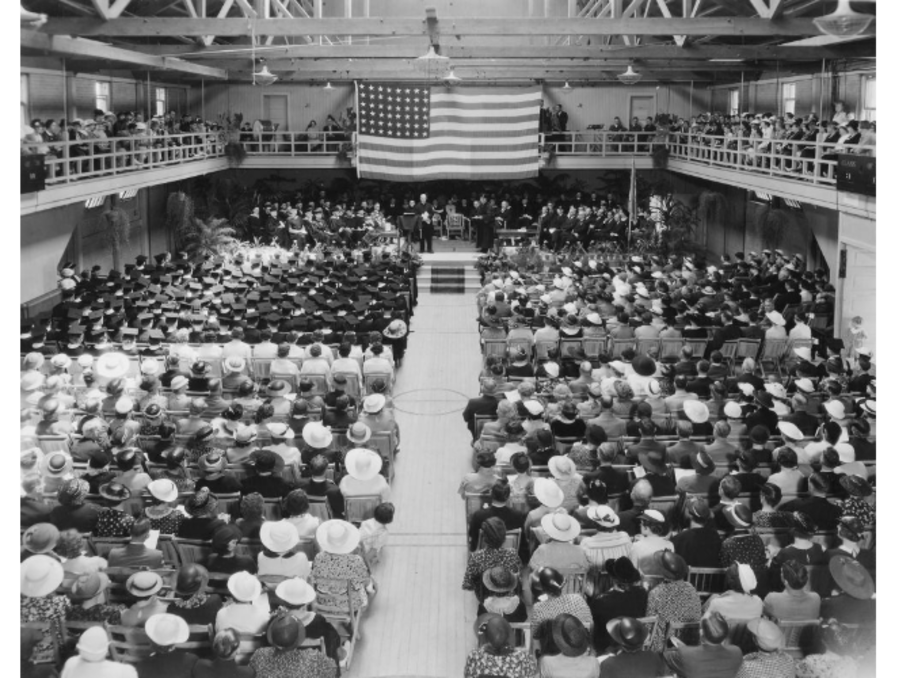 When Fredrick A. Bristol, Frank H. Norcross and Henry C. Cutting received the first three Liberal Arts degrees ever presented by the University, it was in an unlikely location, particularly for those who over the past 50 years who have received their degrees on the University’s historic Quadrangle.

During the evening of Thursday, June 11, 1891, Bristol, Norcross and Cutting were presented their degrees at McKissick Opera House in downtown Reno. Opened in 1888 and located at Plaza and Sierra Streets, McKissick’s offered thick red carpet, upholstered seats and pine and redwood facing on the balcony boxes.

“As these are the first to receive degrees from the Nevada State University … the young men will be looked at with critical eyes and expected to give evidence of bright attainments,” the Reno Evening Gazette wrote on June 9, 1891.

It was the start of several different locations that have hosted the University’s Commencement Exercises.

Commencement in the original Gymnasium in 1910 was typical of the era. A week-long schedule of events of speakers, luncheons and awards presentations culminated with Commencement morning.

An academic procession formed at Morrill Hall just before the traditional time of 10 a.m. City businesses were encouraged to close or limit hours for the day in order to ensure everyone in the community could attend. The graduates, led by the Cadet band, faculty, distinguished guest such as the Governor of Nevada, Board of Regents and alumni “marched in solemn tread around campus to the gymnasium,” wrote the May 25, 1910 Reno Evening Gazette.

By 1969, and having to deal with the prospect of 553 graduates, the largest class to ever graduate, the exercises moved to the Quad. The speakers’ platform was situated in front of the John Mackay statue that day. Seats had to be borrowed from area schools as the Quad was “turned into an outdoor auditorium for the record-size commencement exercises,” the Nevada State Journal reported on June 8, 1969.

By 1970, more than 4,000 people crowded the Quad. By 1972, the magic of the Quad as a graduation venue was evident. The Most Rev. Joseph Green, the Catholic Bishop of Reno, wrote in the June 10, 1972 Reno Evening Gazette that, “(The 1972 Commencement Exercises) were a deep manifestation of what is needed in the lives of everyone – a dream, the determination and confidence of attaining it through one’s own efforts.”