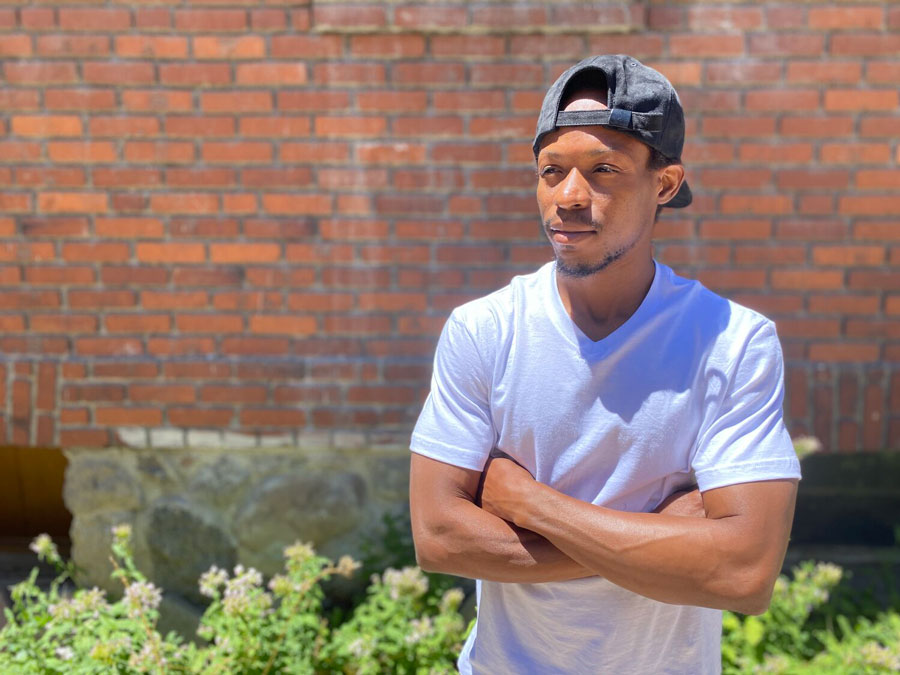 Blaize Abuntori, a master’s student and teaching assistant in the statistics and data science program, has received the Cavanaugh Community Volunteer Award for his ingenuity and compassion in starting the Reno Burrito Project. Abuntori, an international student from Ghana, Africa, was disheartened by the large population of individuals experiencing homelessness in Reno. He recognized just how many people were living without stable shelter or a consistent source of food and decided to do something about it. What started as passing out a few burritos on the street one afternoon quickly became a weekly delivery of hundreds of burritos to individuals in need around Reno. Abuntori recruited fellow students to help him launch and run the Reno Burrito Project, now past its one year anniversary. At the Spring 2021 College of Science commencement ceremony, President Sandoval named Abuntori as being an exceptional role model for his fellow students. Below, he answers a few questions about the Reno Burrito Project, his dedication to community service and his plans for his future.

When did you first become interested in mathematics and statistics? What drew you to pursue a master’s in Statistics and Data Science?

Blaise Pascal was a great mathematician and philosopher and so when I first heard of him and being called Blaize, I wanted to know more. I enjoy mathematics and philosophy to some extent. My interest with statistics really started after my traineeship with the European Food and Safety Authority in Parma, Italy. My supervisor, Federica Barrucci, was very passionate about statistics and this got me moving in this direction.

How did you come up with the idea for the Reno Burrito Project?

I grew up in a big family made up of people who were related by blood and others not. We grew up in a two-bedroom house, but there were at least 12 people there on any given day. There was always food and community. When I got to Reno and saw the homeless, I felt like I needed to do something. I did not have a house to give but I decided to spend $20 a week to give back. I discovered burritos for the first time in my life within that period and it just seemed so convenient. The first week, I bought four and handed all of them out within 100 meters of Roberto’s Taco Shop and so I decided to cook them instead, thinking $20 would go much further if I did that. I called some friends to help—we made 15 burritos, then 30 the next week and we kept on going. I would say the idea came to me or evolved into what it is as time went on.

As a busy graduate student, why do you feel it is important to dedicate your time to helping others?

Everyone is going through some pain and suffering, and a helping hand, little or big, can make a big change in someone’s life.

For most of my life, I was always waiting for the right time and the right steady amount of income to start giving back. I watched my parents give back so much and this is something that has always been in me. I noticed all my excuses and realized that it’s not about how much time or how much money you have (I did not have much), but it was a question of who you want to be and what you want to do, and whether you are willing to sacrifice for it.

Everyone is going through some pain and suffering, and a helping hand, little or big, can make a big change in someone’s life. I have received so many good things being here at UNR and also as a graduate teaching assistant. This was one of my ways of saying thank you.

What has been most rewarding about starting the Reno Burrito Project?

To know that this idea was not stupid and that with a simple idea and consistency you may be surprised how far it goes and the impact it can have. I am so humbled by the amount of love and support from the community. Knowing that sharing a burrito with someone, taking some time to ask them how their day is going can bring so much joy and love. This reminds me of home, where everyone is taking care of everyone in small and big ways.

What is next for you?

The goal is to work in my field here in Reno with my MS as a stem major, while also building the Reno Burrito Project into a nonprofit. The goal is to help people be the change they want to see in the world, be it our volunteers who want to start projects of this nature, or the people who we serve who want a hand up.

What advice do you have for other students interested in helping out in their community?

Start where you are at. There is never going to be a perfect time, life is too chaotic, and everyone has an idea of what you should be doing with your time and life. You know what you want. It is not going to be easy, but it is going to be worth it.