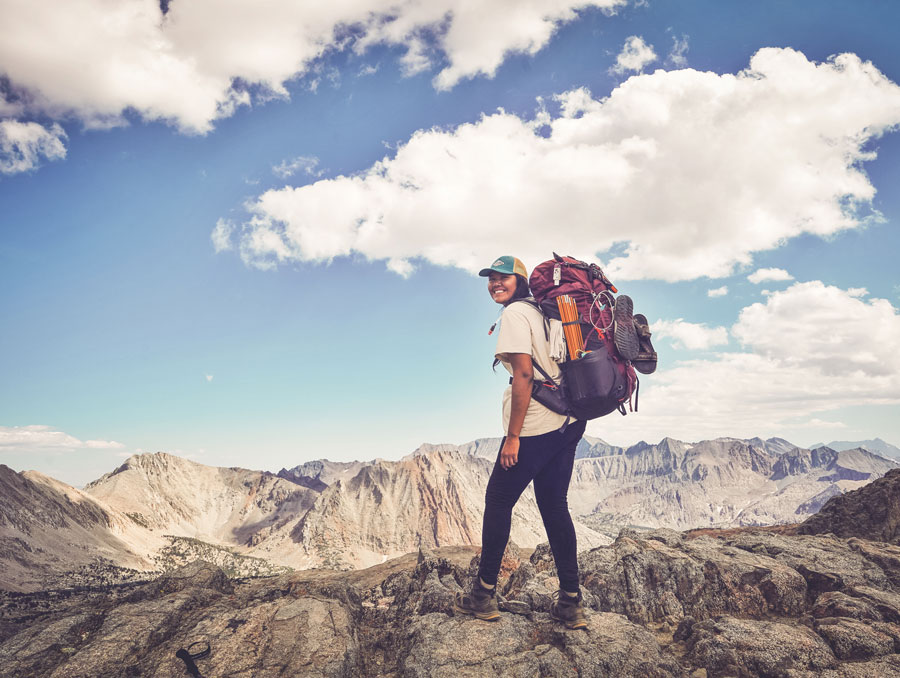 In August of 2018, geography graduate student and member of the Pyramid Lake Paiute Tribe Autumn Harry hiked 190 miles over 22 days along the Nüümü Poyo—the People’s Trail. She was joined by a group of fellow Indigenous women, and as they summited Tumanguya on their final day on the trail, the tallest peak in the contiguous United States at 14,494 feet, Harry decided she’d continue the work she and these women had been doing on their trek after reaching the valley below. They were reclaiming their Indigenous history that had been wiped from the landscape by European colonizers and replaced with the names of white men. The Nüümü Poyo is better known by its English name: the John Muir Trail. And Tumanguya is labeled on most every map as Mount Whitney. As John Muir was inaugurating the John Muir Trail and lobbying for the establishment of Yosemite National Park in the late 1800s, the original stewards of that same land, the Ahwahnechee, Paiute, Miwok, Mono and other tribes, were facing genocide. “A war of extermination,” as proclaimed by the first governor of California Hardeman Burnett, was being waged against the Native tribes as the State-sponsored legislature to hunt and kill California’s Indigenous populations was institutionalized. As the tribes disappeared, so did some of their names for the land and places. Harry and the other women were hiking to bring those names back.

“Most people know the Nüümü Poyo as the John Muir Trail,” Harry said. “We chose to acknowledge our own people’s history and acknowledge that our people have been here for thousands of years. We have names for these places, and we continue to have connection to these lands. We don’t celebrate John Muir or that racist history. Through that hike, we were able to reclaim that trail, honor our ancestors and honor our people. That’s what pushed me into my research.”

Harry is in the Department of Geography’s graduate program and her thesis project is focused on the restoration of Indigenous place names—particularly the Numu, or Northern Paiute, place names in and around Pyramid Lake where she grew up. She had just one day of rest between her 22-day trek with Indigenous Women Hike and her first day of graduate school. And while she originally planned to work with her graduate advisor Kate Berry on the study of Tribal water quality and governance, from that first day off the trail and onward she has remained focused on the mission brought to life hiking the Nüümü Poyo.

“Most people know the Nüümü Poyo as the John Muir Trail. We chose to acknowledge our own people’s history and acknowledge that our people have been here for thousands of years[...]We don’t celebrate John Muir or that racist history. Through that hike, we were able to reclaim that trail, honor our ancestors and honor our people.”

“I’ve always thought like a geographer,” Harry said. “We think about time and space and how those two concepts interconnect. For me, being Indigenous, it’s really important knowing the history of the land that I’m on and knowing that there are stories and people that are connected to that land. I often think about Reno and its now urban setting and how our Paiute people and our Washoe people have been erased from this area. But this is still our territory. Geography is a way for me to dig in to that even deeper and bring an awareness to Indigenous communities that are living and thriving on these lands.”

While a few Indigenous names have been passed down from Tribal Elders and are used within their community, many names are unknown. Pyramid Lake is known by Tribal members as Kooyooe Panunadu, translated as Cui-ui (a local sucker fish species) Standing Water, but many of the dominant peaks, trails and large natural landmarks have not maintained their Numu names even within the Numu community.

“There are only a few names that are well known throughout our community,” Harry said, “Our ancestors traveled long distances to gather, fish, hunt and trade. I know there are older names that exist in the Pyramid area and the lower Truckee region, even in what is now known as Reno. I am deeply invested in learning about our history and learning about our connection to place.”

Harry came across maps archived in the University’s Special Collections and other places that display place names she had never seen before. She plans to take  these maps to the Tribe Elders to get their help in interpreting where the unknown names came from and what they meant. These interviews are crucial to her research and will help her understand how place name knowledge is learned and passed along.

“My focus now is seeing where those names came from. Are they more recent names or have they been passed down for generations?” Harry said. “We have these family systems within our community.”

While Harry speaks some of the Northern Paiute language, her vocabulary is improving through her continued research and interviews with those in her community that are fluent. With the help of the Tribe Elders, she has uncovered what are likely Numu names for places that have been respelled phonetically.

“The goal in talking to Elders is to try and break down the word, it can help identify what that word or phrase might mean,” Harry said. “I’m hoping to learn more about the linguistic side within my research—breaking down these words to try and understand what some of these translations might be. As part of my own journey, this will help me to practice and learn more of my language.”

“There is so much power gained through mapping. When you think about it, as far as colonization and colonial domination goes, the current mapping techniques have worked. A lot of our Indigenous communities are in a place of trying to remember our place names."

Most often used today to get a person quickly from point A to point B (maybe finding a burger joint with a decent Yelp rating along the route), modern maps have sterilized landscapes of their history as cars zoom by. What does remain on these simplified maps are the names for places—generally English names, and, many times, names that highlight negative aspects of our country’s history while silencing the rest. Even though these landmarks and locations are often entered in a mapping app without much of a second thought, the names still hold power.

“There is so much power gained through mapping,” Harry said. “When you think about it, as far as colonization and colonial domination goes, the current mapping techniques have worked. A lot of our Indigenous communities are in a place of trying to remember our place names. For the average non-Indigenous person, it’s really easy to learn the English names because they’ve been so deeply ingrained in our culture and society. For us, we have to do all of this extra digging.”

Reclaiming Indigenous names, especially on government and public-use maps, is a way of correcting how much of U.S. history was written. One recent triumph in Nevada was the official renaming of Jeff Davis Peak in Great Basin National Park. The mountain is now known as Doso Doyabi, or White Mountain—a name chosen by the Duckwater Shoshone Tribe. Tribal Elders chose the name Doso Doyabi, meaning white mountain, as a reference to the fact that the summit used to be capped in snow year-round. The mother of two of the involved Tribe Elders was one of the only survivors of the Spring Valley Massacre—a brutal attack on the Shoshone Tribe during a ceremonial gathering misinterpreted as a war party by the U.S. Calvary in 1859. Indigenous people’s history on the land and connection with Doso Doyabi is paramount in comparison to the four brief and brutal years that mark the Confederacy and Jefferson Davis’s Confederate presidency.

“I think people are now starting to question a lot of these names,” Harry said. “Especially with the current anti-racism movement that’s happening and the colonial statues that are being taken down around the country that honor individuals who caused a lot of harm to Indigenous people and People of Color—I think this is the perfect time to be doing this work. There are ways to make a shift and help our people and our history become more visible. When the public sees these names on these big mapping platforms, it’s a reminder that this is Indigenous land. There is a deeper history here.”

Harry hopes more maps come out that represent not only Indigenous people’s history, but their current existence and connection to the land. By using digital mapping apps, much of the Indigenous story is buried or misconstrued.

“Google Maps, in my opinion, is just boring,” Harry said. “You see it dominated by English names. You see all these imaginary borders like state lines and lines dividing the United States, Mexico and Canada. Google Maps does not represent an Indigenous worldview whatsoever. These types of maps are from a colonial perspective, from a colonizer’s perspective. You don’t see any Indigenous representation on these maps at all. People tend to forget that all of the U.S. is all Indigenous land. Our people were removed from many of these spaces and placed on reservations. Because we’re seen as being isolated to just reservations, our People are not seen as visible on our own land. A lot of Indigenous groups in North America travelled extensively and had a lot of territory. You don’t see that on Google Maps. What you do see is our reservations, and the reservations have borders around them. People think we are supposed to stay within those little boundaries and we’re only allowed to be in those little areas.”

Harry has many creative ideas for enhancing the modern map experience by representing different languages, stories and histories. While sharing the Indigenous place names she discovers publicly will depend on permissions given by the Tribal Council as a way of protecting potentially sensitive locations, Harry hopes that sharing the names within her community will help future generations of Numu people stay connected to the land they have lived on for centuries.

“There are ways to uplift Indigenous narratives and Indigenous perspectives and that’s something I want to do more of with mapping,” Harry said. “I grew up here. I’m 27 and spent 27 years on the reservation, and I’m just now learning about some of these names and just now seeing some of these maps. I’m hopeful that we’ll get to a point that we can share those names within our community so our young people can practice them and actively go out on the land and speak the language. That’s my hope.”

This story was originally published in the College of Science 2020 annual magazine and is being republished today in acknowledgement of Indigenous Peoples’ Day, October 11 2021.