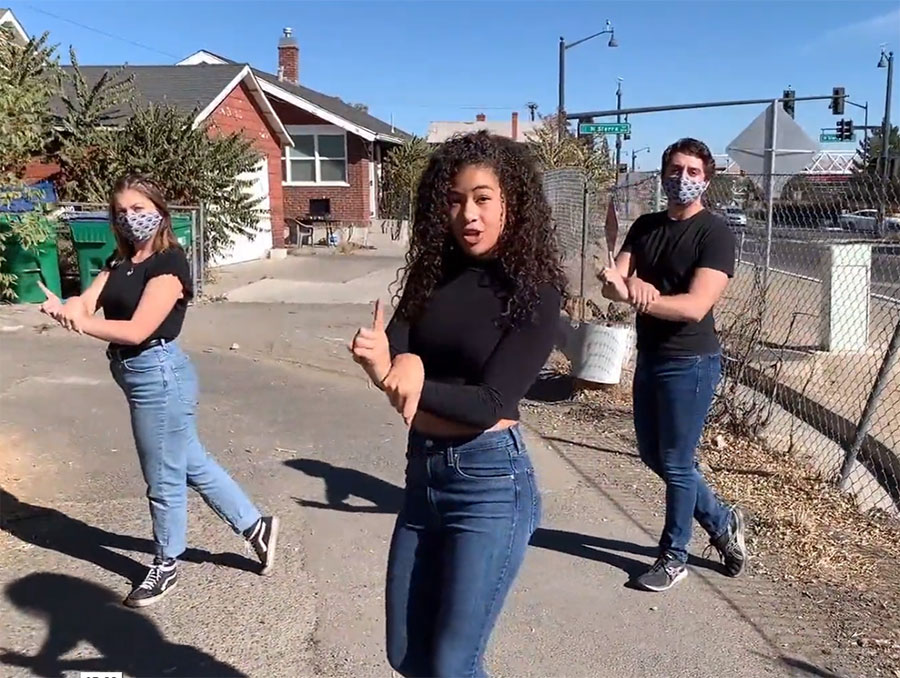 The Department of Theatre and Dance in the School of the Arts has adapted to this new virtual world as any other program has. The silver lining for performing artists in the College of Liberal Arts is that they are able to share unnoticed elements, body language and movement with virtual audiences that may have been missed in person. Attending a dance recital or musical theatre production pre-COVID-19 was exciting in its own right; however, it was impossible to experience all of the elements. While attention was once focused on the lead in a particular number, footwork from another artist or body language from extra choreographers was usually overlooked. Now, as audiences experience theatre and dance virtually, they can see all the precise elements of a production.

This is exactly what the Department of Theatre and Dance at the University of Nevada, Reno did when filming and sharing the recent fall performances. The Fall Dance Festival and the musical theatre production of “Bruised and Brave” were showcased at the end of November. Audience members had the opportunity to watch and re-watch the recordings – enabling them to catch the intricacies of the costumes, the details of specific hand gestures and body language of the entire cast.

“Though we didn’t necessarily have the production team that we would have if we were in the theatre, I will say that our technical costume design specialist Kendra Bell was involved for the entire process and made it possible to have these dances fully costumed,” Cari Cunningham, associate professor of dance, said.

The detail in the costumes was extraordinary, from incorporating face masks into the aesthetics, to the flow of materials used in the outdoor elements where the dances took place.

“Masks were made from vintage handkerchiefs,” Cunningham said. “And for another choreographer’s work, she (and student costume shop assistants) hand embroidered flowers on dresses with ribbons to complete the vision for the dance that took place among the vines and stunning architecture of the stage area in the Honor Court.”

For Assistant Professor of Theatre and Area Head of Musical Theatre Kasey Graham, the details were in the audio. Each musical number was professionally studio recorded. A specialized videography crew filmed some of the student theatre performances and then the production team merged the video and audio footage together to create a spectacular musical theatre experience.

“When COVID put a wrench in our production plans, we picked up that wrench and used it to build a unique piece of musical theatre,” Graham said.

All students and performance staff involved in the Fall Dance Festival and “Bruised and Brave” performances adhered to strict COVID-19 policies. Face masks were worn at all times, six feet or more of social distancing was maintained and even studio recording time was built in with buffer periods to de-sanitize the space.

Despite pandemic hurdles, the entire experience was educational and experiential for students.

“The students spent the first half of the rehearsal process in recording studios, a first for the department,” Graham said. “It was a fantastic way for them to get industry experience while still in school.”

Most student choreographers had never created site-specific dances and enjoyed working with the environment and elements they used for their dance pieces. In addition, many theatre students had never recorded in a studio or had been professionally filmed before. Not only did the students learn what it takes to work with a professional production staff, they also learned how to bring all the various production pieces together for a final performance.

Additionally, what made the virtual showcases a unique experience for audiences was the ability to see a final cut as well as a behind-the-scenes look into the rehearsals. Interviews with students on what each piece meant to them, how it could be interpreted, why they chose the environment or props they did, and footage from practices gave audiences the full picture.

“I love that we gave the audiences both a polished version of the dance filmed from multiple angles as well as a glimpse into this very unique choreographic process and the different challenges and successes experienced by each of these artists,” Cunningham said.

The experience of attending a virtual dance or theatre performance is unique and exciting. Even, for the die-hard performing arts patron, the opportunity to view a virtual showcase will bring additional pleasure for the chance to catch a glimpse of details overlooked before.