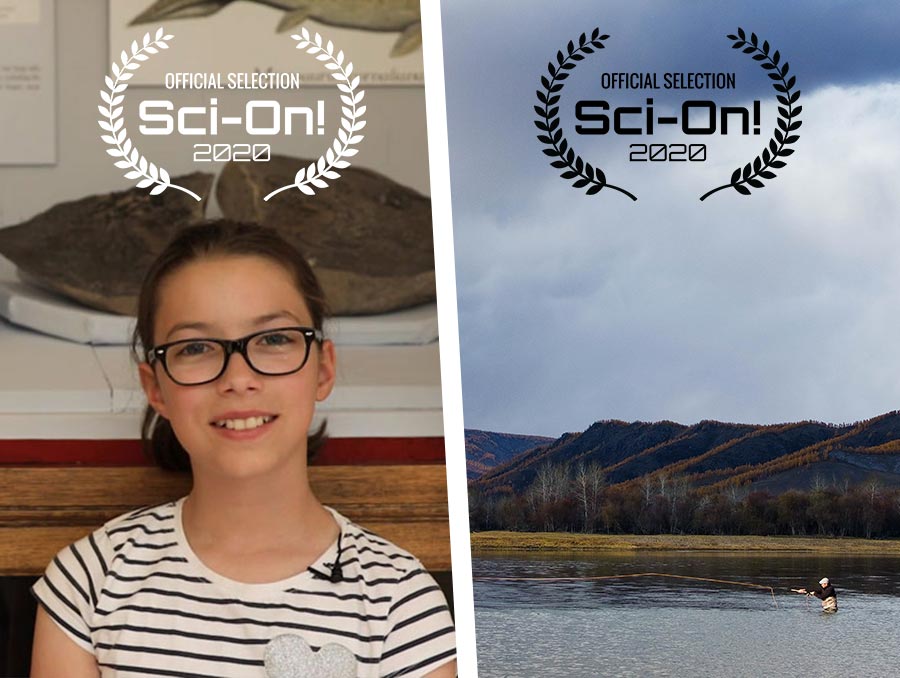 Two films produced by the College of Science will be featured in this year’s Sci-On! Film Festival. Transitioning from live venues to an all-online format, Sci-On! will become Northern Nevada’s first online film festival. Moviegoers will have access to six days of short films, May 4-9, and special events, including a virtual May the Fourth Celebration.

The first of the College’s films featured in the festival is the short documentary Fertile Waters. Located in Northwest Mongolia at the confluence of the Eg and the Uur Rivers, hundreds of miles from the closest urbanized city exists one of the last strongholds of the giant Eurasian trout, the Hucho taimen (known locally as taimen). This endangered fish species can grow up to 72 inches, weigh up to 200 pounds and live as long as 55 years. Researchers from the College of Science, including Professor Zeb Hogan of the National Geographic television show Monster Fish with Zeb Hogan, have been studying the fish and its ecosystem for the past 15 years. Fertile Waters explores how things have changed in this remote area of Mongolia over the past 15 years, and contemplates the future of this unique ecosystem.

Fertile Waters was also an official selection in the 2020 Sigma Xi STEM Art and Film Festival.

The second of the two films is an episode of the College’s video series Mineral Monday. Mineral Monday is an online educational video series exploring the many amazing minerals, fossils, and historical objects on display at the W.M. Keck Earth Science and Mineral Engineering Museum as told by curator Garrett Barmore. Launched in January of 2018, the series has been played in classrooms and homes around the country. In its two and a half years running, the series has expanded to include field trip episodes, episodes in partnership with local Nevada historical and geological organizations and companies, and the launch of the first-ever Mineral Monday competition inviting school-aged children to submit their own videos inspired by the series.

The episode featured in the festival, Mineral Monday with Vera: Ichthyosaur, features the Mineral Monday competition winner Vera. The episode showcases the series’ success in reaching K-12 audiences and getting students interested in geology and paleontology at a young age. In the episode, Vera shares her personal fossil collection and shares her knowledge of Nevada’s state fossil, the Ichthyosaur.

Both films were shot and edited by College of Science filmmaker Jennifer Kent. The two films will be screened on Tuesday, May 5 at 7 p.m. Winners will be chosen by live vote following the screenings.

The festival will be held on May 4-9 with different film categories each day. Pass holders to the Sci-On! festival will have the opportunity to join in on panels, “meet” filmmakers virtually, ask questions, and vote for their favorites. In addition, there are about 30 short films that will be screened including a “Guinness Book of World Records” winner.

From animation and live-action shorts to documentaries and comedies, Sci-On! will feature futuristic technology, from time travel to robots. There’s even the tiniest film every created, shot with an electron microscope. In addition to light-hearted fare and pop culture, filmmakers explore serious issues in space travel and medicine, biology and climate change.

Outstanding directors from Hollywood and NASA join filmmakers from a dozen countries to tell amazing stories. Movie content ranges from conflict with androids and AI (real and imagined) to the amazing research being done to protect endangered wildlife and ecosystems.

The organizers and talent invite you to catch a glimpse of the future or travel back to galaxies far, far away. Attendees could even win a robot or “laser sword.” All proceeds from ticket sales go to support non-profit science education with local and national partners, from the Challenger Learning Center to the Fleischmann Planetarium and Science Center.