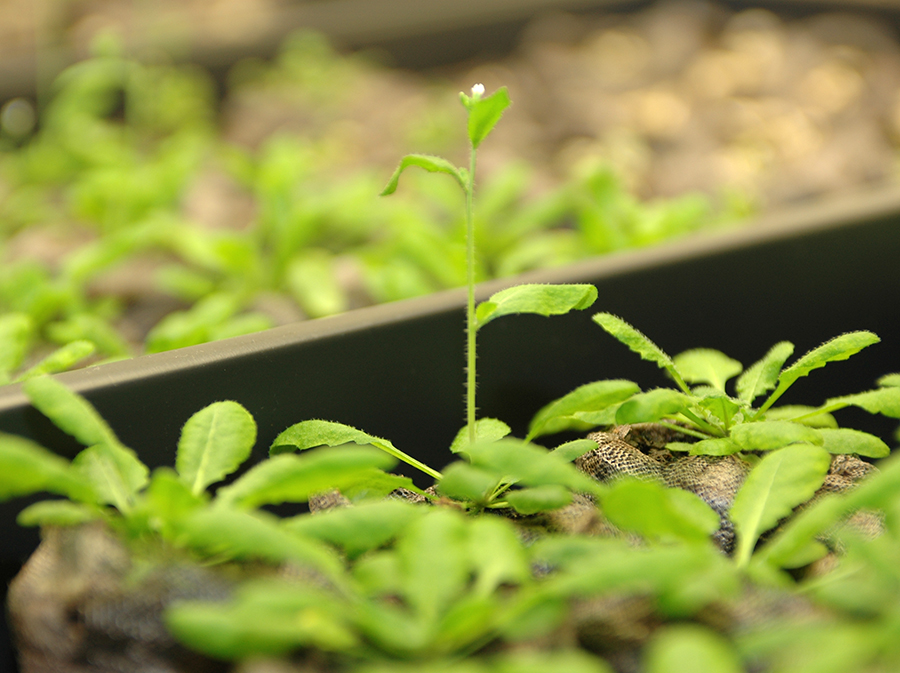 After several years of experimentation, scientists have engineered thale cress, or Arabidopsis thaliana, to behave like a succulent, improving water-use efficiency, salinity tolerance and reducing the effects of drought. The tissue succulence engineering method devised for this small flowering plant can be used in other plants to improve drought and salinity tolerance with the goal of moving this approach into food and bioenergy crops.

“Water-storing tissue is one of the most successful adaptations in plants that enables them to survive long periods of drought. This anatomical trait will become more important as global temperatures rise, increasing the magnitude and duration of drought events during the 21st century,” said University of Nevada, Reno Biochemistry and Molecular Biology Professor John Cushman, co-author of a new scientific paper on plant tissue succulence published in the Plant Journal.

The work will be combined with another of Cushman’s projects: engineering another trait called crassulacean acid metabolism (CAM), a water-conserving mode of photosynthesis that can be applied to plants to improve water-use efficiency.

“The two adaptations work hand-in-hand,” Cushman, of the University’s College of Agriculture, Biotechnology & Natural Resources, said. “Our overall goal is to engineer CAM, but in order to do this efficiently we needed to engineer a leaf anatomy that had larger cells to store malic acid that accumulates in the plant at night. An added bonus was that these larger cells also served to store water to overcome drought and to dilute salt and other ions taken up by the plant, making them more salt tolerant.”

When a plant takes up carbon dioxide, it takes it through its pores on the leaf, called stomata. They open their stomata so carbon dioxide goes in, and then it gets fixed into sugars and all other compounds that support most of life on earth. But, when stomata open, not only does carbon dioxide come in, but also water vapor goes out, and because plants transpire to cool themselves, they lose enormous amounts of water.”

Cushman’s team of scientists created genetically modified A. thaliana with increased cell size resulting in larger plants with increased leaf thickness, more water-storage capacity, and fewer and less open stomatal pores to limit water loss from the leaf due to the overexpression of a gene, known as VvCEB1 to scientists. The gene is involved in the cell expansion phase of berry development in wine grapes.

“Larger cells have larger vacuoles to store malate at night, which serves as the carbon source for carbon dioxide release and refixation, by what’s called Rubisco enzyme action, during the day behind closed stomatal pores, thereby limiting photorespiration and water loss” Cushman said. “And, the succulent tissue traps the carbon dioxide that is released during the day from the decarboxylation of malate so that it can be refixed more efficiently by Rubisco.

One of the major benefits of VvCEB1 gene overexpression was the observed improvements in whole-plant instantaneous and integrated water-use efficiency, which increased up to 2.6-fold and 2.3-fold, respectively. Water-use efficiency is the ratio of carbon fixed or biomass produced to the rate of transpiration or water loss by the plant. These improvements were correlated with the degree of leaf thickness and tissue succulence, as well as lower stomatal pore density and reduced pore openings.

“We tried a number of candidate genes, but we only observed this remarkable phenotype with the VvCEB1 gene,” Cushman said. “We typically will survey between 10 to 30 independent transgenic lines, and then these are grown for two to three generations before detailed testing.”

Arabidopsis thaliana is a powerful model for the study of growth and development processes in plants. It is a small weed-like plant that has a short generation time of about six weeks and grows well under laboratory conditions where it produces large amounts of seeds.

Engineered tissue succulence is expected to provide an effective strategy for improving water‐use efficiency, drought avoidance or attenuation, salinity tolerance and for optimizing performance of CAM.

CAM plants are very smart, keeping their stomata closed during the day, and only opening them at night when evapotranspiration is low because it is cooler and the sun is not shining, Cushman explained. The significance of CAM is found in its unique ability to conserve water. Where most plants would take in carbon dioxide during the day, CAM plants do so at night.

“Essentially, CAM plants are five to six times more water-use efficient, whereas most plants are very water inefficient,” he said. “The tissue succulence associated with CAM and other adaptive traits like thicker cuticles and the accumulation of epicuticular waxes, means that they can reduce leaf heating during the day by reflecting some of the light hitting the leaf. Many desert-adapted CAM plants also have a greater ability to tolerate high temperatures.”

With demand for agricultural products expected to increase by as much as 70% to serve a growing human population, which is predicted to reach about 9.6 billion by 2050, Cushman and his team are pursuing these biotechnology solutions to address potential future food and bioenergy shortages.

“We plan to move both tissue succulence and CAM engineering into crop plants. This current work is proof-of-concept,” Cushman said.

The work was funded by the Department of Energy, Office of Science, Genomic Science Program.