The Difference Between Past and Present: Pandemic Edition 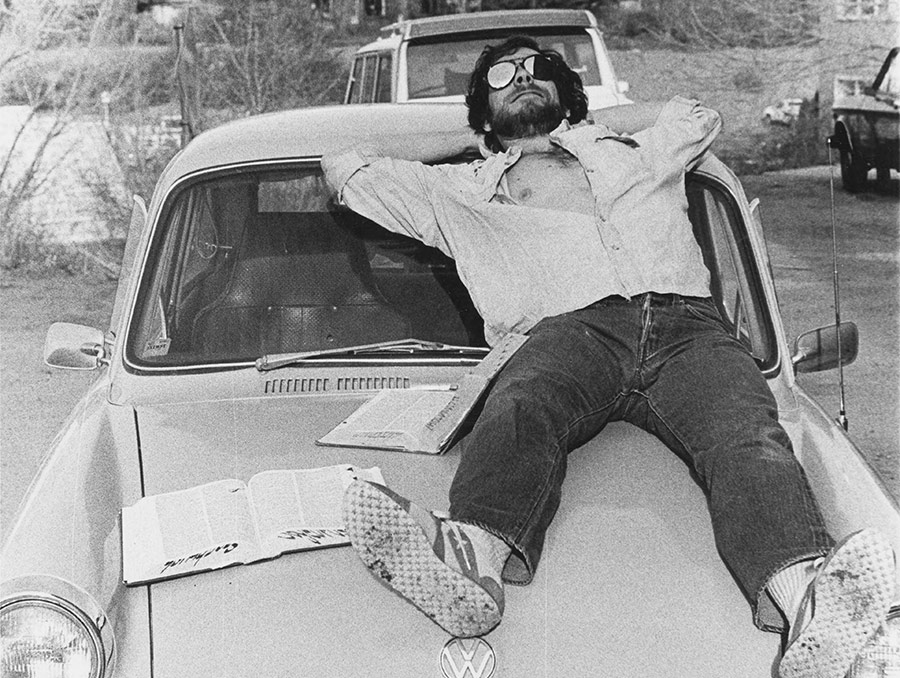 The Difference Between Past and Present: Pandemic Edition

My historic photograph and my pandemic recreation of that photograph have many similarities and many differences. For the most part, I recreated this image in just the way it was originally taken. Laying on a car in Reno was my first step towards my masterpiece. Next, getting a hold of some type of books to lay on the car with me was another characteristic I was able to include for this picture. Then, being able to find a nice background with trees in the distance was the last step. It was somewhat hard to find a good and open place to conduct this photograph, but luckily I was able to take this picture in the parking lot located at the top of the school. I was able to wear a button-up t-shirt and sunglasses like what the student in the picture has on. I chose my favorite sunglasses as they seemed to go well with my recreation despite not having that exact glare that the original picture presents. Laying on a designated car was a specific part I needed to be careful of too. I needed to be located on the driver’s side of the hood, along with having my legs spread out a certain distance, and having my arms correctly placed behind my head. Having the two notebooks open on the hood of the car had to be specific as well. One needed to be placed near the lower part of the front, right headlight, while the other one needed to be placed on the hood of the car and my right thigh. Having a nearly identical background consisting of some trees really helps bring the recreation together. On top of that, I also took the time to do some editing and make my picture black and white instead of in color. This made it look like my photo was taken in the same time period as the historical picture despite the model and age of the car and the quality of the image.

As for differences, I was unable to wear jeans for this photo because I simply do not own any of any sort. I also had to use notebooks instead of textbooks because all of my textbooks for this semester are e-books. My picture doesn’t have as many dead trees in the background as the original picture does mainly because we haven’t truly hit prime fall yet when all the leaves fall off. The contrast between past and present tells us a lot about how time has and hasn’t changed. I can say that even though we are going through tough times right now with a pandemic, people’s attitudes can still be portrayed in a positive way. This picture forces a good laugh from present viewers and likely from past viewers as well. This recreation also shows that cars, photo quality, and even clothing apparel have sincerely changed throughout the past and present. We have come a long way from where we were, but that shouldn’t stop us from having a good time and keeping our heads up.