Trevor J. McMinn Research Professor of Biology works to understand insects including butterflies and other pollinators, and to affect public perception of insects in the Western United States 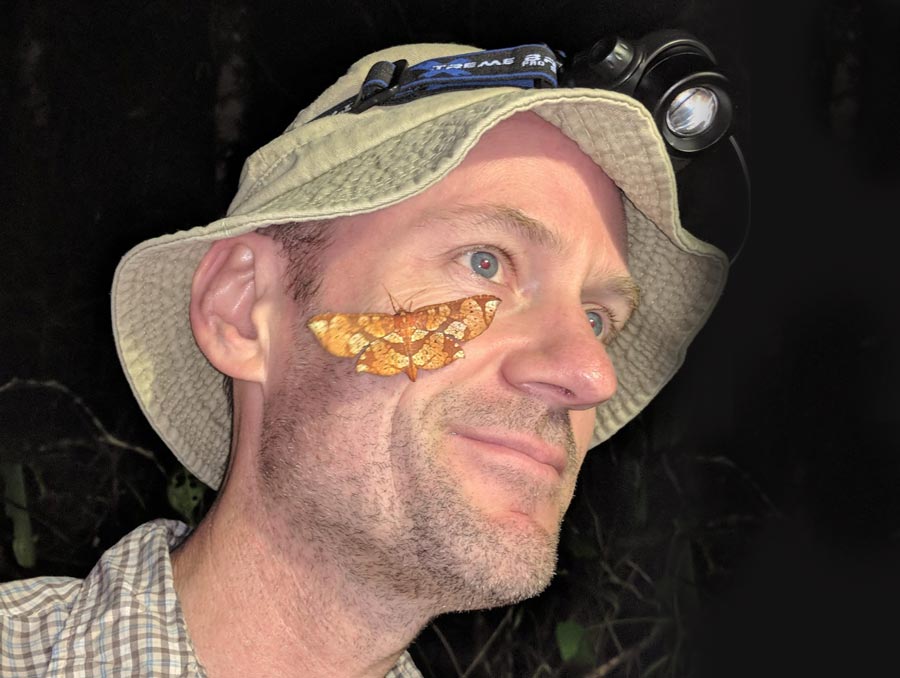 Trevor J. McMinn Research Professor of Biology works to understand insects including butterflies and other pollinators, and to affect public perception of insects in the Western United States

Since joining the College of Science in 2008, the Trevor J. McMinn Research Professor of Biology Matt Forister quickly rose through the academic ranks earning many well-deserved accolades along the way. His McMinn named professorship was awarded to him in 2015 and in April of 2020 he was recognized as a University of Nevada, Reno Foundation Professor—a title awarded only to the best at the University. Forister’s record of teaching and scholarly work is impressive. From his extensive and impactful publication list (his research publications have been cited over 6200 times) to his engaging and enthusiastic teaching at both the graduate and undergraduate level, his nomination for Foundation Professor by College of Science Dean Jeff Thompson was more than merited.

“Matt is an exceptional faculty member and has continuously excelled at teaching, research and service since joining the University,” Thompson said. “His career at the University epitomizes the best in our faculty and I am proud he will be honored with the Foundation Professor name.”

There is one more modest name Forister has been given during his time at the College: the butterfly guy. Much of Forister’s research has focused on monitoring and interpreting butterfly populations and diversity in the Western United States. Often found hiking the Sierra Nevada Mountains with a butterfly net in hand, his knowledge of the winged insects of the West is unrivaled.

“Butterflies are one of the most visible representations of complex ecosystems because of their interactions with numerous plants and other animals,” Forister said. “By monitoring butterflies, we can better understand and preserve the natural landscapes of the Western U.S. that we value so much.”

Forister’s Western butterfly research project is the continuation of the largest and longest-running butterfly monitoring study in North America and one of the largest in the world. It was started at UC Davis by Dr. Art Shapiro, Forister’s graduate advisor. Now, with over 45 years' worth of data behind him, Forister is taking the lead. But he isn’t stopping there. Forister is currently working on expanding this impressive data set by incorporating information gathered by two citizen-science-based research projects. Forister is incorporating data first from the North American Butterfly Association counts where experts lead groups of citizen scientists on monitoring walks each summer. These counts occur all over the country and, in some cases, have been occurring for decades. Forister will also be using data collected by the smartphone app iNaturalist where users are invited to upload images taken of wildlife for identification. The consequence is an incredible amount of data about where plants and animals live.

With this additional data, Forister hopes to get a more complete picture of what butterflies in the west are doing, potentially identifying new species and habitats in need of protection.

“Ultimately, this added data could lead to identifying new suites of butterflies to think about in the West for conservation,” Forister said. “The monarch has lots of attention and is actually getting money for restoration, which is wonderful. But whenever I talk to groups about butterflies, I always tell them the monarch is actually the 20th to 25th worst declining butterfly in our region. There are many butterflies doing far worse. We’re trying to figure out who they are now in a broader way so people can act on it.”

Ph.D. candidate and research assistant at the Forister Lab, Chis Halsch, spends much of his summer hiking Castle Peak as part of Forister's Western butterfly monitoring project. Researchers hike each of the designated sites (the Castle Peak loop is an impressive 10.5 miles!) on a bi-weekly basis to identify and count an incredibly diverse set of butterfly species.

"We know enough to act now"

Forister’s research has evolved over the years to not only interpret the data but to provide actionable solutions for the declines in insect populations. In his 2019 paper titled Declines in insect abundance and diversity: We know enough to act now, Forister calls conservationists and policymakers to action, stating that with all the data on insect declines collected and documented, “it is now time for the development of a policy consensus that will allow for a swift societal response.”

Forister believes people’s fascination with butterflies can serve as a catalyst for change and he hopes to influence responses on both the large and small scale, even encouraging those with backyards to consider those spaces as potential safe-havens for butterflies and many other pollinators as well as birds that rely on the insects.

“Insects and butterflies, in particular, have a remarkable power to motivate people to change what they do in a way that other plants and animals don’t always have,” Forister said. “Other plants and animals that people want to conserve are often much more distant—perhaps a rare mammal or bird somewhere—whereas if you live in the West and you think about what plants to put in your yard and you don’t cover them with poisons, you can see amazing insects without having to travel more than a few feet out your back door.”

Looking toward the future

In addition to his ongoing butterfly population monitoring, Forister is exploring some new areas of research in 2020. In partnership with the Hitchcock Center for Chemical Ecology, Forister is using legumes (plants in the pea family) in the Great Basin as a model for understanding how the chemistry of plants in the West influences how insects interact with them. He is also working with the Fish and Wildlife Service on the study and conservation of the Carson Wandering Skipper, a federally protected butterfly.

While much of academic life and research practices across the country and world have seen significant adjustments with the onset of the COVID-19 pandemic, Forister has been able to continue with his research mostly unimpeded with the support of the College and University. Being the exceptional professor and advisor that he is, his main concern is for his graduate students.

“I do believe it’s important to make people as independent as I can as quickly as I can,” Forister said of his graduate students. “I prefer to have people that are colleagues right away rather than students working for me. Coming out of this recession, they will need to be excellent to get and keep jobs. That’s something I think about constantly—how to help them become excellent.”

Despite any changes the University and Forister’s lab may face in the coming year, one thing that he and his graduate students will not lack is access to the plants and insects they study.

“I always feel very lucky to be a biologist exactly here,” Forister said. “The natural resources that we have access to are just amazing. For grad students, too. Having them working in ecology here lets them be in touch with such a diversity of natural environments that it’s just a ridiculously great opportunity.”

Forister has been and continues to be a leading researcher and teacher, contributing greatly to the University’s R-1 status. Being named Foundation Professor is a testament to his invaluable contributions.

“The level of recognition Matt brings as a scientist and professional to the University of Nevada, Reno is paramount,” Thompson said. “I most strongly endorsed Matt for recognition as a University Foundation Professor, and I look forward to seeing how he exceeds the expectations of this well-deserved title.”