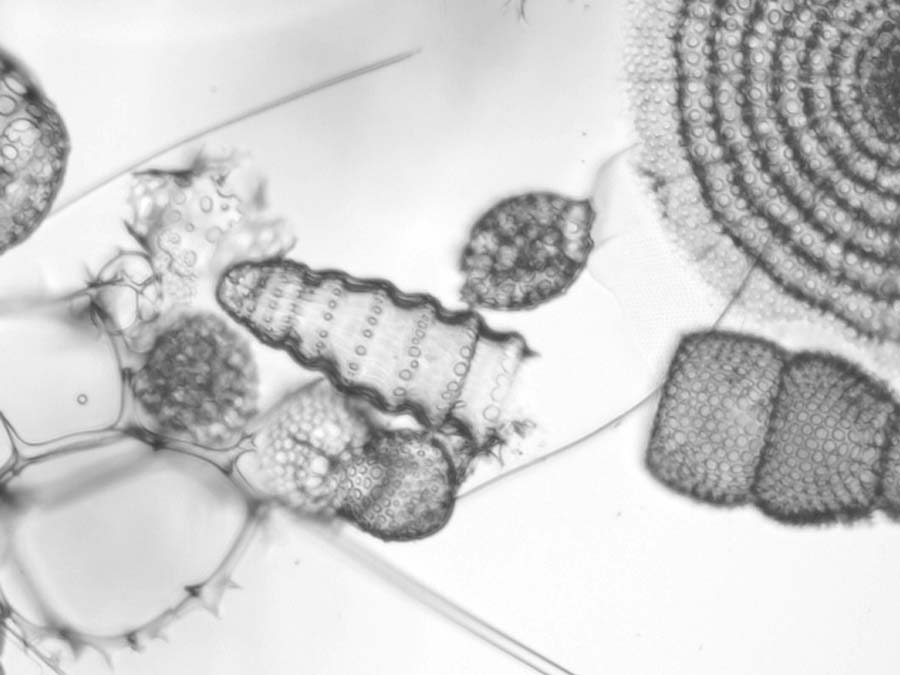 Marine plankton—the foundation of many marine ecosystems, producers of about half of the oxygen we breathe, and regulators of carbon dioxide in our atmosphere—may be at risk of extinction as our planet continues to warm, according to a study led by Ph.D. candidate Sarah Trubovitz and published in the journal Nature Communications. Plankton living in the world’s coldest waters surrounding Antarctica, the Southern Ocean, are at highest risk of disappearing as temperatures rise. In an investigation of an abundant group of microscopic plankton called radiolarians and their reaction to temperature shifts during the Neogene period several million years ago, it was discovered that large changes in temperature led to dramatic decreases in polar radiolarian biodiversity. Trubovitz’s findings contradict previous assumptions that marine plankton did and would migrate to follow favorable climate conditions in the event of large temperature shifts, instead confirming extinction as a more likely response. The implications of this research for marine plankton in our rapidly warming climate are dire.

“There are approximately 100 radiolarian species currently living and adapted to cold conditions in the Southern Ocean, many of which will be unable to survive as the climate continues to warm,” Trubovitz said. “The extinction of these radiolarians alone will significantly lower the biodiversity of high-latitude ocean ecosystems. Furthermore, the amount of warming projected in the next 300 years is comparable to the amount of cooling that occurred at high latitudes over the last 10 million years. Since change is happening at such a rapid rate, there will not be time for evolutionary processes, such as the origination of new species, to offset extinction. We don’t know enough about ecological interactions between plankton species to say exactly what will happen, but we should anticipate some cascading effects throughout the marine foodweb if a significant number of radiolarian species go extinct.”

Trubovitz started this research with the goal of completing the first full census of tropical radiolarian species over a 10-million-year interval of the Neogene and Quaternary periods. A similar survey of polar radiolarians completed in 2013 by Dr. Johan Renaudie showed that a large assemblage of radiolarian species in the Southern Ocean had disappeared from polar environments as the planet cooled several million years ago. However, he could not determine whether the missing plankton had migrated to warmer waters, as ecologists suspected, or if they had gone extinct. With the support of her advisors Drs. Paula Noble (Professor in the Department of Geological Sciences and Engineering) and Dave Lazarus (Museum für Naturkunde, Berlin), Trubovitz embarked on the tedious process of identifying and cataloging tens of thousands of tropical radiolarian fossils found in deep-sea sediment samples to see if she could uncover the missing polar species.

“Once the deep-sea sediment samples were processed and mounted onto slides, the first thing I noticed was the remarkable number of radiolarian morphospecies, many of which could not be identified by my colleagues or from illustrations in previous radiolarian literature,” Trubovitz said. “I had known we lacked a full inventory of tropical radiolarian species, but had not accounted for the sheer number of undescribed species in my samples.”

Over the course of a year, Trubovitz had carefully patched together the first complete inventory of tropical radiolarians—a sweeping catalogue of species, some unknown to science until now. Amidst the vast species diversity, she was surprised to find one group missing. When comparing the species known to have been lost in the polar regions to her tropical data set, Trubovitz was able to determine that a large majority of these missing polar radiolarians had not migrated to warmer waters. They had, in fact, gone extinct.

“It was surprising how few polar species were able to successfully colonize the low latitudes as global climate cooled,” Trubovitz said. “The change occurred relatively slowly (over several million years) while warmer habitats were present and connected to the poles via ocean currents. So, we would have expected more radiolarian species to utilize this pathway to track their preferred temperature conditions as climate cooled. Instead, they were unable to relocate to suitable habitats as global temperatures dropped and went extinct.”

After confirming the extinction of polar radiolarians as a result of the cooling climate, Trubovitz and her team expected to see a similar pattern of biodiversity loss in the tropics where temperatures also cooled.

“In the tropics, there was a minor decline in temperature, as well as other environmental factors at play, but none of these elicited a change in the number of radiolarian species or their relative abundances in the community,” Trubovitz said. “We might have expected tropical radiolarians to show a similar pattern to polar radiolarians, perhaps undergoing some diversity loss proportionate to the amount of temperature change they experienced. Instead, it seems that radiolarians are tolerant of minor environmental change, but major ecological shifts and extinction occurs once their tolerance threshold is surpassed.”

Implications for the plankton of global warming

As global temperatures rise, it is unlikely that marine plankton populations will make it through uncompromised. With temperature shifts predicted to jump as much as 7 to 10 degrees Celsius in the polar regions, the coldest ocean climates will be eliminated all-together.

“Many living marine plankton species may be at risk of extinction due to anthropogenic climate warming, particularly those adapted to present cold conditions at the poles,” Trubovitz said. “Not only does this one group of plankton appear to have difficulty moving between biomes in general, but high-latitude species will not have the opportunity to track their preferred habitat conditions because those habitats are disappearing from the globe.”

“There are a lot of differences between what happened over the 10 million years of global cooling and what is happening now. The current rate of warming is happening so fast. It is hard to say that tropical radiolarians will be safe because they won’t have as much time to adapt. On the time scale of millions of years, radiolarians can tolerate 3 degrees of warming. They cannot instantaneously respond to even tiny changes in climate.”

While the tropical radiolarians were shown to have survived minor shifts in temperature during global cooling, they had 10 million years to adapt to the temperature change.

“There are a lot of differences between what happened over the 10 million years of global cooling and what is happening now,” Trubovitz said. “The current rate of warming is happening so fast. It is hard to say that tropical radiolarians will be safe because they won’t have as much time to adapt. On the time scale of millions of years, radiolarians can tolerate 3 degrees of warming. They cannot instantaneously respond to even tiny changes in climate.”

The paper, titled “Marine plankton show threshold extinction response to Neogene climate change,” was authored by Sarah Trubovitz, David Lazarus, John Renaudie, and Paula Noble. Trubovitz plans to expand her research of radiolarians and their environments, continuing to study the group as a postdoctoral researcher after completing her Ph.D.

“The next step for me is to look at radiolarian dynamics further back in time, up to about 16 million years ago, when the climate was relatively warm,” Trubovitz said. “This will give us a longer time series of radiolarian data, and allow us to investigate the impacts of a wider range of climatic variation. I hope that after finishing my Ph.D. I can continue to study radiolarians in environmental context as a postdoctoral researcher, contributing to a better understanding of their climate sensitivity and roles in marine ecosystems.”