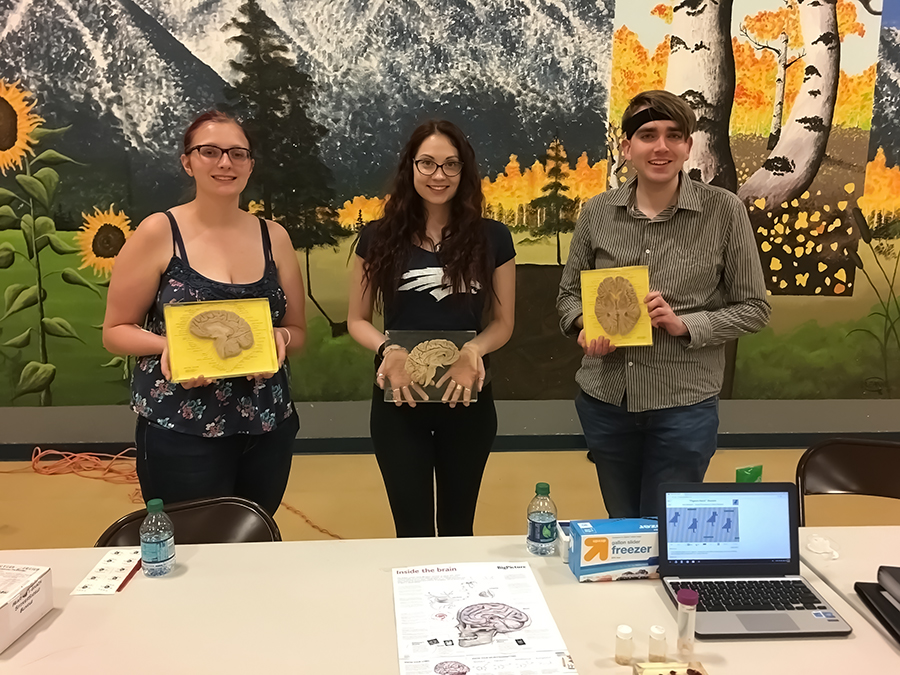 Taissa Lytchenko, a third-year graduate student in the College of Science’s Cognitive Brain Sciences graduate program, has been awarded the Next Generation Award from the Society for Neuroscience, the largest neuroscience society with nearly 37,000 members worldwide.

The Next Generation Award honors Society chapter members who have made outstanding contributions to public communication, outreach and education about neuroscience. The award is given to an individual at the junior faculty level and an individual or group at the pre/postdoctoral level.

“This reward is incredibly meaningful for myself and our neuroscience outreach group at UNR,” Lytchenko said. “Without the amazing team effort, none of this would have been possible.”

Lytchenko, while pursuing her doctorate in Cognitive and Brain Sciences at the University, has also provided leadership, mentorship and creative energy for Brain Awareness Week outreach events supported by the Sierra Nevada Chapter.

“Along with  (Biology Department Teaching Assistant Professor) Amy Altick’s biology classes, with her support and guidance, I have expanded the Graduate Student Association’s Cognitive Brain Sciences Outreach Club to have an active list of undergraduate and graduate members, which serve as volunteers at our events at local schools and venues, teaching kids and adults about the brain,” she said.

Under her active engagement, the Cognitive Brain Sciences program is busy year-round, providing programs for summer camps for K-12 students, running workshops for teachers and STEM fairs for elementary and middle schools and visiting juvenile detention centers as well as adult jails.

“In our programs we have a variety of interactive stations, such as the anatomy station using real human and animal brains, the electrophysiology station using robotic/human interfaces and illusion station using a presentation of illusions to teach about our perception, to name a few,” Lytchenko said.

“It is remarkable to see what Taissa has been accomplishing,” Gideon Caplovitz, a professor in the psychology department who supervises Lytchenko’s graduate studies, said. "I couldn’t be more proud. She has established herself as that rare-kind of scientist who is able to conduct high quality and cutting edge research while at the same time being able to communicate complex and sophisticated ideas about how the brain works to a wide audience outside of the scientific community. She is truly an ambassador for our University, and to see her efforts acknowledged by such a prominent organization as SfN is really an honor for us all.”

Lytchenko is also a very active member of the University’s Graduate Student Association as a council member.

“Since she became involved in 2018, Taissa has consistently taken on leadership roles within the GSA by serving as the chair of the elections committee and the clubs and organizations committee,” Senior Advisor Veronica Zepeda said. “Her fellow council members have recognized her efforts by voting her as Council member of the semester twice over the last two years. In a short time, she has made outstanding contributions to graduate student life on our campus and I have no doubt she will do the same throughout the rest of her graduate career and beyond.”

Lytchenko took leadership of a graduate student neuroscience club and expanded it to have a full membership base, which serves as a pool for volunteers for the events. In addition to conventional outreach presentations, Lytchenko has been deeply involved in the fledgling “Frontiers for Young Minds.”  As a Science Mentor for the journal, she takes research articles rewritten for grade school-age children and oversees a peer-editing review of the articles. With her guidance, the reviews are conducted by kids within Washoe County School District and beyond. Their help ensures the articles are accessible to their intended young audience.

“I, along with some of my team members, serve as a mentor for the journal helping kids review articles for publication,” she said. “It is such a joy to work with young reviewers, getting them directly involved in science from a young age and increasing the amount of scientific knowledge available to other young minds across the globe at an easily-digestible level.”

Lytchenko has built a strong record of sharing her knowledge of and passion for science, especially with underprivileged children and adults.

“Two of my most memorable events were The Freak Show at the Discovery Museum, where we taught adults brain anatomy and the structure and function of neurons; and a neuroscience presentation we conducted at a local juvenile detention facility on Parr Boulevard using real brains,” she said. “The response from attendees at the second event was so moving, I was inspired to expand our outreach effort by holding a book drive last year for the adult jail to provide them more scientific literature and hosting a presentation event at the jail, which is in the planning stage now.”

As an undergraduate, Lytchenko was head of PSI CHI, an International Honor Society in Psychology, as well as a research assistant in the College of Sciences’s Psychology Department for professors Gideon Caplovitz and Lars Strother. She is pursuing her doctorate degree in the Cognitive Brain Sciences graduate program under the direction of Caplovitz.

“Her research is focused on understanding the neural basis of paying attention, and how the organization of visual information interacts with how we pay attention to it,” Caplovitz said.

“While I am accepting the award, I must share the credit with my team,” she said. “They inspire me to keep growing in my endeavors and are the unwavering support in any idea we may have. I am truly grateful for each and every one of them.”

The Society for Neuroscience is an organization of nearly 37,000 basic scientists and clinicians who study the brain and the nervous system.

“The Society is honored to recognize this year’s winners, whose efforts to inspire students of all ages, as well as adults and the general public, reflect a passion and enthusiasm for STEM outreach and health literacy,” Society for Neuroscience President Barry Everitt, said. “In addition to conducting their own research in neuroscience, they have found creative ways to reach out to the larger community, and especially underserved populations, to instill an appreciation for brain science and health.”

This year’s award ceremony was virtual because of the pandemic.