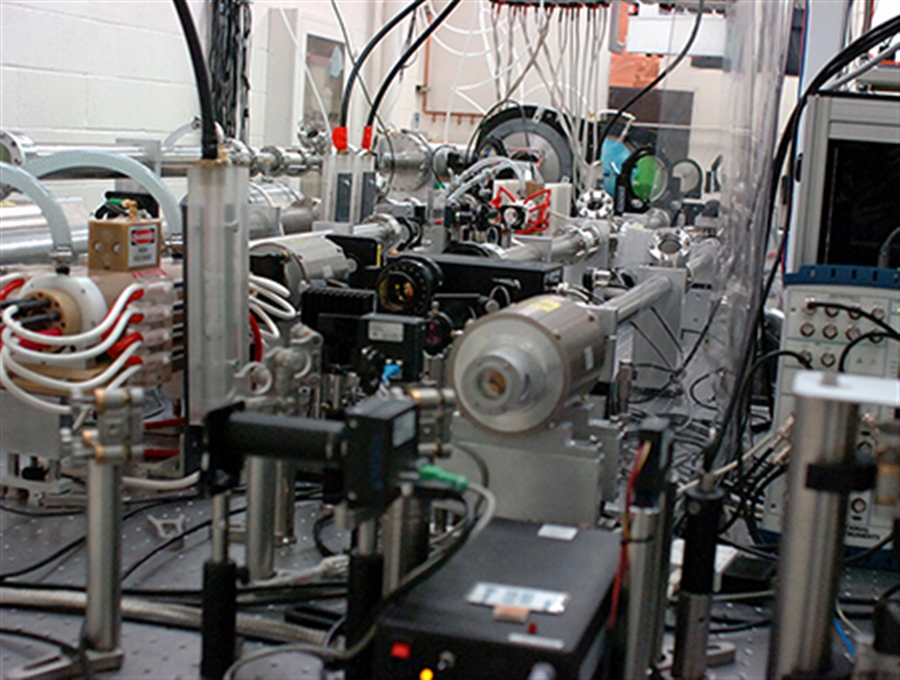 The modeling approach established in this work could be used as a predictive tool to simulate radiographic images of complex 3D solid objects without carrying out radiation-based experiments.

A high intensity laser can produce an intense x-ray beam in the laser-target interaction. Such laser-produced x rays have been applied for recording x-ray images of various objects including a compressed laser fusion fuel, but a numerical tool for the quantitative comparison of a radiographic image has not been available until now.

“A challenge to a realistic simulation of laser-produced x-ray radiography is its spatial scale,” Sawada said. “Generally speaking, numerical modeling simulates physics phenomena in much smaller spatial scale than actual experiments. To overcome this limitation, we have separated modeling into two steps: x-ray generation is calculated with a fine resolution spatial grid, while computation of x-ray images using the calculated x-ray source is performed with a coarse grid to reproduce an x-ray image at a real experimental scale. Furthermore, a 3D Computer Aided Design-like model of a test object allows us to directly compare experimental and simulated images.”

Laser-produced x-ray sources could be an alternate source of non-destructive industrial imaging and medical imaging from soft tissues to heavy metal objects, the team of scientists have found through experiments with chirped pulse amplification using a tightly focused laser beam and several target materials.

The NSF-funded work is published in Plasma Physics and Controlled Fusion. In this paper, they present experimental benchmarking of numerical modelling for fast electron and x-ray source characterization as well as broadband x-ray radiography. The work shows both qualitative and quantitative agreement between the experiment and the simulation for different x-ray attenuation filters.

Sawada, a faculty member in the College of Science, and physics undergraduate student Chris Salinas started working on the modeling project in Spring 2018.

“This work would have never been published without the help of students,” he said.

“Measurements of spark plug images were not originally planned in our two-week experiment conducted in December 2013.” Sawada said. “When the experiment began, a delivery of diagnostics from my collaborators was delayed due to a snowstorm. All we had were metal targets to be shot and x-ray imaging detectors. In order not to waste the beam time in the Zebra Pulsed Power Lab, we started shooting the targets and taking x-ray images of tools and electronic parts we could find in the lab so that at least we could get visually appealing x-ray images. Anthony and Brandon came up with an idea of radiographing a motorcycle spark plug, and it turned out images we got show clear, distinct intensity contrasts. Then, we used it for a systematic study of how image quality varies by changing x-ray attenuation filters that we found pieces of polyethylene, aluminum and brass in a machine shop.”

Since the invention of a laser amplification technique called the Chirped Pulse Amplification, which was awarded 2018 Nobel Prize in Physics, the peak power of a tightly focused laser beam has been steadily increasing, making such a laser available for a variety of applications other than laser pointers or laser lighting displays.

High energy x-rays produced by intense short-pulse lasers interacting with a solid has been studied for a broad range of applications, such as basic plasma science, medical imaging and industrial and national security applications. Laser-produced x-ray sources have advantages of a small source size, short duration, high photon numbers and tunable x-ray spectrum compared to a well-developed x-ray tube.

"The creativity and the dedication of faculty and students in the academic research environment is what distinguishes research projects supported by the National Science Foundation," said Vyacheslav (Slava) Lukin, Program Director for Plasma Physics at the National Science Foundation. “In this project, Professor Sawada's research group advanced development of predictive capability for x-ray radiography in ways that will surely pay dividends in both fundamental and applied research down the road.”

This work was supported by the National Science Foundation under Grant No. 1707357.

The team’s article, “Development of a predictive capability of short-pulse laser-driven broadband x-ray radiography”, was published by IOP Publishing in their journal Plasma Physics and Controlled Fusion in April.