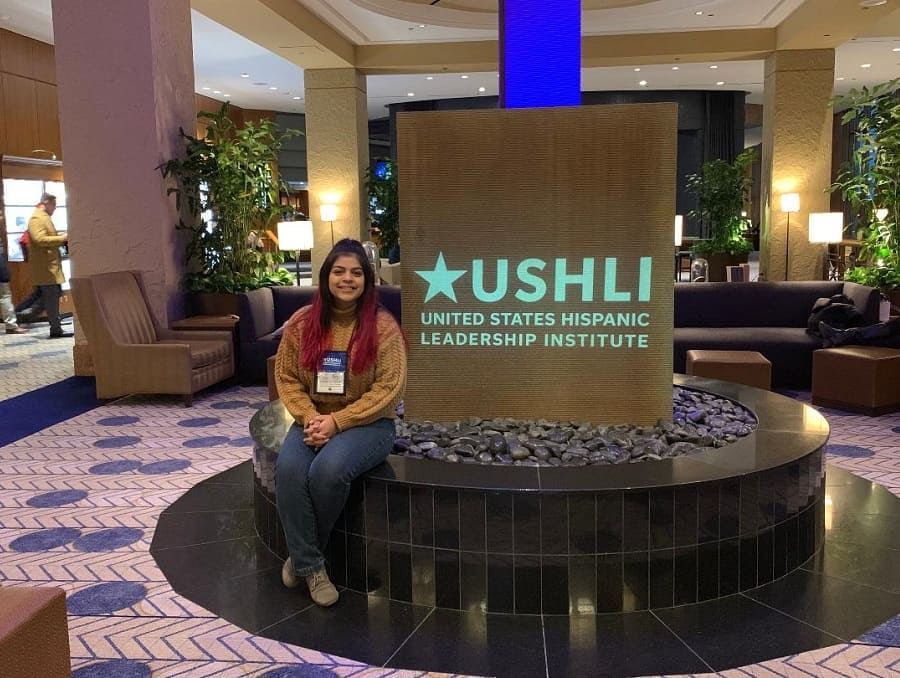 With support from the Latino Research Center at the University of Nevada, Reno three first generation Latina women were given the opportunity to attend the 38th annual United States Hispanic Leadership Institute conference along with a dozen selected students earlier this spring. This conference provided young Hispanic students with workshops for self-development as well as networking opportunities. These three students all have diverse academic backgrounds; Gabriela Meza is a Social Work major with a minor in Addiction Treatment Services, Rosario Alvarado is a Chemistry major with a Mathematics minor, and Diana Meza is a triple major studying International Affairs, Women’s Studies, Spanish Literature and Culture and has a Translation minor. Despite this, during the conference there was one particular workshop they attended that covered a topic that resonated deeply with all of them: Imposter Syndrome.

Imposter Syndrome, simply described, relates to a psychological experience that is very familiar to many first generation and/or minority students. It involves feelings of doubt, of not belonging, not feeling good enough and attributing success and accomplishments to luck alone rather than one’s own hard work. All having faced Imposter Syndrome at some point in their lives, these students share their experiences addressing this issue at the USHLI conference as well as how they’re learning to manage these feelings today.

Throughout this conference, Latino students from all over the country were asked to attend workshops that intended to make them better leaders and professionals in their communities. One of the offered workshops was hosted by Marisel Herrera: an educator, life coach, and author. Herrera, like myself and many others, has herself fallen victim to this internalized and unsubstantiated syndrome that can overpower and inhibit our possibilities and potential.

During the workshop, Herrera provided tips to help combat and discourage Imposter Syndrome’s control over our lives. These tips have given me the means to challenge that which makes me feel inadequate in environments that were created for the success of white males. Among the things she shared, Herrera emphasized the importance of giving a name to what this is: Imposter Syndrome. It allows us to voice these feelings, call them out for what they are, and acknowledge that unless our feelings are backed up by facts, we should not let them define us. She encouraged the use of “I am” statements to empower us and highlight our uniqueness. She voiced the need to stop doubting and give ourselves “permission” to be in rooms and situations where we feel inadequate. We should “do it afraid.” Overcoming Imposter Syndrome is neither easy nor a linear progression, but courage is never the absence of fear and to overcome our own dangerous, sometimes debilitating mindset, we must do things afraid.

Feelings of not belonging and being afraid to be seen as “other” are some of my continuous struggles. If I want to take back my potential, who I am, and become confident in things I want to do, I- like many college students around me- must start addressing and correcting the thoughts and emotions that have made me feel like a fraud as a first-generation Latina woman.

Looking back at that workshop, I can honestly say that every point Ms. Herrera made during her presentation left deep, positive impressions on me and I am thankful to have been able to receive it. It hasn’t been until now, nearing the end of my college experience, that I can finally name the feelings of doubt and not belonging that have followed me throughout my path in Chemistry.

The amount of times that I contemplated switching my major because I didn’t think I was smart enough to be a chemist, or the times that I’ve been at the top of my class while feeling like I didn’t deserve to be there, are countless. The constant dread I’ve felt during my interactions with my colleagues due to fears that they’d realize I didn’t know as much as them or that they’d discover that I was not meant to be in this major has often been disempowering.

The lack of Hispanic or even women mentors in the Chemistry department has been discouraging and I have often doubted my abilities because of a belief that there might actually be a reason behind the lack of us. For a long time, I wanted to know why I wasn’t good enough, but after listening to Ms. Herrera, it was evident that I was the only one who did not think I belonged or was good enough. Instead of being a voice of encouragement, more often than not I was the one who tore myself down and stopped myself from being the best chemist I could be. Having a name for these feelings has allowed me to start changing my opinions of myself because I realized that I not only often work twice as hard as my colleagues but that I don’t have to prove that I deserve to be here because I simply do.

Being a Latina in a field that is predominantly male is a harsh reality, but I will no longer allow myself to cling to thoughts or feelings of not being good enough. Being a minority should not stop us from reaching our fullest potential and neither should Imposter Syndrome.

During this conference, the Imposter Syndrome workshop I attended was particularly challenging for me to sit through because many of the feelings Ms. Herrera described were those I had been in denial about for a long time. In order to not think about feelings of inadequacy, I very early on began to overload my schedule. I triple majored, I volunteered, I studied abroad, I interned, I joined a research program, I joined clubs, and I worked until I was so burnt out that I began to question whether college was what I wanted to do after all. For me, hearing Ms. Herrera exclaim, “You have nothing to prove to anyone!” was a painful wake up call. While I love everything that I do, I realized that I was doing most of it to prove that I deserved my place in this campus.

In addition to this workshop, I was also able to meet a very inspirational Latina doing amazing work in Public Policy at this conference. During a conversation with her, I happened to mention the Imposter Syndrome workshop that I had attended and was extremely surprised to hear that she, a very knowledgeable and successful woman, often deals with Imposter Syndrome herself. That conversation provided some advice that I am now actively working to implement into my own life to this day.

She began by emphasizing that Imposter Syndrome doesn’t mean there’s anything wrong with us, but rather that it comes from a lack of representation; we often put pressure on ourselves to be “the best” because when we look at the tables we’ve sat in we’re often the only minorities or women there. She stressed the importance of finding mentors with our similar backgrounds to talk to because more often than not, these mentors will be quick to tell us that they have dealt with the issue as well and that can be reassuring in moments when we don’t feel good enough. But above all, she stressed the need to remind and praise ourselves for our successes. We need to look back at where we have succeeded, stop attributing these moments to luck, and indulge in the joy of having done something we’re proud of. Acknowledging success allows us to begin to accept our potential and eventually it will allow us to fully claim our achievements in the future.

Many successful people deal with Imposter Syndrome (some including Michelle Obama, Alexandria Ocasio-Cortez, and Jennifer Lopez) and I was very fortunate to be able to address this issue at a conference where I was surrounded by many people who were quick to reassure me and that, in itself, was the first step in me addressing this issue. For the students who feel like they don’t belong, maybe your first step in facing this problem is finding a space that makes you feel like you do belong. For me this space has been the Latino Research Center at my university, and it has provided me with many incredible growth opportunities like this conference.

And as I conclude my reflection, I’d like to end with a quote by Anontio Tijerino that I think many of us who deal with Imposter Syndrome should remember in our moments of doubt: “You are not lucky to be here; the world needs your perspective. They are lucky to have you.”