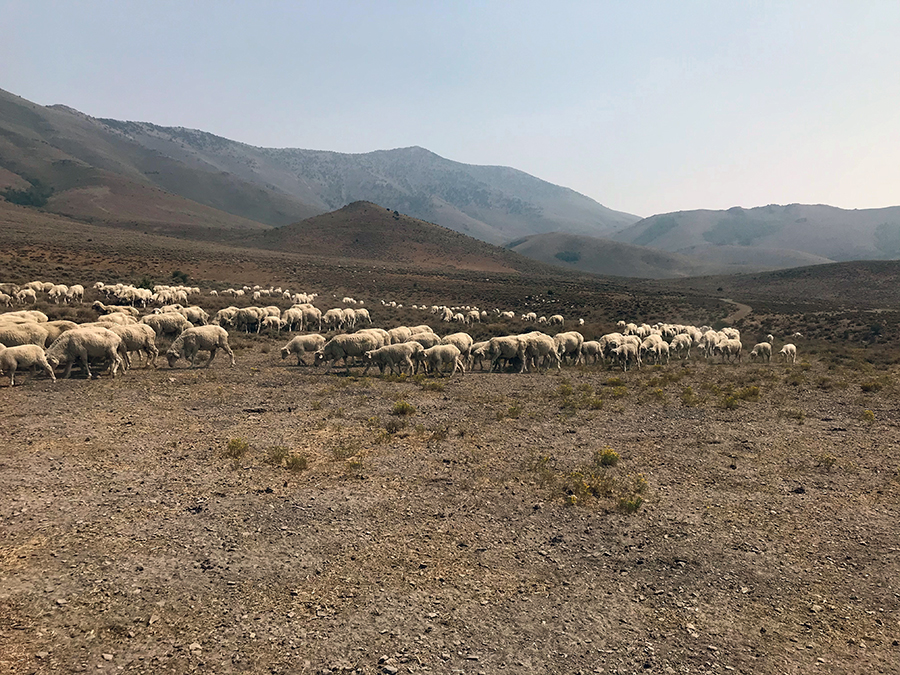 The College of Agriculture, Biotechnology & Natural Resources’ new Great Basin Research and Extension Center in Eureka County has begun operations in a new initiative for rural Nevada. It will address the related issues of sustainable grazing management of dryland rangelands, livestock, crop production under water-limited environments, and alternative water and irrigation strategies for crop production.

“This operation will address real world problems through research and Extension – providing useful knowledge to the ranchers and farmers of Nevada,” Bill Payne, dean of the College, said. “It’s also a Nevada showcase, as much of the world looks like this, and the knowledge we generate here will be useful throughout drylands of the world.”

Drylands are defined as areas in which lack of moisture limits crop and/or pasture production during part of the year, and generally occur in arid, semi-arid and dry sub-humid regions of the world. Drylands constitute about 41% of the earth’s land surface, including most of Nevada.

Payne added that the beginning of operations of the Center coincides with the launch within the College of the new International Center for Sustainable Dryland Agriculture. He noted that 2.5 billion people, or 30% of the world’s population, including most of the world’s poor, live in drylands and face several common challenges including desertification, salinization, soil nutrient depletion, poor water quality, invasive species, declining biodiversity and soil erosion. The Center in Eureka and the International Center were created to address such issues at state and international levels.

The Center in Eureka found its new home through the generous gift of the Ruby Hills Mining Company, LLC, which is donating the ranch to the University.

“We are excited to be part of bringing a world-class research and extension center to Eureka,” Jack McMahon, representative of Ruby Hill, said. “Ruby Hill Mining Company, LLC is a committed local business partner and we support the efforts of our ranchers and farmers. This center will enable the University to carry out pertinent research and outreach to address future challenges in local farming as well as supporting global needs that will bring long-term benefits to the community.”

“We really appreciate the support and generosity from Ruby Hills Mining Company, LLC, for our new Center and the community,” Payne said. “It makes this important project possible, and we are proud to have them associated with the Center.”

Payne said there are three main focuses at the Center: sheep genetics and management, range restoration and improvement, and water-efficient cropping systems for water conservation and production.

“This fits exactly into the goals of the Experiment Station – contributing knowledge and meeting the needs of stakeholders,” Chris Pritsos, the College’s associate dean for research and director of the Experiment Station, which is overseeing the operation, said. “Ranchers and farmers have unique challenges and problems that the research faculty can help them address and solve.”

At the center of the operation is the world-renowned Rafter 7 herd of sheep, which was purchased by the University in July. One of the first major projects for the University under its operation of the Center held the annual Rafter 7 sheep auction on Sept. 12, which attracted buyers from around the world. Of the approximately 1,800 head of sheep in the herd, 230 sheep were up for sale.

The sheep are both purebred Merinos and Rambouillet/Merino crossbreeds that were initially developed about 30 years ago under the direction of Hudson Glimp, professor emeritus of animal biotechnology at the University, in order to improve the national and State of Nevada sheep industry. The effort was generously supported by the Weigand Foundation. Subsequently, the herd was sold and moved from the Walker Lake area to the Eureka area. The sheep are extremely well adapted to rangeland production and to producing fine wool despite the harsh climate. Genetically, the herd has made major contributions to Western U.S. and international sheep industries.

“Right now, we are busy with getting the ranch and Center established,” Pritsos said. “We’ve already built a new lambing facility. We’ll take a year to get the operation fully going. Right now we’ll operate as a production herd, selling rams, lambs and wool.”

But the Center isn’t just about selling sheep. It will also help fund more research, more programming through Extension and other projects that will adapt to the needs of the community.

The Center will ultimately include an administration, teaching and laboratory facility; herder and labor housing; refurbished domestic/stock well and water system; modernized irrigation facilities; and a redesign and reconfiguring of sheep corrals. The ranch has three 120-acre pivot sprinklers producing alfalfa hay and other forage crops, a cattle feedlot, and a dryland crested wheat pasture.

At an elevation of 6,481 feet in central Nevada, the Center is about 250 miles from the University’s main campus in Reno, and about 100 miles southeast of the Gund Research Ranch, also managed by the Experiment Station.

“One of our goals with this project over the past two years has been to get us out of the Reno-centric perspective and expand our presence throughout the state,” Pritsos said.

Payne agreed, “It is important to understand that the Experiment Station has a statewide mandate, similar to Extension. It’s been decades since the College has taken an active new step with a facility of this size outside of the Reno-Sparks area, but this is what land grants are supposed to do, work elsewhere – around the state. We’re happy about it, but also have on a sober set of glasses too, as there are a lot of unknowns and hurdles to jump.We have high hopes, but we are sticking our necks out a bit.”

At the helm of the Great Basin Center operation is Gary McCuin, interim director of the Center and long-time Extension educator for the University in Eureka County. With his new assignment, he’ll be splitting time between the two positions.

“I am excited and intrigued by the potential that this Center has to help us meet the mission of this land-grant institution, and the needs of our producers,” he said.

The mission of Extension is to discover, develop, disseminate, preserve and use knowledge to strengthen the social, economic and environmental well-being of people.

“I see the Center as a means of achieving Extension’s mission through applied research and operations of farming, rangeland and livestock production, and conveying the knowledge gained through these endeavors to stakeholders in Nevada, the West and globally,” McCuin said.

McCuin is a cowboy and rangeland manager by trade and education. He is also fairly local, having grown up and worked on ranches within a hundred miles south of Eureka. He’s been working with Pritsos and Payne on getting this project off the ground for the past two years.

“This position will greatly expand my ability and that of University researchers to deal with real-world and real-time challenges and opportunities faced by producers,” he said. “If we keep our focus on dealing with the issues, problems and challenges of our stakeholders, then we can fulfill the missions of a land-grant university and Extension.”

“While this year is an extremely challenging time for agriculture due to extreme economic and environmental anomalies, it also offers great opportunities to become innovative in production, marketing and education to benefit our stakeholders. If it will benefit our producers, then meeting the challenges will be worth the effort.”