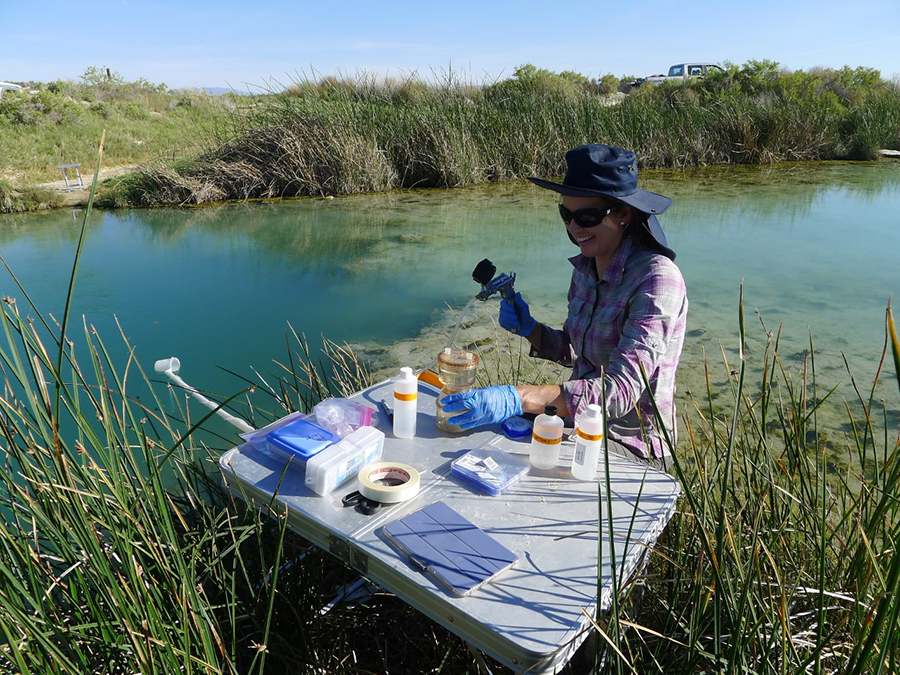 Building on decades of successful research to develop exploration tools for the geothermal industry, the Great Basin Center for Geothermal Energy at the Nevada Bureau of Mines and Geology is leading a Department of Energy project that aims to accelerate discoveries of new, commercially viable hidden geothermal systems in the Great Basin region of the Western United States.

The DOE has awarded the University of Nevada, Reno program $10 million to build a playbook for industry that includes combining the techniques of play fairway analysis, machine learning, advanced geostatistics and other analytical techniques into a comprehensive, holistic, integrated exploration toolkit.

“We propose developing a best practices workflow that combines boots on the ground mapping with the most advanced analytical techniques to find optimal sites for geothermal exploration and resource development,” said Bridget Ayling, director of the Great Basin Center for Geothermal Energy and lead scientist on the four-and -a-half-year project, titled "Innovative Geothermal Exploration through Novel Investigations Of Undiscovered Systems."

Ayling has assembled a “who’s who” of scientists who have worked in geothermal related areas for more than 20 years. It’s a strong team of more than 30 collaborators at 12 partner institutions, including public and private organizations, such as the United States Geological Survey, National Renewable Energy Laboratory, the Utah Geological Survey, Lawrence Berkeley National Laboratories and Idaho Geological Survey. The multi-institutional team comprises a strong and diverse blend of experts, with a long history of successful collaborations focused on discovering, modeling and development of geothermal resources. Many team members have previously collaborated on major and successful geothermal projects.

The project will help drive down costs and risks associated with the discovery of hidden geothermal systems in the western USA. Hidden systems are systems that show no surface characteristics such as hot springs or steam vents. This will help the geothermal industry as they develop more renewable energy resources for the electrical power grid around the west.

The study area is a world-class geothermal province with more than 1,200 megawatts of existing installed capacity from about 28 geothermal systems. Studies indicate far greater potential for conventional hydrothermal systems in the region, but most of these resources are hidden.

“Ultimately, this is to reduce exploration costs, to de-risk the process,” Ayling said. “This is not just a Nevada based project, it includes most of the Great Basin region, and will include studies and drilling in neighboring states. This is a rare opportunity to do extensive work in a larger area, to merge our expertise and learn from four regions.”

Around half of the DOE award, $5 million, will be used to drill geothermal exploration wells that will likely be between 1,000 and 3,000 feet deep.

As emphasized in the grant proposal for this project, “We stand at a major crossroads in the advancement of geothermal technologies. Major achievements have been made in play fairway analysis, 3D and conceptual modeling, resource capacity estimation, machine learning, the application of advanced geostatistics and value of information analysis. But these techniques have yet to be combined into one over-arching best-practices workflow. Our ambitious project proposes to fully integrate these techniques to develop a comprehensive, exploration toolkit.”

The project builds off of the Nevada Play Fairway project that ran from 2015 to 2019 that set out to find economically viable hidden systems, and was under the direction of Jim Faulds, director of the University’s Nevada Bureau of Mines and Geology, which is a research and public service unit in the College of Science at the University and serves as the state geological survey for Nevada.

“We put ourselves in a good position for this grant with our previous successes,” Faulds said. “This is the next big step. Play Fairway was regionally successful, finding two systems with economic development potential. The first Play Fairway project was more limited in scope and represented the first major attempt to combine multiple datasets to find hidden systems. We learned a lot.

“This new project is Play Fairway on steroids and includes additional datasets and more advanced techniques to evaluate how best to integrate various datasets. The earlier project was one-third of Nevada, now it’s the entire Great Basin Region, almost all of Nevada and eastern California, western Utah, southern Idaho and southeastern Oregon, too.”

The regional study area of the Basin and Range province stretches from the Sierra Nevada on the west to the Wasatch Front on the east, including the most tectonically active parts of the Great Basin Region. This includes much of the incipient transform plate boundary of the Walker Lane, which accommodates about 20% of the dextral motion between the North American and Pacific plates in the western Great Basin Region. There is strong correlation between active tectonism and relatively high-temperature geothermal systems in this region.

“There are some geologic similarities throughout the Great Basin, but we will account for the differences; it’s okay to find sites that are different, it will help the outcomes,” Ayling said. “The key output for the geothermal community includes software tools and algorithms and favorability maps, with a web portal that anyone can download and use the data we generate.”

The group from the Great Basin Center for Geothermal Energy and Nevada Bureau of Mines and Geology has experts in geologic modeling, structural geology, geodesy, geostatistics, geochemistry, and database management and dissemination. The project team also includes:

“Nevada’s work to support geothermal energy plays a critical part in the development of viable, renewable sources of energy to power our state while protecting our environment,” said Senator Jackie Rosen in a news release about the DOE awards. “This grant funding, which will be used to support investment in geothermal research and development, will help to create a cleaner future for the Silver State.”

In July, the DOE announced that five projects will receive up to $28 million to promote the advancement of the next generation of geothermal energy technologies. The University of Nevada, Reno was one of those projects. Selected by the Office of Energy Efficiency and Renewable Energy’s Geothermal Technologies Office, these projects align with the goals of the 2019 GeoVision study, which outlines a path to unlock the full potential of geothermal power as a clean, reliable and affordable energy source for American homes and businesses.