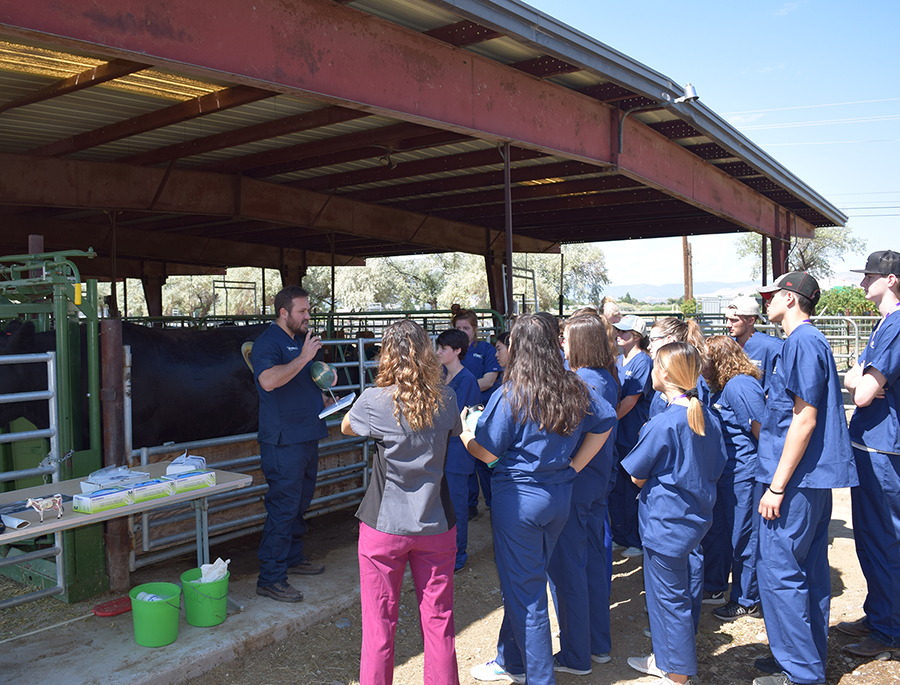 Mozart Fonseca has received a distinguished Regents’ Rising Researchers award for 2020. He is an assistant professor of beef cattle production and applied modeling in the Agriculture, Veterinary & Rangeland Sciences Department.

“I feel very grateful and fortunate to receive this prestigious recognition,” he said. “It represents a story of innumerous hours of hard work, dedication, collaboration, friendship, mentoring and commitment to fulfill our mission within the state of Nevada.”

Fonseca came to the University in the College of Agriculture, Biotechnology & Natural Resources almost four years ago. Since then he’s been busy with research, teaching and outreach – and building and developing his lab.

“Since 2016, we’ve been fortunate to have approved about 10 grants and published some 19 peer-reviewed papers so far,” he said. “There are a lot projects going on right now that resonate very well with Nevada.”

In addition to the scientific papers, since coming to the University Fonseca has nine conference abstracts and he has given 49 invited presentations about his research findings both in the United States and internationally.

“When I arrived here six years ago, I was chagrined to find that this land-grant university’s College of Agriculture hadn’t a single researcher devoted to beef cattle production, even though beef cattle constitute by far Nevada’s most important agricultural commodity,” Bill Payne, dean of the College said. “We recruited Dr. Fonseca to address this gap, and it has been very pleasing to see his career take off in terms of competitive grants, high impact publications and innovative research.

“In addition to being an outstanding researcher, Dr. Fonseca comes from a ranching background, engages with producers and is leading efforts to better understand and manage beef cattle production systems in Nevada.”

Fonseca was born and raised in a remote rural area in southeast Brazil. He received his bachelor’s degree in Agronomy Engineering and a master’s in Animal Science from Federal University of Viçosa, Brazil. After one year of his doctoral studies in Animal Science, Fonseca was awarded a research excellence fellowship and moved to the United States to pursue education in applied statistical modeling at Texas A&M University, where he remained until the end of his graduate education. Upon completion, Fonseca accepted a position as Postdoctoral Research Associate at Texas A&M working with mathematical nutrition modeling before coming to the University in 2016.

In his Mathematical Nutrition Modeling Laboratory, he has been using basic science to answer broader questions among different fields of scientific inquiry by modeling the complexity of systems. He integrates research from different fields into a product of common interest. He uses structural based modeling approaches to solve current problems and develop decision making tools to evaluate consequences of actions and policies, qualifying and quantifying systemic behavior, delays and their consequences over time.

The main objectives of Fonseca’s research programs are the description and characterization of feeds, estimation of nutrient supplied by feeds and required by animals, and predictions of nutrient requirements – and especially those related to water consumption by livestock. Overall, he intends to provide tools for the decision-making processes optimizing feeding systems, production efficiency and profitability of animal production systems.

And if he wasn’t busy enough with research, his incessant energy keeps him going to teach a number of graduate and undergraduate courses. His courses include: the Fundamentals of Animal Nutrition, Advanced Nutrition Management, Beef Cattle Management and Applied Quantitative Methods for Agricultural Sciences, Special Topics in Veterinary Medicine and has been invited lecturer for Food Safety and Meat Industry. He is director of the Mathematical Nutrition Modeling Lab in the College.

In addition to making an impact on Nevada agriculture, Fonseca makes an impact on his students. Arturo Macias Franco was a Senior Scholar who graduated in 2018. He was a veterinary science student who later added agricultural science for a double major.

“It was the best decision I could have made,” he said. “During my second semester, I had the pleasure of meeting Dr. Mozart Fonseca; his guidance allowed me to keep moving forward and helped me discover a new passion in research.”

Fonseca is also faculty in the Environmental Sciences Interdisciplinary Graduate Program and the College’s Experiment Station.

Across the span of the Nevada System of Higher Education the Board of Regents awarded two Rising Researcher awards this year and it just so happens they both came to University of Nevada, Reno faculty. In addition to Fonseca, Kostas Alexis in the College of Engineering is the other recipient of the award.